Roland Emmerich’s 10,000 B.C. is such an authentic and realistic portrayal of primitive man, it is clear he did all his research by watching THE FLINTSTONES. 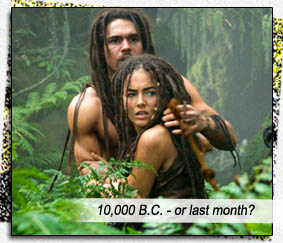 I never knew a movie could annoy me from its first minute.

It is 10,000 B.C. A camera pans down on a prehistoric village – and a “narrator” starts – not just any narrator – Omar Sharif, doing his best caveman James Mason.

The appearance of the first discernible language has always been a contention, but I’m pretty sure the gutter whore language of English was not invented yet. Okay, maybe they’re speaking in rudimentary grunts but the FILM is translating so that we won’t need subtitles. I’ll live with that – but the movie won’t let up…

In the village community hut, a tribal gathering (made up of so many colors and ethnicities it looks like a Benetton ad), where we realize: No Breasts. Not even a hint of side-tit. So PG-13 was invented in caveman times! It’s all clear now – that’s why the MPAA have the brains of Neanderthals.

Suddenly – Uncle Bully. Cliff Curtis: Maori badass B-Actor, one of the tribal elders, name of Tic Tic (because they haven’t invented the word “tac” or “toe” yet). It’s 10,000 B.C. – for the love of the earth god, use “unknowns”! (And appearing in this movie guarantees they’ll stay unknown – so it all works out.)

Into this gathering is thrust a young white girl with blue eyes (blue eyes not yet in the human gene pool – but that doesn’t stop the film), regarded as a prophecy/curse, and wailed over by an old woman elder. 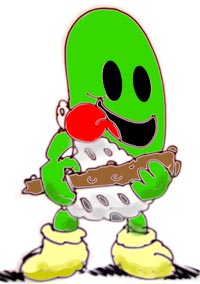 Everyone argues over the blue-eyed chick and we realize that not only is everyone speaking English, but in those provincial times when tribes were closeknit communities, they should all be speaking with the same inflection – yet they all speak in different accents, as if this village is some cosmopolitan travelers’ haven, all of them using modern American vernacular that would make a Geico caveman proud.Five minutes in and my annoyance meter is red-lining.

A fight breaks out among the white American boys – no, don’t be silly, they don’t fight like the savage beasts they would be emulating, they’ve evolved PAST the fisticuffs stage straight to Ali vs. Frazier. Everything about this movie is geared to be annoying to anyone over 13.

So the blue-eyed chick and the hero boy grow up, looking like they’ve just come off the latest Giorgio Armani runway with their aquiline noses and pale skin that looks like it’s never soaked up a shaft of sunshine let alone been raised on the wild plains. To further annoy us, their names are straight out of a French Romance novel of the 1800’s – Evolet and D’Leh. Yes, there’s an APOSTROPHE in the guy’s name – English isn’t invented yet, but they’ve got the audacity to use an APOSTROPHE!

By now, I’ve thrown so much good china at the screen I’ve got to order takeout just for the containers.

Never before have I welcomed the arrival of special effects – Mammoth party time! But writer-director Roland Emmerich and his visual effects team have a surprise up their sleeve for us, as all the shirtless white hunters join the hunt by running on a treadmill in front of a rear projection, or chroma-keyed onto a landscape. You heard me: the same way they made George Reeves “fly” in the black-and-white SUPERMAN television series – that’s what this movie uses in 2008 to “make-believe” these Geico dudes are on the plains of ancient Africa somewhere. That’s how much Roland Emmerich wants to insult us.

The plot is as asinine, cookie-cutter and stupid as the rest of every single second of this movie. A barbarian tribe from The Bronze Age (how else do we account for their steel manacles and locks when our hero dopes still can’t master wooden spears yet?) kidnaps the blue-eyed chick, and French Flintstone (with Uncle Bully) follows their trail over mountains and mountains and more mountains – and then treks across mountains (did I mention he walks across mountains?) to find her.

On a studio set dressed with fake snow, Uncle Bully somehow has the temerity to try to pull off an Oscar Death Scene. (“Oscar Death Scene” denoted by taking all of ten minutes to fall down and die after being fatally stabbed, delivering a five-minute monologue and your own eulogy).

On their way, they encounter other tribes – actual BLACK AFRICAN TRIBES, mind you – who join their quest to walk to the ends of the Earth, which is about ten miles across some sand dunes. Note that not even amongst these African tribes do we see one flash of woman-breast. National Geographic not invented yet.

Even the premier CGI effect of this movie – the saber-toothed tiger – is about as exciting as watching a computer program rendering a saber-toothed tiger. Thanks for the three minutes screentime, Roland – I’ll get my computer animal fix from WALKING WITH DINOSAURS next time.

At the ends of the Earth, they discover a technological race of humans busy building PYRAMIDS! It’s STARGATE meets ONE MILLION YEARS B.C. – but even Raquel Welch’s scanty animal-skin bra and panties revealed more in 1966 than any of these presumably hairy-backed ape-women here.

Due to the thorough research and authenticity invested in this film, it is history in the making, as we actually see the invention of:
– Amway Pyramid Schemes;
– Dick Clark;
– the Slow Clap;
– PG-13 Valor, in not touching a spankingly hot woman during torturous journey to homeland;
– Fred Flintstone;
– “Dressing up Like a Lady,” invented by the head barbarian, later called Transvestitism or Elton John;
– the constellation Orion;
– bondage and discipline;
– the English Language;
– the rear-projection method used on George Reeves;
– Astral Projection, when the old tribal woman gives up her soul so that the blue-eyed chick can live;
– the Implausibly Happy Ending.

Thank our lucky stars for Roland Emmerich and Geico cavemen!