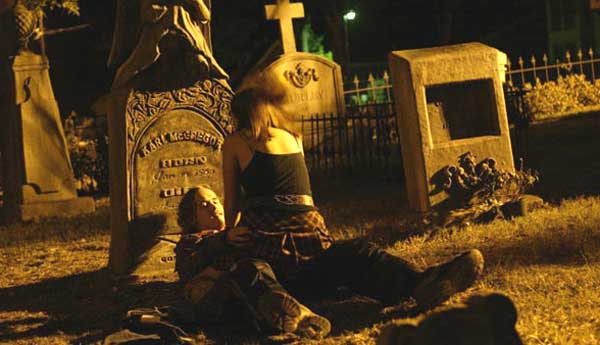 A Time to Ill.

An ingenious tripwire thriller, where a series of unrelated events all come together in the wrong place at the wrong time – 11:14 pm.

Writer-director Greg Marcks crafts 11:14 like a master weaver of spells, throwing us into compelling vignettes already in progress, in the grand tradition of Tarantino. That being said, 11:14 is reminiscent of Nolan’s MEMENTO, where we see the time stream reversed after every vignette to show us different perspectives of one crazy night in a small American town. The driving narrative gives us no pause to consider exactly how each of five tales jigsaws into its adjacent tale; we just know we’re running down an antelope with an indie tracksuit on. 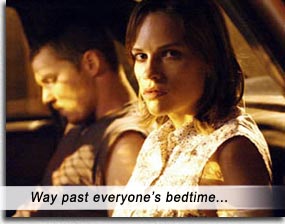 Henry Thomas drives down a deserted stretch of highway at night. As he drives under an overpass – a body falls onto his car. It is 11:14 pm. He has been drinking, he has no license and now there’s a dead body by the side of the road with him. A lady driving by thinks he has hit a deer, calls the cops “to help” and drives off. See what happens after he stuffs the body in his trunk and a cop arrives…

Colin Hanks leads a trio of hooligans (wasn’t that what young, rowdy boys were called back in the ’70s before wiggas and gangstas?), tearing up suburbia in his tiny minivan. (One of my friends owned a van exactly like this when we were – ahem – hooligans. He affectionately called it the “rice bubble.”) His van clock reads 11:09. They’re doing nothing outlandishly evil, just drinking and driving, punching each other, throwing a burning book out the window, pissing out the window and generally not paying attention to the road – until they slam into a girl.

They hit the brakes as the girl is thrown forward in a crumpled heap, dead. A young man runs to the girl’s body, tragically bends over it, then resolutely pulls out a gun and starts firing on the rice bubble as it screeches off. See what happens when the guy who was pissing out the window (Ben Foster) realizes his penis was chopped off by the rice bubble’s slamming window at the accident site… 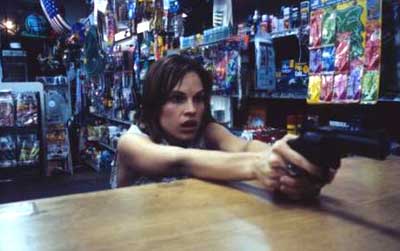 Patrick Swayze (who loves his daughter but hates her boyfriend) takes his dog out for a walk at 11:04 – and finds Boyfriend dead in a graveyard, with Daughter’s keys near the body. See what happens at 11:14 when he tries to dispose of the body to protect his daughter…

At 10:58, Shawn Hatosy petitions his mini-mart co-worker (Hilary Swank) to help him rob the joint, to pay for his girlfriend’s abortion. See what happens when Swank insists he has to shoot her to make the robbery look legit…

Rachel Leigh Cook is a teen trollop who is conning many teen beaus into thinking she is pregnant with their child and needs cash for an abortion. She has spun a web of duplicity with almost all the males in this twisted tale. See what happens when her car doesn’t start…

Take it for granted this ensemble cast create disturbing, memorable performances, the beauty of the movie is that each of the five groups keeps crossing paths in the tiniest ways that would be negligible and ineffectual were it not for the interesting way we know they are intertwined. Watch for Barbara Hershey and Jason Segel in almost unrecognizable cameos.