BACK TO THE FUTURE by way of BRAZIL. 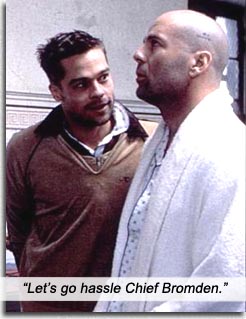 Like BACK TO THE FUTURE II with Biff in charge forever.

A subterranean Orwellian Earth culture in the year 2035 sends a prisoner back in time to observe and report on, and perhaps stop the spread of, a human-created virus that killed 90% of life on the surface.

Bruce Willis is prisoner James Cole, serving his government overlords by being sent back to 1996, the time in Earth history that the alleged “Army of the 12 Monkeys” supposedly released the virus. Cole ends up getting sent back time and again, either years too early or too late, often meeting psychologist Kathryn Railly (Madeline Stowe) and then being dragged Back To The Future, as it were, and becoming ever more dazed and hallucinatory as to what is real, what is memory, what is past, what is future, and what the hell Brad Pitt is doing.

Brad Pitt is Jeffrey, who meets Cole in an insane asylum (in an extended sequence that obviously builds on the primal fear created in ONE FLEW OVER THE CUCKOO’S NEST – that of being sane and accused of being otherwise with no way to prove it). Jeffrey may be connected with the Army of the 12 Monkeys or may just be a twitchy wacktologist. Pitt is a keg of dynamite, frenetically showcasing a mad dog performance, his pretty face a carnival monster here through his own contortions and his crazy-eye. Alongside Willis’s characteristic underplaying, Pitt is like an explosion in a German cheese factory.

David Morse is one of the ominous future scientists; Frank Gorshin (The Riddler from the 1960’s BATMAN) is a doctor in the asylum, and Christopher Plummer makes an appearance as Jeffrey’s millionaire dad.

The only performance lacking is that of Madeline Stowe as the confused psychologist, who aids Cole in his quest to reveal the 12 Monkeys insurrectionist group. With Willis and Pitt and every day player conveying the film’s sense of Damoclean doom, Stowe cannot embrace the necessary gravitas required for her integral role. She becomes more a plot device than a character – the person who fills in information for Cole when he needs to know the year or a street name. (Some A-List director or movie exec once described Madeline Stowe’s beauty: “Even if she opened her legs, you wouldn’t be able to take your eyes off her face.” Wow, what a compliment!… I think. Praising a woman’s beauty by invoking visions of her open labia. Well, if she’s proving such a lazy actor, I guess she’s still got her face and labia to fall back on.)

To outline the story’s beautiful circular construction would be to reveal too much; suffice to say that Cole remembers, as a boy, seeing a melee at an airport, a lady screaming, a man gunned down. His future will be inextricably linked with these events time and again. And the desolate soundtrack (by Paul Buckmaster) complements well the grim story of a man forever manipulated into a tragic time-loop.

12 MONKEYS is rife with interesting ideas, such as Railly’s lecture on prophets actually being time travelers; déjà vu, in which a future event is “remembered” by Railly and Cole as it happens to them; the Christ mythos, in the form of James Cole (J.C. huh?) who sacrifices his life for the salvation of humanity…

Under different circumstances, the title theme would be considered a quirky, cute accordion line, rather than evoking a disturbing monkey jumping around on your brain.