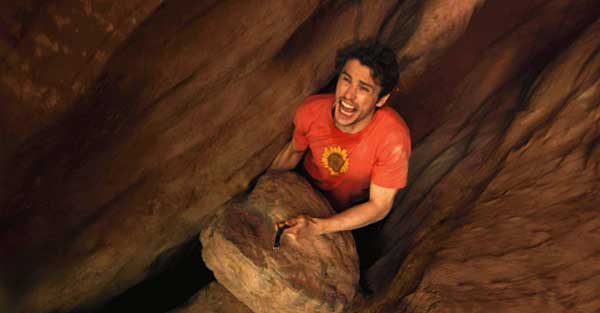 The unholy marriage of flesh and stone…

Pain – is such a rush! This – is pain! Fabulous!
— Brad from BACHELOR PARTY.

Betcha when Aron Ralston started his canyon hike that Saturday morning, he didn’t think that by 10 a.m. he’d be swimming in a subterranean cavern with two hot chicks, that by Wednesday he’d be drinking his own urine and that by Thursday he’d be carving his own arm off…

127 HOURS is the intense shock-rock account of how young adventure-seeker and canyoneer Ralston (James Franco) got his right hand and forearm trapped under a rock in Blue John Canyon near Moab, Utah in April 2003, having not told anyone where he was going, and of how he survived for five days and ultimately escaped his 800-pound stone cufflink.

127 HOURS is like a gruesome car accident – you don’t wanna look, but you can’t turn away.

When Ralston falls down a gulch and realizes his arm is trapped under a falling boulder, his dismay is soon overcome by frustration when he can’t shift the boulder or pull his arm loose. He screams, “This is insane!” as we all would, because in this modern world, things like this not only don’t happen to us, but CAN’T happen to us. Like the abandoned couple in OPEN WATER, we think we’re too technological, too evolved, too sophisticated for these menial mishaps. Ralston peers up at the sliver of blue sky above the gulch and sees a faraway plane. It’s surreal that in this world overrun by people, not one other soul knows where he is… 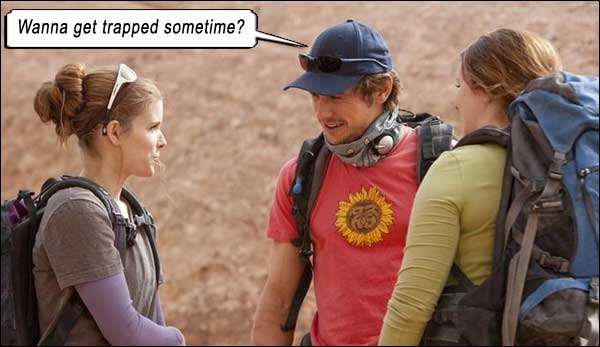 He thinks back to his last hours in civilization; how he didn’t pick up his mother’s call, how he didn’t tell his co-worker where he was going, and even how he misplaced his Swiss army knife, saddled instead with a cheap multi-tool, which would have to go above and beyond its call of duty to pull off a gory task.

In those first few hours, Ralston still believes it’s no big deal, as he bashes, he smashes, he strains against the boulder; he huffs and puffs and bleep and bloop and by ten o’clock was completely pooped.

He starts a commentary on his vidcam, one of his first ruminations that his hand has not had circulation for 24 hours, “It’s probably gone.” Horrifying thought! Even if you did escape now, that part of your body is destroyed irrevocably. Then the corollary thought: how long can the rest of your body maintain with one part of it slammed off from regular function? The blood is being squeezed through forcibly-created pathways to avoid that dead junction – how long before the machine busts a piston? On the third day, Ralston starts talking of his excessive heart palpitations.

He starts conserving his food (2 burritos) and water (1 flask); jerry-rigs an ingenious sling to try to shift the rock; chips away at the stone with the multi-tool. He dreams… of his ex-girlfriend, of parties, of being freed – and wakes to stone-cold reality (isn’t that the worst, stomach-curdling feeling in the world?); noises in the dark, delirium, wild thoughts…

Director Danny Boyle is intent on making us feel everything Ralston felt, force-feeding us his emotional arc, through periods of sanguinity and desperation, frivolity and fear, and his ultimate descent into insanity and then clarity and then a hybrid of both; after all, how insane/sensible do you have to be to realize your only option is to break both the bones in your forearm and carve it off to escape? 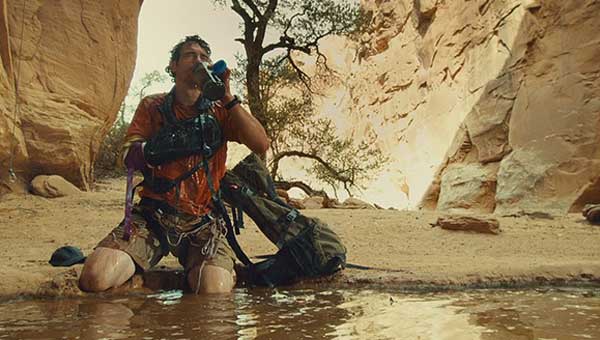 “Hmm, as stagnant, disease-ridden streams go, this one’s not bad…”

James Franco goes where few actors have been – no, not down a gulch in Utah – into the mind of a man who calmly assessed self-mutilation for survival. And went through with it! Of course, our own primal fears were awakened long before Ralston made the decision. It is WE who are trapped, it is WE who will die slowly or risk brain-searing pain, and ultimately… it is WE whose arms Ralston is cutting into! Boyle and Franco take us there, capturing not just the mental state, but (with the jolting use of fizzling audio and red meat editing) also capturing that ineffable yet jarringly familiar sensation of electric, teeth-fraying pain, as Ralston cuts through his tendons, nerves exposed. At that point, we would welcome fingernails down a blackboard.

When his arm comes away and he stumbles backwards – that blank look – it’s like his brain has fried its last cell trying to process what he has just done. What was going through Ralston’s mind at that point in real life? The brain as an organ assessing how to cope with a body part suddenly non-existent on its radar?

Ralston retained enough peace of mind to apply a tourniquet before the cutting got too deep, retained enough sanity to take one last picture of his cut-off arm; had enough strength to then rappel down a cliff face and walk in the direction of his car before coming across hikers and being rescued.

Astonishingly, Ralston retained consciousness through his rescue and hardly even had to be helped walking; a testament to the human body’s resilience, that’s how fit and/or adrenalized he was. Ralston made it because he was in peak human condition from his extreme sports escapades. It’s got nothing to do with his “soul” or fighting spirit or that stupid “premonition” of his future son.

Just the thought of the rescue chopper descending would be enough to send you into a coma – the psychological RELIEF that you don’t have to stay conscious any more, that help is here. What would it have been like inside Aron Ralston’s brain in those few hours between deciding to perform the deed and his ultimate rescue from the desert floor? Like swimming in madness.

From Ralston’s book, Between a Rock and a Hard Place, 127 HOURS is pure visceral emotion. It will leave you spent, if you haven’t fainted first. The film’s coda shows us the real Aron Ralston with wife Jessica – sitting in the sun, relaxed, quiet. A welcome relief from the foregoing intensity. Ralston continues to climb and trek; we see a prosthetic climbing apparatus attached to his missing limb.

After all that talk about the brain coping – here’s another thought: Did Ralston’s arm actually break when it got jammed in the first place? And was it just a case of cutting, rather than breaking and cutting? We only have the testimony of this one guy as to what went on during those 127 hours – could his brain have created a false perception of those mind-numbing nerve-scarring hours in order to cope? 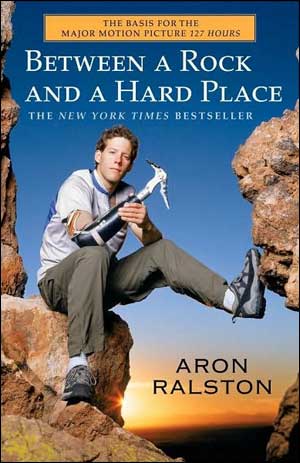