A man down on his luck accepts an invitation to make big money – and inadvertently finds himself the 13th gunman in an underground Russian Roulette game. 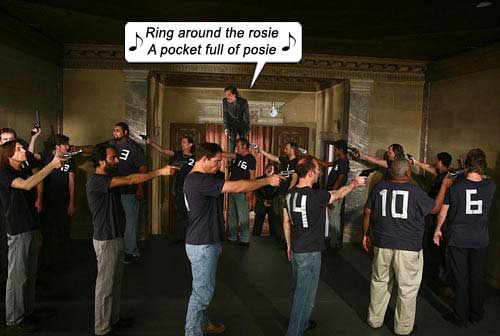 “13” sets up the clichéd premise immediately: electrician Vince Ferro (Sam Riley) needs money for his dad’s operation. While he is busy connecting wires at a client’s home, he overhears the client talking about a letter he has received that will mean the end of his money troubles. The client overdoses the next day. Vince steals the letter.

He follows the letter’s guarded instructions, picking up a key, expenses, a cellphone, traveling to New York, where he is picked up by a mysterious driver and taken to a mansion deep in the woods.

The trembling Vince realizes too late that he’s in too deep. The mansion hosts a vast game of Russian Roulette, with high-stakes bettors gambling on “their shooter” beating the odds and surviving. If their shooter falls, they turn their bets to the remaining players. Each player wears a black numbered t-shirt. Vince is number 13. “His” bettors – outraged that Vince took their player’s place – tell him simply, “It’s too late to leave. You have to play now.” Mortified with fear, Vince joins the circle of men aiming their guns at the man’s head in front of them.

Yes, Vince stands to make more money than he’d earn in ten years. If he lives.

Directed by European Géla Babluani (remaking his own 2005 European film 13 TZAMETI), 13 is like the most intense Russian Roulette moments of THE DEER HUNTER compressed into Christopher Walken pants-wetting proportions.

Though set in New York, the movie oozes Euro, in unnerving plot, gritty direction, and the wealth of European actors. Sam Riley, his lips redder than Michelle Pfeiffer’s as Catwoman, is a Brit, as are many of the supporting cast. Hard-fightin’ Brit Jason Statham is a veteran bettor, who places his own elder retarded brother in the circle, played with brawny tragedy by none other than Ray Winstone; British Hard Guy from a previous era, as older brother to the British Hard Guy of this era. This is the deepest side-story, as the elder brother laboriously spits some harsh, guilt-laden words at the younger, as the competition nears its finale; we speculate that the younger brother places the older in play as a means to abdicate his responsibility for him.

Mickey Rourke, somehow always looking like he woke up in a dumpster, is a shooter, so bloated he’s about to float away. Ben Gazzara, so old he’s about to keel over. Alexander Skarsgard (son of Stellan) so Sexiest Man Alive he’s about to get laid. 50 Cent so gangster he has the audacity to try strangling The Wrestler. Jason Statham so hard he’s about to make TRANSPORTER 4. Ray Winstone so retarded Sarah Palin called and wanted lessons. Michael Shannon so overacting he’s about to become General Zod.