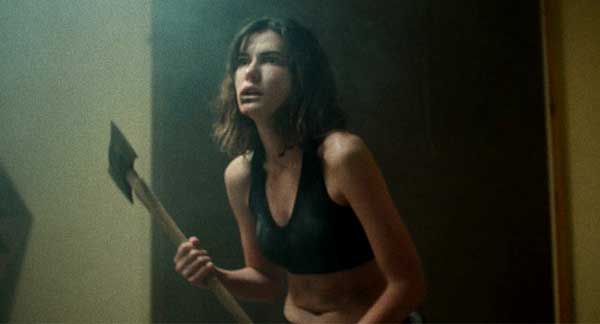 The story of the pervert landlord installing hidden cameras to spy on his tenants in 13 CAMERAS may have been disconcerting, but its sequel, 14 CAMERAS, is disturbing on a visceral level.

Gerald the Landlord (Neville Archambault, reprising his sickening, remarkable role as the loose-lipped sex pervert) has taken his voyeur pastime to the dark web. Not only has he set up surveillance cams in numerous residences, he streams the feeds to paid subscribers. Making his perversion work for him! When he opens his account and watches the online viewer count rising, while breathing heavily and seemingly manipulating himself, the horror of the dark web hits us like a black wave of nausea.

Film opens with Gerald maintaining his cameras in one of his wired homes, where he watched a couple have sex earlier. Pottering around the bathroom, he finds the woman’s toothbrush. As in the last film, he relishes putting toothbrushes in his mouth. Leaving a stench on them that defies explanation. Our insides turn over when the unsuspecting victim uses the toothbrush later, complaining that it “smells like shit!”

Gerald breaks into another woman’s apartment (Chelsea Edmundson as Sarah) to maintain his devices (and put her toothbrush in his mouth) – and she returns home. He viciously knocks her out, puts her in a residential garbage bin, and lugs the bin into his moving van. No more Dodge rape van for Gerald – this bigger vehicle carts more prey, more devices, more sex slaves than ever! (The only silver lining in her kidnapping is that she was spared the oral horror of using her toothbrush.)

Credit to Victor Zarcoff (writer-director of the last film, here just writing, and handing off directing duties to Seth Fuller and Scott Hussion) for following the threads he left dangling in 13 CAMERAS, such as the fate of Claire (Brianna Moncrief) and the son she bore at the black conclusion to that film: she is prisoner in a subterranean bunker in Gerald’s backyard, while the boy – lives with Gerald!

Gerald dumps Sarah in the bunker, and she convinces Claire (whose will has been beaten into submission) to conspire to escape. The boy, whom Gerald simply calls Junior (Gavin White), seems to be raised with no supervision, watching TV, eating, snooping, whenever we see him, while Gerald comes and goes, pursuing his nefarious perversions. The mind reels when we estimate Junior as a 10-year-old – which means Claire has been trapped in that dungeon for a decade!

The two women and Junior would prove to be spanners in the main horrific plot, which involves Gerald broadcasting one of his homes featuring two teen girls, and agitated viewers desiring more than just the visuals…

Danielle (Amber Midthunder) and her friend Molly (hard-9 Brytnee Ratledge, Parker Posey with rock abs) are the viewing subjects, lazing by the pool, while Molly’s brother Kyle (John-Paul Howard) does a little flirtation dance with Danielle.

As horrifying as the hidden cams are, when Gerald signs on (his screen-name “slumlord” – this movie’s alternate title) and registers his video feed under keywords like “showering women” and “college girls naked,” and the viewership starts chatting about the unsuspecting subjects, our horror becomes a glutting tumor in the base of our brains.

Then that tumor explodes. Danielle gets undressed and flops her panties toward the camera. And a subscriber asks: “How much for the panties?” Gerald looks stunned (or at least, more stunned than usual on his labored loose-lipped face).

That sickening feeling of our innards being hollowed out comes not from poltergeists or demons – but from the very real world we live in, populated by a species we thought was more civilized…

And Gerald gets the panties. To mail to the subscriber. Not before sniffing them euphorically, and packing them in regret, like proudly and sadly seeing one of his kids off to kindergarten.

Then the inevitable question: “How much for the girl?” This seems to cross a line for Gerald, as he tersely types, “Not for sale.” The offer comes: “I’ll give you 100K.” Gerald desperately tries to block the account, but the conversation continues onscreen: “I’ll give anyone 10K for the address.” Someone else answers: “I heard the girls say Santa Fe.” Before Gerald can delete all the subscribers, someone else: “100K? I’ll get you the girl. And put a bow on her.” Gerald blocks, blocks, deletes, deletes, fingers flying over keys where once they flew over flesh – suddenly – a picture of his wired house where the girls are!

14 CAMERAS becomes a scathing commentary on how low-bar, how feral, how sociopathic, how fatal the dark web in America is. This is the true terror bubbling under the surface of the plotline. Whole communities of deviants engaging in actions that should never be elevated from dark thoughts; humanity at its most id, seeking out online brethren to bolster those hoary perversions that once had nowhere to flower and thrive.

In the most comedic black turn of the movie, Gerald rushes out to his wired property – to be the guardian angel!

Meanwhile, Junior, curious beyond his upbringing, has broken into Gerald’s monitor room, and sits quietly watching the numerous screens, of unsuspecting women having showers…

Before you get too cozy with Gerald becoming an anti-hero, consider his twisted ethics: he is not saving the women from an assailant for the sake of justice, but because the assailant is stealing “his” property. He’s worked diligently for years to put this whole network together, to spy on people, entrap them or kill them. And he’s not going to let some upstart perve unbalance his sex-murder-wank ecosystem.

As an example of how extensive Gerald’s network, at one point, all his monitor screens go down, showing “No Signal.” Desperation. At what point in the wiring pathway is the system down? He may be insane, but his insanity is rooted in the real world of wires and satellites and hardware. And it is so complex that he would realistically need a technician to run it while he sticks to the perving and kidnapping and killing, leaving the computer work to his IT guy.

Junior is the wild card in the movie. But he shouldn’t be. He was raised by a sociopath, nurtured into a way of life that would leave him incurious about his “father’s” comings and goings. We can presume he has never been schooled, never been taught anything except basic survival skills – how to eat, shit and communicate – and we can presume he has never been educated about the world at large, all his information gleaned from the Constant TV. Thus, how does he discern his father’s video screens as criminal enough to call 9-1-1? And on a diet of moronic American TV, wouldn’t his father’s vocation simply register with him as just another reality show? Also – how does he know what 9-1-1 is? Did Gerald actually instruct Junior on how to call the authorities – those people to whom he must remain invisible to conduct his hobbies?

In a poetic flourish, it is Junior who opens the bunker manhole to free Claire; he does not know who she is, but it takes her only a moment to realize Junior is her son, ripped from her at birth.

14 CAMERAS, like its predecessor, ramps toward a violent conclusion, and a blackly comedic ending. But this time, it leaves a sickening mustard-gas aftertaste in our mouths.

I write this in 2019, and the depiction of dark web deviants in this 2018 movie presciently foreshadows the many mass-shooter white supremacist terrorists who have become active in real American society (and who, thankfully, are not being immortalized by the mainstream news programs anymore, avoiding stating names or showing faces). All of the shooters were either influenced by, or participants in, the dark web. And here’s the true horror: the white supremacist imbecile who sits in the white house, Dumbo Donald, echoes the xenophobia of the dark web lunatics as if he is one of them, in a hate-filled, emboldening feedback loop that is only growing wider and louder.

And it’s not just the dark web – Russia actually invaded America in 2016 (in the truest sense, in that they forced their will upon the populace of another country) and emplaced a puppet as leader of the country, displacing the course of history and annihilating democracy, all through the apple-pie prescribed worldwide web. And the xenophobes in their dark webholes continue to be gaslighted by that traitorous puppet, with his talking point that the real “invasion” is at the southern physical border, featuring brown people who will take your job of picking strawberries.

14 CAMERAS reveals the merest glimpse of America’s underbelly, and while we gasp in horror at the bestial deviancy of those small-timers, the true monsters are out in the open now, sheltering under Dumbo Donald’s overbelly.