Step into my parlor… 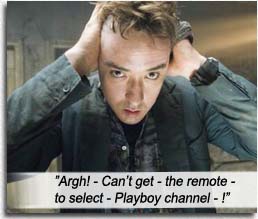 It was a dark and stormy night. A car misses a turnoff, the driver reverses to see the hotel sign; turning down the side-street, he soon parks, runs across a picturesque bridge to a rustic hotel, sheltering himself from the tempest. All staples of a classic horror story – until the driver enters the hotel, into the first twist on the classicism: Mr. and Mrs. Innkeeper fall over themselves trying to convince him their premier room IS haunted (with brochures and tall tales), while the driver impatiently just tries to get the key from them, to get out of his wet clothes.

But this is no average guest who will be jellified by something spooky. The driver is Mike Enslin (Cusack), a paranormal debunker, whose journalistic vocation is to seek out haunted locales and rate them; settling into the room, rapping on the walls, passing sensors over objects, nonchalantly sticking his head up the fireplace, in search of… True Terror. Next day driving home, he assesses the hotel’s creepiness factor into his dictaphone, giving it “five skulls” (out of ten).

He is not easily impressed.

So when he is warned against staying in The Dolphin Hotel’s room 1408 (1+4+8 =13, wink), he takes the challenge, only to find actual pants-browning horror awaits.

The movie “1408” is arguably one of the better filmic adaptations of a Stephen King tale, somewhere between the silly THE HAUNTING (with Liam Neeson, 1999) and the truly scary THE CHANGELING (with George C. Scott, 1980). Rooted in a regular world (APT PUPIL, SHAWSHANK REDEMPTION), yet flickering between reality and what could be an internalized dimension (THE SHINING, SECRET WINDOW), 1408 is well-directed (by Mikael Håfström, DERAILED, 2005), though loses something in the screenplay by Matt Greenberg, Scott Alexander and Larry Karaszewksi. We are thrown so headlong into the setup – of getting the skeptical, arrogant reporter into the haunted room – that Enslin arrives at Being Scared too quickly.

Whereas other hoteliers insist on Enslin’s overnight stay (increasing patronage in their “haunted” rooms by 50%), the manager of The Dolphin, Gerald Olin (Samuel L. Jackson, who seems to forget he is allowed to stop being Jules after PULP FICTION), insists otherwise, offering as evidence a thick folder of documented deaths in Room 1408. “It’s an evil fucking room,” he tells John Travolta – I mean, John Cusack.

Enslin, a confident, cynical atheist, mocks Olin’s caveats: “You know why I can stay in your spooky old room? Because I know that ghoulies and ghosties and long-legged beasties don’t exist – and if they did, there’d be no god to protect us from them, is there?” Absolutely true, which is the underlying paradox in all haunted media – Christians who believe in the paranormal cancel out belief in their god (but don’t tell THEM – after all the brain cells they kill to believe the unbelievable, there aren’t any left over to apprehend the reasoning behind “unbelievable”).

Riddled with cheap “gotcha” moments, it is gradually revealed how Enslin’s marriage disintegrated shortly after his daughter’s untimely death (cancer, I think). The movie bravely defends its atheist stance, at one point (during flashback) Enslin ranting to his wife (Mary McCormack) that they should have helped their daughter fight, rather than fill her head with stupidities of “heaven” and “nirvana.” (If you believe you will meet your friends and see God in imaginary after-life, you won’t battle to hold onto REAL life.)

Like Enslin, I’m not easily impressed. And an atheist. So I’ve got to see compelling evidence for Enslin getting so scared so quickly. Mints on pillow, clock radio turning on by itself (playing The Carpenters’ We’ve Only Just Begun), window slamming on hand, hot water spewing from faucets – these are easily-explained physical phenomena, yet it takes Enslin ages to propose, “someone must be in the room.” As a writer and skeptic, that should have been his first reaction without any supernatural leanings; he should expect these tricks, through his experience with determined haunted hoteliers. And with Olin’s forewarnings, he should have gone into this room swinging with the wall-rapping and electronic-sensor routine. Instead, his first reaction is crapping his panties. As if ghosts do exist. That’s my only grumble with 1408. Otherwise, it rolls smoothly on its fears and gears.

Well, kinda. After some mind-twisting haunting comes down the para-dimensional pike, it still takes Enslin ages to use his WIRELESS COMPUTER CONNECTION and/or CELL PHONE. This ain’t 1954 – it’s modern times, so what would be the first thing you’d do if your doorknob fell off, your key broke so you couldn’t exit, and the hotel landline was connected to some eternally-jovial operator on another dimension?

Like any good haunted room encouraging evil, Room 1408 channels Enslin’s inner dread – his dead daughter comes beseeching him, in the most disturbing scene of the movie; not because she turns into some flesh-thirsting monster, but because she quietly re-dies in his arms. Just goes limp. And Cusack does a mighty job of conveying a parent’s soul-tearing grief. Think back on your own life; if your multitudinous regrets were paraded before you as if real, how far into insane would you trip? Truly, our own pasts are more psychologically damaging than any nameless specters leaping to their deaths or lying bloodied on the bed. And after Enslin’s daughter distressingly crumbles to ash, is it really worth throwing in the cliché of walls bleeding? (Oh no, you di’int!)

It’s the classic staging of Man Trapped In Room (and for a guy being harassed by forces unknown, he sure sticks his upper body out the high window a lot) and what we think is the pat resolution is misdirection. It’s beautifully done, making us breathe easier; yet knowing deep down that it can’t possibly be real. A double-double-cross coming up. And the clock radio hints as subtle as a hammer as it keeps sizzling into life with We’ve Only Just Begun…

Only the twisted mind of Stephen King could come up with a twist so devious. But the Room is in for a shock – when Enslin makes peace with himself over his daughter’s death and wife’s separation; when he finds he has nothing left to live for, the Room has no more hold on him.

And he checks out grandly, giving 1408 Ten Skulls.

Was it a triple-cross? He pulls his damaged dictaphone from a box, presses Play, and what he hears is… well, let’s just say, “You can check out any time you’d like but – you can never leave…” 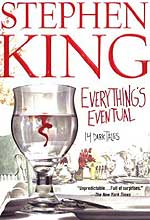