With Intent to Act…

Rather than Just Another Tough Guy Infurio role, in 16 BLOCKS, Willis has put some nuanced daylight between himself and The John McClane. His detective Jack Mosley is haggard, worn-out, somber, morose, sporting a paunch (which looks suspiciously like a pillow), washing down meds with cheap whiskey, and so out-of-shape he loses breath climbing stairs. It is almost hilarious to see Willis play so debilitated. 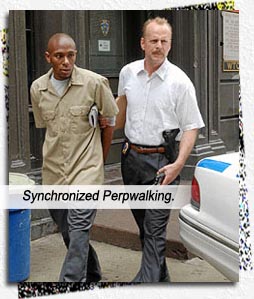 Yet the John McClane id still ebbs in this character’s veins – when faced with Saving The Day, he will. But not willingly. Roger Ebert describes The John McClane best: “It’s going to be a pain in the ass for me to do this, but I couldn’t live with myself if I didn’t.”

What he has to “do” in this Richard Donner-directed actioner is transport a witness, Eddie Bunker (Mos Def), sixteen blocks in two hours, to a courthouse to testify. What starts as a seemingly mindless, shitkicking assignment turns into a gauntlet run, as everyone who doesn’t want Eddie to testify comes at Eddie and Mosley hell-tilt with murderous intent.

For that dramatic knife in the guts, the people who don’t want Eddie to testify are – THE COPS. Twisting the knife: they’re led by Mosley’s ex-partner, Detective Nugent (David Morse).

The first plagiarized movie plot that comes to mind is Clint Eastwood’s THE GAUNTLET (1977), and I’m sure there are a thousand other movies in this “running the gauntlet” genre, yet this movie’s 105 well-paced minutes, written by Richard Wenk, rush by on the strength of the performances.

Willis has always had the acting chops – in this movie and in HOSTAGE (2005), he actually throws them down; and we all know how sturdy David Morse is (DANCER IN THE DARK, THE GREEN MILE). At one point, Nugent’s conflicting emotions are incredible to behold, when he confronts his ex-partner, Mosley, but cannot shoot him, then gives the order for someone else to do so – but the acting revelation here is most definitely Mos Def.

Never let it be said this guy is “just a rapper” – his attention to the Eddie character is indicative of his talent as a full-blooded, mustered ARTIST – from his adenoidal motormouth, to his browbeaten stoop, to carrying around a scrapbook with scrawled birthday cake recipes because he wants to “go straight” and become a baker – Mos Def is a sensation!

His best line can also be applied to what he and Willis wrought on their characters throughout this entertaining ride: When Nugent thinks he has the drop on Mosley, “You can’t get lucky all the time!” Eddie then ambushes Nugent, “You can be smart every day, though!”