Teens and geeks and MILFs. Oh my! 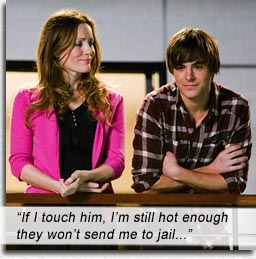 And why does he have to be so dreamy?

17 AGAIN is the old story of an adult – Mike O’Donnell (smooshy-faced, doughy Matthew Perry, himself a tween idol back when dinosaurs ruled the Earth) – becoming his teenage self (blue-eyed, aquiline-nosed, taut-buttocked Efron) with all his manly world knowledge intact. Mike is an estranged father of two on the edge of a divorce; so the movie’s subtext takes us on a stupid journey of self-realization which basically says that the only way you will understand your teenage children is to enroll in their school as your teen self and befriend them. (Which means, parents, that you will NEVER understand your teenage children.) And the only way you will realize your wife is hot after twenty years of marriage is to see her as a cougar while being a hot teen. (Which means, Married People, you’re pretty much screwed…)

So Mike pretends to be the bastard son of his best friend, Ned (Thomas Lennon, RENO 911), a STAR WARS/fantasy geek, and the only person he trusts with the truth of his plight. Ned’s infatuation with the school principal (Melora Hardin, elfin babe) is only matched by MY infatuation with Melora Hardin.

So Mike infiltrates his family to set them on a path of goodness and pleasure; I would think the first thing you’d do if you suddenly found yourself a teenager again is visit a medical facility to examine your hormones or DNA or something other than enroll in school to surreptitiously aid your kids, and help your ex-wife with her gardening to win her back. I told you – stupid.

Yet amongst the stupidity, Zac Efron is an acting revelation! Though he is 22 playing 17, we never once doubt he is a 40-year-old in a teen’s body; his every move is informed with the fact he is a young Matthew Perry. His conviction is seamless, his maturity as a character displaying his maturity as an actor. Yes, there are the nonsensical mystic rationalizations that jog the asinine plot, but once we accept these, Efron’s talent screams larger than life and twice as good-looking.

The levity is splashed with simple profundity a 17-year-old could never apprehend: Teen Mike on the basketball court, reveling in his vigor, “We are so fit! Y’know, in ten years you’re gonna have a thing around here that no amount of crunches will ever get rid of!”

While his anorexic cougar wife Scarlett (Leslie Mann) finds herself inexplicably sexually attracted to young Mike, yet cautiously keeping her distance, his teen daughter almost rapes him – now that’s getting a little weird. Even at this delicate moment, when we could “fall out” of the film and simply see it as a teen aggressively seducing another, Efron never loses character and keeps it light rather than sicko.

Double standards kick in when Teen Mike frowns on his daughter (Michelle Trachtenberg, HARRIET THE SPY) dating guys, and then encourages his son (Sterling Knight) to hound-dog chicks. What does he think his son is going to do with them – talk about feelings? Aren’t those other chicks someone else’s daughters?

In his actual youth, when Mike was young-dumb-and-fulla-cum, he threw away a basketball scholarship by leaving the court mid-game while a scout watched, to run after Teen Scarlett and prove his devotion. Mike spends the whole movie regretting he could’ve “made more of himself” – which implies he probably shouldn’t’ve done that.

And after all the bitching about his one big regret in life (which we presume was signing up for HIGH SCHOOL MUSICAL, but apparently it’s that basketball moment) – he does it again: runs after Cougar Scarlett and blows another scholarship while a scout watches! And he blows it even further when for no reason he turns into Matthew Perry again!

I like Efron even more when I read his personal quotes at imdb: “If I ever have to hear the HIGH SCHOOL MUSICAL songs anymore, I would jump off something really tall.” And he’s a fan of FLIGHT OF THE CONCHORDS. Say no more, True Friend.

If he can hold this dog of a movie together so cohesively, if this is the level of this boy’s talent at this ripe age, we should watch this young star on the rise very closely.

And not just because he’s so dreamy.