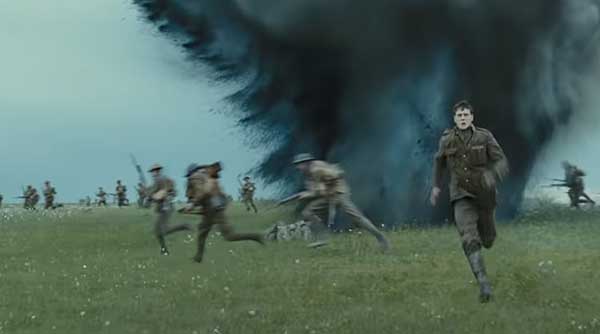 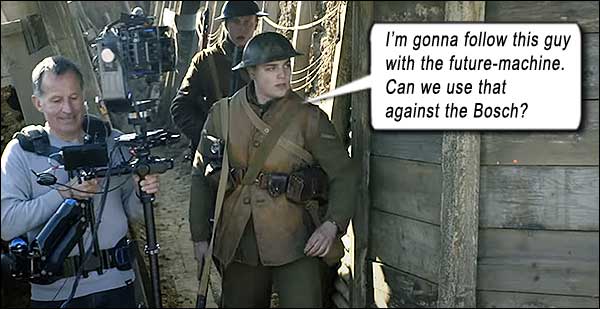 War! Huah! Good God y’all! What is it good for?! Absolutely Oscar!

World War I (a rare topic, as most modern war movies cover WWII onwards). Two young British soldiers are empowered to cross enemy German territory to deliver a message that will save 1,600 British soldiers from walking into an ambush. Without the help of Wonder Woman.

Lance Corporal Blake (Dean-Charles Chapman, GAME OF THRONES) and Lance Corporal Schofield (George MacKay, CAPTAIN FANTASTIC) are the two men, nay boys, chosen by the General (Colin Firth) because Blake’s older brother is in the battalion that needs the warning. Schofield is along because he happened to be napping near Blake when they came for him. (Closet homosexual Mike Pence warns: “See? Don’t get pulled into war by sleeping with other men.”)

Directed by Sam Mendes (SPECTRE), 1917 is made to look like it was filmed in one take. A roving camera follows the boys from their nap in the field, to the end of their journey, without once leaving their side. Of course it’s not “one take” but due to the meticulous creative magic of Mendes and cinematographer Roger Deakins (THE BIG LEBOWSKI, JARHEAD, BLADE RUNNER 2049), it damn well looks it. You can be a killjoy and find the cuts amongst the long, long takes (what the filmmakers call “blend points”), but Deaky isn’t gonna be giving back his Oscar any time soon.

Movie opens on a field of yellow flowers, (not unlike the last scene of the BLACKADDER saga where the WWI trench massacre cross-faded into just such a field, growing where the dead lay), then pulls back to reveal two sleeping soldiers, Blake (Seth McFarlane Short?) and Schofield (Anders from WORKAHOLICS?); awakened and summoned by the General, the camera pulling back and leading as they walk-and-talk, never leaving them, in medium shot, no cutaways, no inserts, as the mise en scène opens up behind them: a tableau of soldiers in the grassy expanse, resting, washing clothes, cooking, milling aimlessly, camera still pulling backwards as they enter a shallow trench, whose sides gradually grow to over 10 feet high, as they ponder the nature of their summons, soldiers passing them; we see “street signs” to differentiate the endless canyons of mud-walled, boarded trench, wires snaking along the walls, sandbags, rifles, blankets, helmets, poles, rags, muck… we did not even realize the imperceptible morph from flowers in fields to wet mud and dried blood. This opening shot alone is over 9 minutes long, one take, and “ends” with Blake and Schofield entering the General’s dugout…

But it doesn’t end. Camera has followed them into the dark and is now continuing filming what would ordinarily be, in any other movie, another scene. Then it follows them out again… (Mention must go to the somberness of Firth’s General. Star power like Mark Strong and Benedict Cumberbatch will also make grim cameos, but are definitely not the pillars that this movie need rest on. The main event is stolen outright by George MacKay as Schofield)… No Man’s Land depicted in garish hellishness, the horizon-stretching mud, blasted earth, bloated horse carcasses, gunmetal sky, barbed wire, which Schofield would cut himself on… (the horrific realism of that tiny cut; it’s small, but it’s there, bothering him every time he puts that hand out to grasp something)… Blake and Schofield ultimately making – the German trenches!… Into the German tunnels… deserted bunks and hefty rats, pitch-black – tripwire – booby-trap…

This one-take approach is not as stultifying as we might imagine, as the camera is free to roam far from our protagonists; we see them in long shot if they skirt a muddy, body-filled trench, or wander across a blasted hillock; the name of the game is to just have eyes on at least Blake or Schofield or both at all times. The filmmakers created trusses and ziplines and truck-mounts to extend the camera’s freedom of movement, but for us viewers the single shot creates a sense of claustrophobic dread, as if we have no peripheral vision, as if there is something fatal just around the next broken outpost. And then, in the most benign, unimaginable manner, that fatality comes from open skies…

1917 does not romanticize war: rats eating flesh, body parts rotting, even Blake’s and Schofield’s slow, crouching advance across deserted throughways reveals so much abomination caused by warring humans; the worst abomination of all – the paranoia and distrust of human toward human. Every time they encounter an enemy soldier, we feel that since they are only two lone soldiers, maybe there is some spark of humanity that will allow both parties to pass each other unmolested, if neither initiates attack – but no. Every enemy soldier is just that – an enemy, hellbent on killing Brits by any means possible.

Title card tells us it’s April 6th, 1917. It is never brought up in the movie, and it would only matter to history buffs – it’s the date America “officially” entered World War I. Funny they should be so specific, because this tale is not based on any specific event or person(s), rather a composite of war tales Lance Corporal Alfred H. Mendez told his grandson Sam, who would grow up to be this movie’s co-writer/director. There is no scope of the grander picture of the war, or the politics behind the Austria-Hungary conflict with Serbia that brought in Germany and Russia – nothing except that one message that needs to get through. 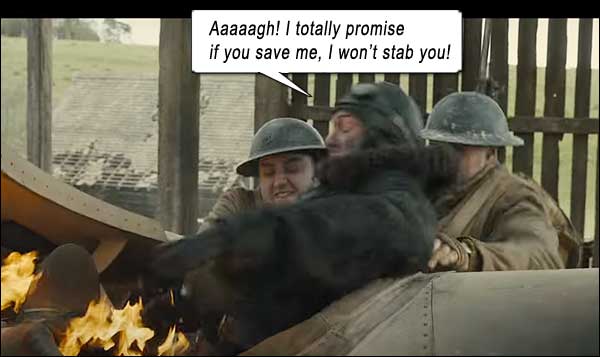 Surely the most amazing aspect of this production is a basic film-school principle that is completely ignored here, that is, that every camera move must have a start point and an end point. Yet from the moment he turns it on, Mendes’s camera has no end point! It’s in a constant dance to the very end of the film! Another incredible production aspect: when our boys walk for long distances through trenches, we never see a repeated stretch of trench – those trenches have actually been dug into the English countryside (Bovingdon Airfield), over 5,200 feet of them, for maximum walk-and-talk amaze-balls. Steven Spielberg changed the game when he authentically recreated the Normandy invasion exactly how we imagined it to be; now Mendes changes the game in the most authentic trench warfare recreation ever committed to film; even more brutal than we imagined it to be.

The realism is not just reflected in the muck and murder (biplanes dogfighting in the distance, a plane crashing in our vicinity, a knife-stab, buildings burning and flares winding down through the shifting shadows), there are innocuous details, like an Indian Sikh soldier nonchalantly amongst the whiteboys in the back of a troop transport. Representation for what was a large percentage of other-ethnicity troops amongst the British soldiery (just like America’s ranks in wars were swelled by African-Americans, Latinos, Polish, Asians, you-name-the-Others). Guess we can now call 1917 a “revisionist” war movie – for that crazy reason that it’s actually portraying reality rather than the whitewashed version we’ve been milk-fed the last 100 years.

The movie utilizes ambient daylight to light its mostly-outdoor shots (so the crew were always waiting around for the clouds to cover the sky – not too long a wait in England), with the burning building sequence lighting itself with the actual flames – cinematically masterful, the raging immolation of the village creating literal roaring beauty.

Schofield finds a short respite in this village; an interlude in an abandoned cellar, with a fearful French woman and a child that is not hers. Our rom-com hearts come out to flutter, as we wish with all our might that Schofield would just stop here, with this beautiful dirty blond imploring him to stay, giving her solace and help and, of course, man-love. But there is that damned message, and the only human gesture Schofield can afford is to bequeath her the milk he collected earlier from a cow. To truly prove his worth as a man, we know he needs to desert her.

There could have been just the message, but that added impetus of Blake’s brother would tug at the heartstrings in the film’s final emotional scenes.

And he shall run. He shall run like the hounds of hell are on his heels and all life hangs in the balance. Because at the end of that run… unlimited chicks.

1917’s forward momentum would come to a kinetic climax in Schofield’s end-run. All stealth thrown to the winds, with life and death on the line, and minutes to spare – Schofield runs. Like Jefferson’s chest-beating end-run in THE DIRTY DOZEN, like Mel’s inspirational final sprint in GALLIPOLI, Schofield gives it more than his human frame can bear, plowing across the line of rabid soldiers going over-the-top, as shells rend the earth around him, knocked down, recover, knocked down again, recover, run, RUN, the lives of thousands balanced on his stamina alone!…

… Like an exhausted bookend, Schofield closes his eyes, and Mendes’s camera finds its end-point… on a field of flowers.

Not everyone could be saved – but the message got through. We hear that message, time and again, over the last century, but no one’s paying attention:

War! Huah! Good God y’all! What is it good for?! Absolutely nothin’!

But don’t worry, as long as it’s good for a few Oscars, I’m sure it’ll keep happening.