When you’re this much a street brah, sleeves are optional.

THE FAST AND THE FURIOUS was so successful that Universal Pictures had to have a sequel, so they did the smart thing and threw out all the characters from the first movie and only kept the prettiest girl for the sequel, Paul Walker. (Actually, all the characters were asked to return, but Vin Diesel turned down “the shitty script” in favor of RIDDICK, which negated the reason for most of the other hangers-on being there.)

In 2 FAST 2 FURIOUS, Walker is ex-cop Brandy O’Conner—I mean, Brian O’Conner (sorry, it’s his eyes, I think, or maybe the frosted hair), who has relocated from LA to Miami and is now just some kind of itinerant. Ludacris appears, with an afro the size of the ‘70s, and calls Brandy for an illegal street race that’s going down. Just Because. Brandy, who seemingly has nothing better to do, wins the race, by switching through all his 38 gears, then gets busted by the cops, and is forced to go undercover to bust a kingpin smuggler.

The characters all talk in a too-kewl-for-skool street vernacular that jangles the nerves, so I might be a bit hazy on the plot, which involves cars the color of irradiated cotton candy and women in various states of undress.

The villain is Patrick Wilson lookalike Cole Hauser, named Verone so that it lends a Euro air to the Miami vice. His girlfriend is undercover agent, Eva Mendes’s Breasts. The two agents who recruit Brandy are Agent James Remar and Agent Bikini– oh, wait, that’s Agent Bilkins – what do you expect me to have on the brain with so many chicks in mini-skirts shaking their hips sensually for no reason? 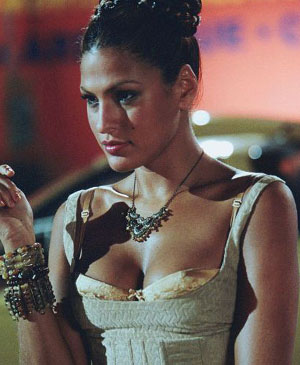 Ladies and gentlemen, to balance the testosterone – Eva Mendes’s Breasts.

Brandy recruits Roman (Tyrese Gibson) as her driving partner, because the filmmakers needed to replace the dark meat of Diesel with some darker meat. At first they fight, because apparently Brandy put Roman away, but we know they’re deep brahs from way back, on accounta Paul Walker reading some dialogue with no emotion, that goes, “’Member when we were young, and we kept getting busted?” Okay, good rehearsal boys, let’s go for a take– oh, that was a take?… When Paul Walker’s onscreen, it always looks like they’re filming the rehearsals…

Verone recruits drivers for his drug-smuggling operation (although in the whole movie we never see any drugs) by making them compete in a street race where they must reach an impounded car and retrieve a McGuffin. This Brandy and Roman do, in cars the color of a Disney princess’s wet dream, switching through all 38 of their gears again, that allows them to attain speeds faster than the director can make sense of the visuals, so throws a whole bunch of 1-second edits together and then goes for a footrub.

Verone tortures a fat cop with a rat, Eva Mendes’s Breasts turn up on Brandy’s boat to warn him Verone is going to kill him (–wait, Brandy has a BOAT? And Eva Mendes’s Breasts had to be dressed like a slut to come tell him this?), and Verone’s two henchies get their bit parts extended when they are told to go on the mule job as ride-alongs.

With John Singleton (SHAFT) directing like Michael Bay, the final scenes involve hundreds of cars provided by Ludacris’s Afro, all the color of a baboon’s vagina in estrus, to confuse the cops.

I had a gay comment for this picture, but I forgot what it was.

Then the feature stunt, as Brandy jumps a car from a road onto Verone’s yacht. That’s the big ending, although in future entries in this FAST AND FURIOUS franchise, a jump like this would be only the beginning of a much longer and stupider action sequence. For now, the dust settles, Agent Remar and Bikini cuff everyone, Eva Mendes’s Breasts walk in one direction, Brandy and Roman walk in the other, hand in each other’s pants, as we see they have kept some of Verone’s drug money, with plans to open a garage. It’s so touching, I didn’t even notice how many gearheads around me had cum into their oily rags…

Thus the FAST AND FURIOUS franchise sets itself up for a third movie, TOKYO DRIFT, where they do the smart thing and throw out all the characters from THIS movie…