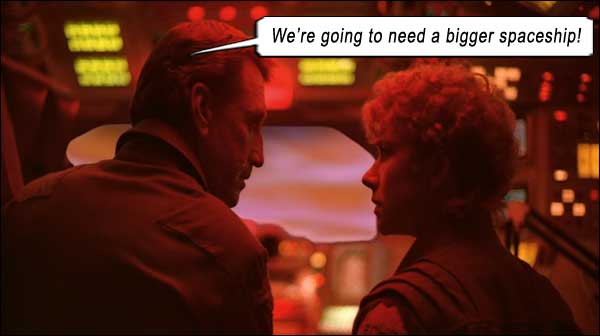 A Midget in the Footsteps of Giants.

No one said it would be easy. Following in the mythic footsteps of Stanley Kubrick and equally legendary Arthur C. Clarke. Maybe it was this inimitable pedigree that gave lowly Peter Hyams the impetus to craft such a reasonably watchable sequel to 2001: A SPACE ODYSSEY. A tension-filled space trek where we laugh at John Lithgow, gasp at the skyscape and weep for a computer, 2010: ODYSSEY TWO is a one-step-forward, one-step-sideways kind of movie.

To state the obvious, the story picks up 9 years after Kubrick and Clarke’s pioneering and inimitable 2001: A SPACE ODYSSEY. A joint Soviet-American mission, headed by American scientist Heywood Floyd (now Roy Scheider, was William Sylvester in 2001) and Soviet Commander Kirbuk (Helen Mirren), is sent to Jupiter to retrieve the abandoned hulk, USS Discovery (found silently spinning in orbit about Io, one of Jupiter’s moons), to gather data on the “failure” of the HAL 9000 computer and to maybe make sense of Dave Bowman’s last intriguing transmission regarding the Monolith, “My God! It’s full of stars!”

As economically unsound as this venture may seem, plausible reasons are given for the mission, but – like they say – you’d have to be a rocket scientist…

Amid growing political tensions on Earth, the Soviet ship Leonov arrives at Jupiter with its Russian and American crew, Hyams performing a controlled set of vignettes to bring about tension between the crews (initially distrustful of each other), then building the tension around the giant Monolith orbiting Jupiter, which unites the crews for their lives’ sake.

Though it retains none of the breathtaking poetry and grandiose vision of 2001, Hyams’s lesser vision is aided by spectacular views of Jupiter and Io, thanks to Voyager 1‘s groundbreaking flybys of the planet in 1979. Mattes of these images are put to excellent use during a suspenseful spacewalk by astronauts Max and Curnow (Elya Baskin and John Lithgow), as they approach the dead Discovery.

“No, come around this way– no, stop pulling on your end– wait wait wait I got it, no, just float don’t try to swim– now you’re getting it tangled– wait, lemme pull this part around, no, just hold your end, don’t tug on it…”

Though science is bowed to more often than in his previous efforts, Hyams doesn’t quite shake off his trademarks of outrageous conceptual anomalies and immutable physics laws treated like arbitrary physics suggestions. (With the Earth and its Moon in the same screen shot, Hyams makes the same sophomoric mistake that most non-credible space movies make when depicting these two celestial bodies which are on average 240,000 miles apart – if they were as close as depicted onscreen, not only would tides be generating tsumanis daily, both celestial bodies would have torn themselves apart eons ago or smashed together due to gravitational attraction.)

After the Monolith mysteriously goes about its business of doing nothing on a monolithic scale, puny humans pondering its purpose, and after HAL is revived and jovially goes about his business of being unnervingly menacing, Dave Bowman (model mannequin Keir Dullea) appears to Floyd, in the form of a constantly-morphing old man/astronaut/elder, and tells him “something wonderful” is going to happen.

Only Arthur C. Clarke would have the temerity to blow up Jupiter. Crumbling under the confluence of millions of Mini-Monoliths, Jupiter goes nova and becomes a sun, whilst the Leonov makes a narrow escape. HAL, through the intercession of Dr. Chandra (an ascetic Bob Balaban, perfectly congruent with his typecasting from CLOSE ENCOUNTERS and ALTERED STATES, who is somehow able to bring that same character to his future comedic roles with Christopher Guest), becomes sympathetic enough to weep for, when he is destroyed along with Discovery.

The last scenes of Earth and its twin suns illustrate Hyams’s kindergarten comprehension of planetary orbits: we are shown a constant two-sun sky everywhere on the Earth, yet in becoming our newest star, Jupiter (which is renamed Lucifer) has not changed its orbit, nor will it ever. Its orbit will appear exactly as it did when Jupiter was merely a planet – that is, it will continually “cross the sky” at a different rate than the actual Sun, thereby causing two suns to be in the sky at ever-changing positions, or sometimes merely one Sun in the sky, sometimes only Lucifer, sometimes no suns. After this silly sequence, we are immediately jumpcut across the solar system – in an uncharacteristic grandiose sequence – to Europa, the moon of Jupiter that the Monolith forbad any landings on, in its final message to Earth:

“All these worlds are yours, except Europa. Attempt no landing there. Use them together. Use them in peace.”

And lo, the last frame sets up sequelae ad infinitum, as The Monolith makes a cameo on Europa, and the harbinger-like strains of Strauss’s Also Sprach Zarathustra crouches and then leaps at us – banging its head on Hyams’s lowered ceiling.

After all, for midgets, the ceiling can afford to be that low.