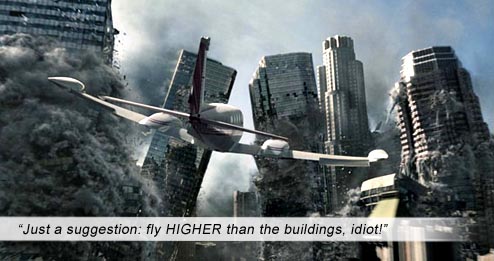 As disaster movies go, 2012 is definitely the big one. I mean, how do you outrun the world?

An inordinately large neutrino burst from the sun causes the Earth to break, and creates much employment for special effects companies. Also, the planets in our solar system have aligned (which doesn’t really mean anything, considering the gravitational force they would exert is microscopic) and narcissistic humans who still can’t shake the fact that the universe does not revolve around them, seem to think it affects tectonic activity on little old Earth. Also – Mayan Prophecy. At last, something REALLY scientific that proves all this is true!

The Mayans predicted that in 2012, Digital Domain would have the computer graphic technology to wipe out the Himalayas and New York with tsunamis. This they do, as well as other cool shit like showing skyscrapers collapsing and people hanging onto the edges of floors that no longer have walls; blowing up Yellowstone park with fireballs, sinkholes and lava; collapsing Los Angeles into the Pacific, and raining down the John F. Kennedy aircraft carrier on top of the White House and the noble president, who is tending injured people on the White House lawn by asking them if they’d vote for a public option.In 2012, writer-director Roland Emmerich has balanced his admittedly masterful use of CGI with his usually prosaic handling of human stereotypes. All the stereotypes are still here – the Everyman (John Cusack), the young scientist with all the answers and the body to go with them (Chiwetel Ejiofor), the noble President (Danny Glover – being black is now less of a fantasy than the nobility he displays in staying behind, which is absolute fantasy), the wacky prophet (Woody Harrelson), the ambitious politician (Oliver Platt), the brainless automaton military – but they either feel more organic to the plot, or the trillion dollar promotional campaign which could have gone towards bailing out another crybaby corporation on Wall Street affected my Discernment Gland.

John Cusack uses his knowledge that he is the Leading Man to narrowly escape Earth-splitting cracks and falling objects, while wife Amanda Peet does her job of looking hot and screaming a lot; while her New Boyfriend (Thomas McCarthy, who can’t stop looking like Patrick Wilson from WATCHMEN) pilots all of them unselfishly away from danger, when he should be familiar with enough disaster movies to realize he has to fall down a crevasse or something soon because his salary is nowhere near the Leading Man’s.

Meanwhile, unbeknownst to Emmerich, Chiwetel Ejiofor actually does some exceptional acting up against Oliver Platt, causing them to almost disappear into another movie with more credibility and less screaming.

Amidst Roland’s advertisement for a suite of outboard tools, there are some genuine touching moments: Chiwetel’s father onboard a cruise ship that ultimately goes Poseidon; Russian pilot Sasha’s (Johann Urb) camaraderie with fellow pilot McCarthy – that’s not to say there’s anything original about these moments. Apart from the Leading Man’s relationships, the strongest emotional bonds are the ones set up to specifically destroy and target our Weeping Gland.

“Chiwetel – relax, man! Why’re you acting the shit out of this shit?!”

Final scenes show desperate humanity trying to board gargantuan “arks” that billionaires have paid to have a berth on. Chiwetel curbs the inherent selfishness of the species by giving Oscar Speech Number 23-a, “What is it that makes us human?” rolling smoothly into importuning, “What will we tell our children?” and ending with the glorious “We can’t build a civilization if our first act is one of cruelty!” which amazes us at how much it makes our flesh crawl.

1) “What is it that makes us human?” Apparently, money. The people clamoring to get onboard the arks, who are in danger of being left behind on the docks – ARE OTHER BILLIONAIRES who already paid for a berth, whom the arks were leaving behind because tsunamis were almost upon them. Opening the giant doors to let them in was not an act of kindness towards homeless bums and underprivileged day workers – it was a contractual obligation to other billionaires!

2) “What will we tell our children?” How about, “I paid a billion Euros to save your necks and you should be building a shrine to thank me!”? Now go clean out the poo in the gorilla cage.

3 ) “We can’t build a civilization if our first act is one of cruelty!” Sounds kinda morally correct – but is demonstrably wrong. Firstly, you already HAVE a civilization built on cruelty. The passengers onboard the arks were chosen because their pockets were one billion Euros deep. What exactly happened to all the middle class personnel who built the ships and maintained the infrastructure while you collected your billion-Euro payments? Oh, that’s right, after they complete their menial jobs, they’re dead to you. At least, they will be when that tsunami hits ’em in their poverty-stricken asses. Secondly, Mr. Black White House Official, have you forgotten that America’s “civilization” was built on the skulls of Native Americans and African slaves?

It’s a good thing no one is paying attention to anything except the special effects. Or we’d all be dead.