Who we foolin’ here? All one needs to glean a perspective on this documentary’s Obama Derangement Syndrome (ODS) is to read the opening lines of any of its “sensible” “unbiased” “objective” reviews; all the waterheads who feel the need to proclaim, “First off I want to say that I based this documentary on the content rather than my political opinions.” Sure you did, waterhead… 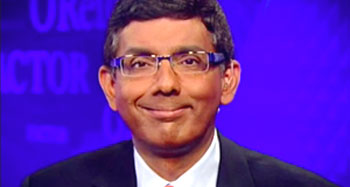 Dinesh D’Souza straining to get more information from his usual source- his arse.

2016: OBAMA’S AMERICA is another documentary-with-alarming-music that preaches to the Republican choir about the black debbil in the White House.

Dinesh D’Souza and John Sullivan co-write and co-direct (from D’Souza’s books The Roots of Obama’s Rage and Obama’s America), with Dinesh (the Indian Mr. Bean) as the talking head/narrator, which proves the documentary is not racist because he’s a black fella himself.

With his facts on crooked and his reenactments proving only that he can overdub neatly, partisan water-carrier Dinesh thinks to compare his own multi-cultural background with that of the 44th President of the United States, and in this way “prove” Barack Obama‘s motivation to deconstruct America and surrender it unto the world. And poor people.

Sigh. Well done, water-carrier. You’ve just ruined your credibility with anyone who wanted to even try to give you a fair hearing.

Where to begin deconstructing this educated asshole’s improprieties? First of all, you don’t “journey” to a country you were BORN in. There’s his first red meat pat on the behind for the redneck Republican base who think Obama was born Somewhere Else and “journeyed” to the United States. Second: Kenya. Look up buzz-word in any dictionary – there’s a picture of Kenya next to a picture captioned “Barack Hussein Obama.”

As soon as you drop the buzz-word Kenya when discussing Obama, it’s all over. We can see through your college degrees and cultivated accent, you provincial swine. In the first minute, Dinesh establishes his bona fides with the unsheeted Klanfolk suckling on his Dartmouth credentials, to bring them some “ejikated” talking points to slam at their “Democrat” brethren over Thanksgiving dinner.

2016: OBAMA’S AMERICA is another hit-piece couched as a “documentary” that relies on its viewers being ignorant. This means YOU, Fox News audience. Dinesh (which sounds like a piano falling into a lake) comes at us “reasonably” by admitting Obama was born in Hawaii— I love how Republican water-carriers who wish to sound reasonable admit that Obama was born in Hawaii – as if that’s some kind of litmus test for open-mindedness! When it’s just a SIMPLE FACT. Yet the “Birthers” (some of whom are high ranking Republicans in Congress) have devolved to such a high state of frenzy that even stating the fact of Obama’s birthplace is a hammer to be wielded in whatever manner you wish to spin it. In Dinesh’s case, it allows his farther-flung conspiracy theories to retain a patina of credibility. It’s the old “admit to a smaller crime to get away with a bigger crime” gambit. Which works for its Fox-indoctrinated viewers. They think he’s just peachy. Even for a black fella.

Piano-Hitting-Lake (see how “alien” he sounds when I use his real unAmerican, Hindu name?) then goes to great pains to map out all Barack Obama Senior’s sexual conquests, and children from all these dalliances, a straw man argument that rhetorically attempts to tie the father’s profligacy to the son. (For all the lessons/motivation that Dinesh claims Barack Junior picked up from his father, there is one lesson that Barack took from his dad that Dinesh refuses to acknowledge: he is an exemplary father and husband. From his father’s example, Barack learned well how NOT to be a bad father.) Using Obama’s own narration from his audiobook Dreams From My Father, Dinesh audaciously claims that Obama’s father issues are reflected in his national policies. Hmm, sounds plausible, I mean Dinesh did say Obama was born in Honolulu so I’ll likely believe him when he says anything else stupid.

Dinesh’s main theme – arrived at laboriously due to its subversiveness – is that Obama is an “anti-colonialist,” another buzz-word that Fox-indoctrinaires use without having the slightest clue what it means.

America itself IS anti-colonial – it was founded by breaking away from its British colonial overlords. But Dinesh goes for a nuanced explanation of anti-colonialism, asserting that Obama wants to break the United States away from its founding principles of anti-colonialism, and return it to a kind of world colonialism. You mean anti-anti-colonial?… But he’s getting too deep in the weeds by this point and his explanations will surely be falling not on deaf ears, but ignorant ones. Whether the rednecks understand nuance – or whether they understand any of this doc – is irrelevant; it makes them feel ejikated if they can just tell their trailer trash friends they watched it.

Obama’s father published a screed on taxes. How high could they be? “Theoretically, there is nothing to stop the government from taxing 100% of income so long as the people get benefits from the government commensurate with their income which is taxed.” Dinesh asks, “Is this what Obama means by ‘paying our fair share’?” Well, no. But Dinesh is just going for it at this point, blathering in ODS frenzy, “So how does Obama do it? How does a guy who possesses a Third World, anti-American view, an ideology as remote and unrecognizable to most Americans as the capital of Kenya or Indonesia, manage to get himself elected? How does he sell this in Peoria?”

Are we done with the buzz-words or should I shelter my genitals from any more shrapnel?

Oh well, the graphics are nice. 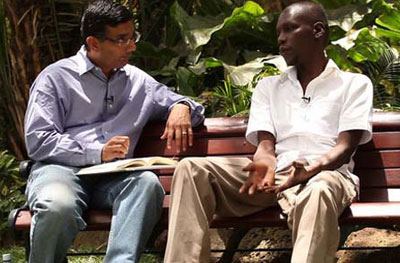 There is an interesting interlude with George Obama – Barack’s half-brother, who lives in relative poverty in Kenya, and who has published a book (Homeland: An Extraordinary Story of Hope and Survival, 2010). George is a soft-spoken, thoughtful, lucid young man (whether he is truly of Barack’s blood, who knows? – but he does remind us of Barack’s thoughtful manner), and Dinesh almost shoots himself in the foot trying to demonize Barack through quotes from George’s book.

Dinesh asks George why Barack would leave him in such poverty after attaining the presidency – but it’s another straw man argument! We need to do our own research to discover that George, inspired by elder brother Barack, chooses to live in Kenya and aid people in poverty. He’s an author, he’s not starving, he’s not destitute – Dinesh would like us to think Barack is living in a golden waterfall palace while his half-brother wears rags in a hovel. Thanks for the Truth, Dinesh!

The premise of OBAMA’S AMERICA is to “reveal” Barack Obama. The slogan: Love Him, Hate Him, You Don’t Know Him. Dinesh tries to “prove” Americans don’t know what to think of Obama, by showing us opinions that are not judicious, objective or informed, but FOX NEWS muttonheads spouting their “communist-socialist-terrorist” mantra. Then he shows Chris Rock (an Obama supporter) merely saying Obama is half-white/half-black, then an ill-informed Baldwin brother speaks, and then a lady with a protest placard. Wow, compelling evidence that the country doesn’t know what to think of Obama. I’ll tell you what the country thinks of Obama, Dinesh: THEY VOTED FOR HIM. TWICE.

The significance of the doc’s title is to warn us of how America might look in 2016 if Obama were reelected. Dinesh has the audacity to simply LIE about the deficit, then state, “The first time, we didn’t know what Change would look like – now we do,” while showing signs of American poverty – never once highlighting the Republican policies that brought about and retain that poverty; never once mentioning how Republicans’ primary goal is to block any policy that Obama proposes – EVEN IF IT’S THEIR ORIGINAL POLICY AND/OR WILL IMPROVE SOCIAL CONDITIONS OR THE COUNTRY’S WEALTH.

To an informed viewer, it is quite obvious how much this supposed objective scholar has left out of OBAMA’S AMERICA, and how much disinformation he has inserted sideways with alarming music.

Michael Moore released FAHRENHEIT 9/11 in 2004 to waylay a second term for W. It failed, and W went on to greater disasters in his morally bankrupt presidency, indirectly responsible for the Wall Street crash that brought on the greatest depression since the 1930s. OBAMA’S AMERICA is Dinesh’s attempt to stop a second term vote for Obama. It too failed. And Obama went on to a second term, continuing to destroy the country by ending two wars, instigating affordable health care and lowering the United States deficit to less than half of what it was when he ascended to anti-colonialist dictator king.

Proves how right Dinesh was, doesn’t it?