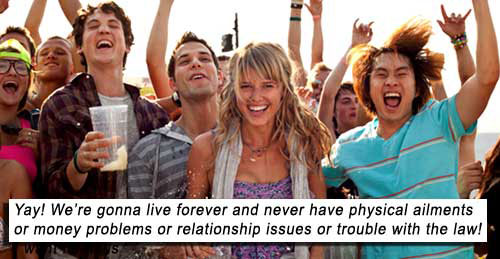 21 & OVER perfectly illustrates why America is at the bottom of the intelligence ladder.  But we can still laugh at it. (Like every other country does to America.)

It’s a drunken college frat farce, so can we get some nude streaking in there? Check. We’ve also gotta have the strict father who wants his son to become a doctor. Check. And how can we forget the sweet silk-skinned 21-year-old hot hot hotties at every turn? Check. Can we squeeze in the blond jock? Oh yeah. Since we’re doing college tropes, can this jock be the boyfriend of the hottest chick on campus? You betcha. And of course, this hottest chick on campus is going to fall for the nerd, right? How’d you guess?! Cops, jail, hospital. Check, check, check. Drinking games? Yo! Dick jokes? Yassa! Puke? Oh god yes!

And every time we say Jeff Chang’s name, let’s say his full name, Jeff Chang. That sounds like the stupidest gag on Earth. Let’s do it.

In this ultimately pointless brainless party journey, there are quite a few pointless brainless laughs. It’s made well, by directors-writers Jon Lucas and Scott Moore (the writers behind THE HANGOVER and THE CHANGE-UP), with snappy dialogue (“Jeff Chang’s dad is going to honor-kill us if we don’t get him to this interview”) and an underlying story that tests a friendship, reveals a hardship, and flowers a relationship.

Miles Teller provides most of the snappy repartee doing his best Vince Vaughn, while displaying the physique that will eventually land him the role of Mr. Fantastic in 2015’s FANTASTIC FOUR, i.e. his obliques are cut and his dick is elastic (see how low to the ground it stretches in that sock?) And Skylar Astin (whose melodramatic comedy stylings impressed me in HAMLET 2) has even better obliques and a long duk dong. As they walk naked across a schoolyard (relax, ladies!), bottoms red and branded, after being spanked by a sorority EYES WIDE SHUT tribunal of justice. Don’t even ask… 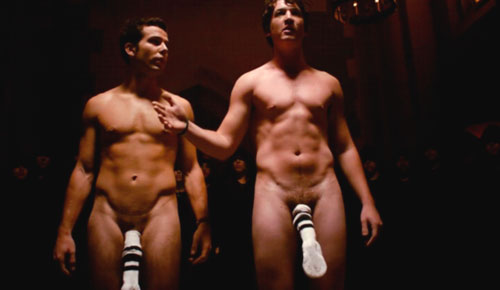 Casey meets Nicole (Sarah Wright) a smug-9, who uses her shoulders and blond hair to talk. As Naomi Watts replaced Nicole Kidman, as Olga Kurylenko replaced Catherine Zeta-Jones, Sarah Wright replaces Alice Eve on the world stage. Really? But Alice Eve is only 1 year older than the 30-year-old Wright who is playing 21. Well, that’s what I mean by women’s shelf life being so short! Eve’s breakout role was SHE’S OUT OF MY LEAGUE in 2010. By 2013, she had topped out with STAR TREK INTO DARKNESS. There is nowhere else for her to go except down the pants of some producer. Soon popping up in mom roles with the requisite unflattering hairstyle and fat-thighed jeans, with lines like, “Hi honey, how was your day?” And with this kind of turnover in female “talent,” rest assured Sarah Wright will also be replaced quite soon – probably about the time this movie goes out on DVD. I’ll keep you posted.

Even in this drunken buddy movie, they managed to twist the focus to a boy-girl reconciliation, and even threw in a bonus cliché – the Bride Running Through Streets gag, with Skylar Astin playing the bitch.

21 & OVER sends its share of stupid messages, not least selling the irresponsibility of trashing yourself the night before an important interview. But there’s further insult to injury to the American psyche, as Jeff Chang’s decision to allow himself to be dragged barhopping and inebriated and unconscious around campus like WEEKEND AT BERNIE’S was not just about celebrating his 21st birthday. It was a disavowal of his strict father’s (Francois Chau) plan for his life. His father pulled strings to progress Jeff Chang’s medical career – against Jeff Chang’s wishes. Jeff Chang just wanted to follow his dream of writing songs. But there’s no established career pathway for that. It’s touch and go, hit and miss, it’s who you know and how you know them, it’s The Hang and it’s luck and it’s right place right time — yet whenever a college character faces off against their father who wishes them an upscale career, it is treated as if the “artistic” pursuit is more noble. No, it’s not. They are both equally neutral options. Being a doctor is not a “bad” thing just because you want to write songs. A doctor is a great thing. So is an artist. But one is not better than the other. Yet this movie makes that age-old mistake of making the doctor father look like a militant asshole bad guy, because it’s not the option the lead character chooses.

Hooray for being too lazy and disinclined to pursue medicine! Keep being irresponsible, American college kids! As long as you’re hot.