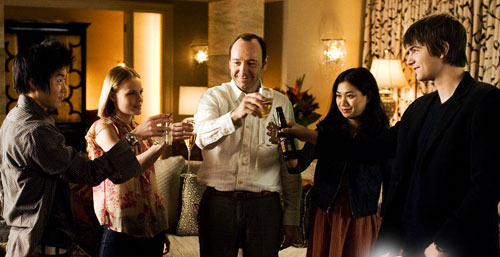 ”A toast… to getting caught quickly and stupidly.”

In this vacuous drama supposedly based on a true story, Old Hand (Kevin Spacey) teaches Teen Models (Kate Bosworth, Aaron Yoo, Liza Lapira, Jacob Pitts) to count cards and take on Vegas. Happens that Old Hand is college professor Micky Rosa, and his Teen Models are his students at Massachusetts Institute of Technology in Boston. I don’t doubt this may be a true story. That the characters displayed such stupidity, I do doubt.

From a book by Ben Mezrich, Bringing Down the House: The Inside Story of Six M.I.T. Students Who Took Vegas for Millions, 21 follows talented young M.I.T. student, Ben Campbell (Jim Sturgess), struggling to pay fees for classes he can’t afford. He is invited to join the covert team of Teen Model Card Sharks (who make us cringe with their Too-Kewl-For-Skool ‘tudes) aiming to break Vegas.

When the Teen Team recruit Ben, they speak like they’re old hands at the Vegas scam, wowing him on how his lifestyle will change, yet when they gather in Vegas, Professor Micky lays down instructions like they’ve never been there before. I call this the Movie-Astronaut Rule: Always save the most crucial information on space travel for the actual journey; never mind that lives are at stake. Do it for the audience… for the love… for The Boys.

The Poff of Clubs

Two glaring loopholes in logic ruined this film: first, the sharks have no fence. These are just college kids. When they rake in large bank, how do they propose to launder it? Ben hides it in his dorm roof, but when he starts paying for that college he couldn’t afford, the IRS is gonna rain down on him like a Vegas jackpot.

Also, their attempts at discretion are ludicrous: they all arrive in Vegas at the same time, sometimes in asinine disguises, check into the same hotel together, go drinking together at strip clubs, constantly acknowledge each other and spend big in loud montages. Smart – but no Common Sense. Their fantastic “secret signal” (on whether a table is hot to hustle) is to fold their arms behind the chair. Nice for some podunk operation in Ohio – but this is Vegas!

Sure enough, a sinister casino cop, Williams (a beefed-up Laurence Fishburne) notices the scam signals on these new inventions called Security Cameras, and uses the Bush Administration Interrogation Policy of “America Doesn’t Torture” to torture some answers outa the dweebs. Williams, on Professor Micky’s tail for years, now sees his opportunity to get Micky through his Teen Model stooges.

In most scam movies, we marvel at the ingenuity of the criminals. In 21, we cringe every time these jokers are onscreen. Spacey and Fishburne carry the movie on their shoulders alone, as every time we turn to the Teen Models, Sturgess is too busy looking like Tobey Macguire and Kate Bosworth is too busy pretending she’s hot, and the movie falls flat.

The attitude casinos have towards “counting cards” bugs the babyjesus out of me! In Blackjack or 21, everyone maintains counting cards is not illegal. So why do casinos allow any jackass to play the game except those who are exceptional at it, who can count the cards? Casinos will fleece anyone, but anyone who fleeces them – legally – is taken to a room with no windows to get the intelligence beaten out of them…

Ben loses his mind over plain Bosworth and starts losing and drinking, and then defects from the Teen Team to scam solo. To stop Ben’s stupidity leading up the chain to Micky himself, Micky grasses up Ben to the authorities – sadist Fishburne. He had every right to do this, as Ben was “gambling not counting” with Micky’s outlay-money, so Micky cut him loose. It’s a dog eat Teen Model world out there.

However, Ben has one last con up his sleeve. He gives Speech Number 32 in the Generic Screenwriter Inspirational Speech Catalog (the “Let’s Do This One Last Time… For the Honor, For the Game… For The Boys” speech) – and grasses up Micky to the Ethical Non-Torturing Fishburne, who proceeds to torture Micky.

The twisted message 21 sends is that even though the Teens betrayed their mentor and he tried to protect himself, the Teens won by being even more unethical, amoral and underhanded. And they’re justified because… well, because they’re Teen Models fer cryin out loud.