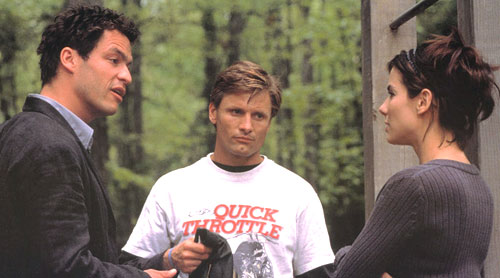 An alcoholic is always between dicks…

Hey, Alcoholics, Do you really want to be portrayed this way? Not only having to go through the physical pain of withdrawal, the humiliation of prostrating yourself in front of snide voyeurs, the loss of income, respect and friendship, now you also have to endure 28 DAYS representing your rehabilitation as kindergarten for grownups with mental disorders. So, uh, you love watching soap operas and not having sex and chanting slogans like incognizant dummies? This movie tells me so. You don’t like it, take it up with Columbia Pictures…

Sandra Bullock is having way too much of a good time to be a good christian. She’s fun drunk Gwen, and along with fun-drunk boyfriend Jasper (Dominic West), she ruins sister Elizabeth Perkins’s wedding with her douchey dancing and falling into the cake and stealing the limousine and have we hit rock bottom yet? Well, maybe in real life; but in cinema, we’ve just hit the first ten minutes of Teen Movie.

Sentenced to 28 days in rehab or jail, Gwen chooses that option that we’d all choose because we’re exploiting the system that considers alcoholism a disease.

If you know the first thing about rehab centers – not just those under the AA banner – you’ll know that each of them operates under a different set of rules, condescendingly looking down on other centers’ protocols. Oops! Gwen gets one of those centers that confiscates your meds (as if to spite her); ulp! It’s one of the God-is-Great places; oh, and they chant (“ho ho ho – alcohol has got to go!” “keep your whiskey sours – we are blah blah higher powers”) and – shit! – this is one of those toilet-cleaning places.

Other members include Alan Tudyk (an especially zealous member, who can’t seem to decide what accent he wants to use), Reni Santoni (being Dirty Harry’s partner will land you here), Mike O’Malley (who wants to bullock Sandy). And a Meet Cute with the love interest for the sake of swoony girlies – it’s AA – Alcoholic Aragorn (Viggo Mortensen, this close to the release of THE LORD OF THE RINGS, looking like man meat about to be jumped by groupies. Or orcs.).

A solid performance from Steve Buscemi as the counselor, serious as a relapse. He gives Gwen books – “literature about your disease,” which means it really isn’t “literature” in the common usage of the word, if it considers alcoholism a disease. (Let’s get this straight, Alcoholics: nowhere in any medical literature – real literature – will you find alcohol listed as a “disease”; the only “disease” associated with alcoholism is when your liver catches on fire – then you’ve got liver disease.) He relates a story to his “group” about waking on a sidewalk covered in blood, and I realized… You people just loooove these vicarious war stories, don’t you? It’s sob-story paradise; it’s voyeur delight; it’s reality TV, every lick-your-lips mishap and outrageous party turd in the swimming pool. Soak it up, Spongebob.

Of course, Jasper is shown as irresponsible so that Gwen can make out with Aragorn in good conscience. Which she does. But what if Jasper wasn’t irresponsible? What if he was 9-to-5, and helping her recover, and going straight himself? Well, let’s see… Jasper visits one day, proposes marriage, and says he’ll go straight for her. There is no indication this is just a ruse or a lark. (It’s probably impossible to adhere to, but that’s not the point – his intention is sincere.) What does Gwen do? “I can’t stand this ‘straighten up and fly right’ shit!” Then what DO you want? If you can’t stand it when your man goes straight, and if you can’t stand it for yourself, would you prefer jail? Oh, no thanks, unlike AA and all its Jesus talk, jail is real. As soon as Sandy says that line, this depressing propaganda turns into contradictory dungbeetle. No surprise. AA thrives on contradictions. Here’s a good one: “Only God has the power to get you straight” – but apparently he wasn’t strong enough to keep you sober in the first place.

It’s not exactly AA, but it’s close enough, and we know that anyone who creates this sort of quasi-preachy media has been shredded through the AA machine a few times. Good for you, director Betty Thomas and writer Susannah Grant – you kicked your habit, you “got sober” for a few months to schlep this message movie into being. I’m happy for you. But you know, your group didn’t do it. God didn’t do it. YOU did. And you weren’t “cured.” You just stopped drinking.

O’Malley’s doughy guy character is constantly coming onto Gwen. Does she reciprocate? Does she even consider not treating him like an infant, with that snide snigger every time he flirts with her? Matter of fact, everything he says is placed in the “creep” bin; not one person in the film or in the audience takes this guy’s overtures seriously! Why? Because we’ve been conditioned by assholic Hollywood convention to believe that doughy guys just don’t mate. Their genes are going to die out soon, to be replaced by genes from Dominic West and Viggo Mortensen. This lesson is paid forward, backward and sideways into every single Hollywood movie.

Pity no one gleans the real lessons this film has to offer. Example: Gwen’s roommate (Azura Skye) overdoses the day before she is scheduled to leave. Lesson? Proof that the program doesn’t work for everyone, just those who are strong enough to kick their addiction. And if rehab only works for the strong, it means the weak will always relapse, which means they’re wasting everyone’s time. Why don’t we let their “diseased” genes die out so as not to multiply into the human species? Ignore lesson. Continue doing what you’re doing, i.e. drinking or not drinking… makes no difference…

Netflix review (5/5 stars)
[VERBATIM] Havin a family history of substance abuse, I found this movie to be off the mark regarding the rehab scenes in a lot of ways. However, if you’ve never been to exposed to the effects of alcoholism, this movie will give you a better idea of what AA members face. Sandra Bullock acts her little heart out, and I believe genuinely tries to put a nice face on an otherwise extremely ugly disease. I found the end to be the best part, as she realizes what the meaning of a horse’s hoof really is.

This reviewer inexplicably rates the movie 5/5, even though he/she says it’s off the mark. Another tell that the movie is Hollywood-ized: reviewer realizes Bullock is putting a “nice face on an extremely ugly disease.” I don’t agree with the “disease” epithet but the reviewer sees through the façade of the Hollywood Alcoholics Movie protocol – they may be assholes, but at least they’re pretty.

Netflix review (2/5 stars)
[VERBATIM] In spite of terrific acting on the part of all the leads (not so much the minor characters), this is the same tired view of the alcohol/drug addiction dilemma that we’ve always heard: “You have to want to save yourself in order to be saved.” Alas, while there is tremendous confusion about the root causes, a certain percentage of these people can’t be changed, and it’s no good preaching at them, threatening them or doing anything with them other than minimizing the damage they’re able to do to others. If that message had been present in this film, I would not have found it brilliant, but I would have at least felt it was a realistic depiction of the problem. Bullock is convincing as a drunk, but not as a woman in recovery.

A great observation on including the fact that some people cannot be saved. It might have been portrayed in the girl who overdosed, although not dwelt on. The biggest problem with AA is that they boast that everyone is curable through the Lord God Shinto Boolshittima. But they’re not.