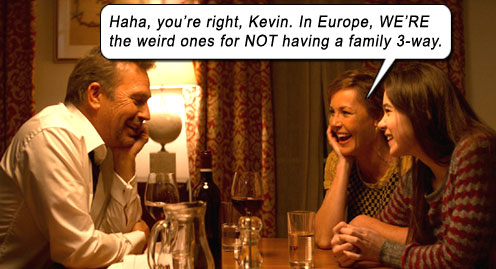 Kevin Costner is suitably grizzled CIA agent Ethan Renner, suffering from a terrible case of Screenwriting Clichés: he’s got The Hollywood Cancer with 3 months to live and he’s got The Estranged Wife and  The Strong-Willed Teen Daughter whom he is Trying To Connect With while he’s on One Last Mission with 3 DAYS TO KILL.

In this well-produced action-comedy, shot around England, from a screenplay by master fantasist Luc Besson, Costner is suitably hard and makes some cool killing moves, but his performance is brought down by the WATERWORLD Syndrome: that is, Hard Guy becomes Softee to take care of female. Happens in TRANSPORTER; happens in THE POSTMAN; happens in GROSSE POINTE BLANK. But it never needs to happen – the hero could be protective and still hard (TRUE GRIT, DIE HARD, MILLION DOLLAR BABY), but that mindless cliché of leaching the hero’s masculinity is usually mishandled for gutless pc purposes. 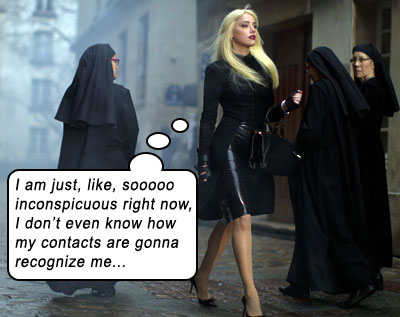 So Ethan is emasculated. First, the disease, then the smokin’ wife who disrespects him (Connie Nielsen with sensual orange locks, looking like an elder version of Kirsten Dunst), then the daughter who keeps whining, and then — Amber Heard as undercover agent Vivi (whose idea of being undercover is to dress like every man’s idea of a prostitute), who hires/blackmails Ethan to kill an operative called The Wolf (Richard Sammel), in return for a cancer cure. Tooling around with a look that says Move over and let me blow you, the chain-smoking Vivi turns up and kills all the guys Ethan is supposed to be killing, because he’s getting so humorously old, which leads us to question the redundancy of one of them at least. (Let’s just lose Ethan and watch the whore in the leather and wigs try to look inconspicuous.)

Though the movie has some dry humorous turns, its punch is further ruined by McG‘s fartsy direction (that’s artsy-fartsy without the artsy).