In the first film appearance of Martin and Lewis, 1949’s MY FRIEND IRMA, Jerry Lewis was “written in” as a sidekick to Dean Martin’s character, who was integral to the plot. 5 years and 11 films later, now Dean is the fifth wheel in 3 RING CIRCUS.

Jerry is Jerome “Jerry” Hotchkiss, and Dean is Pete Nelson, both discharged from the army and aiming to join the circus, Pete as a general layabout, and Jerry as a clown. After stints as lion tamer, elephant washer, custard vendor, human cannonball and dunking patsy, Jerry at last gets his chance, donning makeup and baggy pants and inadvertently stealing the show from the head clown, who is a lush that doesn’t take Jerry’s intrusion into his milieu kindly. While Dean is, uh… Dean is Pete Nelson.

Although Lewis was always interested in expanding his two-dimensional typhoons into more poignant characters (we can see snatches of his attempts in THAT’S MY BOY, THE STOOGE, THE CADDY), 3 RING CIRCUS marks the first time he fully explores the nuances that his hero Charlie Chaplin embedded in all his nutty roles. Yes, other people screenplayed the movies Martin and Lewis acted in, but Lewis is an uncredited writer in almost all his “bits” and he had much more control than most audiences realized over how both his and Dean’s characters were perceived.

I really like the opening scenes of 3 RING CIRCUS. Both Martin and Lewis come off as great pals, not even overacting their usual sex-and-monkey characters; they’re both pretty moderate, average guys stuck in a comedic situation (Pete getting molested by people he owes money to, as they try to make their way out of the barracks, eventually dipping into Jerry’s share to make it out alive). With Martin in such good humor during this production (and touchingly standing up for Lewis during fistfights, arguments and employment situations), even when his character does enter morally questionable territory, it is not as mean-spirited as some of his earlier roles, as in THE STOOGE or THE CADDY. So there’s an overarching feeling of happiness in seeing Dean and Jerry working together so well…

… however, by all accounts, they’re not really working together so well. 3 RING CIRCUS would mark one of the first instances of the cracks in Martin and Lewis’s professional relationship, with the magic of cinema and editing covering those fissures. Of course, no one (except Dean and Jerry themselves) would know exactly when the duo began to grow apart, and this movie is as good a demarcation line as any to note the uncomfortable mood on set. Reportedly, one morning Martin turned up late on the set and said to Lewis, “Any time you want to call it quits, let me know.”

Lewis would later say in interviews that for eight years it was great, and the last two were like a bad marriage. Add to their fracturing psyches: bad blood between them and their longtime producer Hall Wallis; Martin getting antsy to play more substantial roles; Martin feeling that Lewis was holding him back from a solo singing career; Lewis maturing and wanting to shed his “nine-year-old” character in favor of more realistic adult characters; Lewis feeling stultified that Martin, ironically, wanted to simply churn out quickie laff vehicles instead of explore, as Martin put it, “Chaplin crap.” 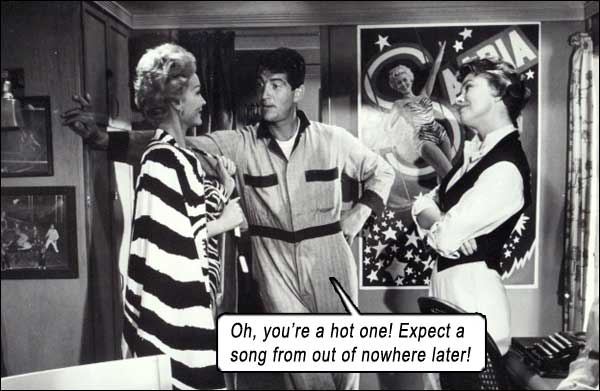 It’s no secret that 3 RING CIRCUS finds Lewis channeling Chaplin’s clown in THE CIRCUS (1928). And therein lies the glitch with this movie: if it is a “Martin and Lewis” vehicle, Lewis’s arc is diluted because Martin is shoehorned in for marketing and the business partnership. However, if we consider Jerry Lewis the “star” of the story, with Dean Martin merely a B-character, it tracks much better.

Jerry’s quest to become a clown can be taken in myriad ways. Is it a noble quest, considering that the clowns in this movie are portrayed as lame pratfallers, with the head clown an alcoholic? Or is Jerry going to save the clowns from their mediocrity and vices? Then again, Lewis’s style of mugging and moving is much funnier than any circus clown. So why is he trying to go backwards? It’s a strange conundrum we have here.

Gene Sheldon plays the mirthless head clown, Puffo (we know him as the mute Barnardo in the 1950’s TV series ZORRO, starring Guy Williams), who is immediately jealous of Jerry’s natural knack of inspiring laughter. Everything Jerry tries sincerely, ends up inadvertently funny (aiding the high-wire act, being shot out of a cannon, trying to retrieve a puppy in the audience), while Puffo watches in miserable jealousy.

In one of the most disturbing scenes in any Martin and Lewis film, Puffo attacks Jerry physically during a show, while they are both performing as clowns: When Puffo senses the audience laughter is aimed at Jerry instead of him, he tries to salvage his primacy and knocks Jerry over as if in jest. Then he kicks Jerry while he’s down and steps on his back as he tries to rise. Even the crowd emits a startled gasp. Pete comes through for Jerry, starting a slow clap for him in the awkward silence (another example of the poignancy of their relationship). Jerry, innocent as always, forgives Puffo to his face after the incident, in unbounded empathy.

After Pete and Jerry duet on Punchinello for the circus troupe, mean-spirited Puffo is fired and Jerry is christened “Jerrico, the King of the Clowns.” Really? Seems a tad unfair to all the other veteran clowns of this circus, who were also anti-Puffo. (An edited version of this film was released in 1978 titled JERRICO THE WONDER CLOWN.)

Of course, the owner of the circus is a beautiful woman, Jill (Joanne Dru), whom Pete can fall for. And there’s the snide bitch, the star of the solo trapeze, Saadia (Zsa Zsa Gabor, young and tight and tempting applebottom), for whom Pete becomes a whipping boy. We only accept that both ladies fall for Pete because he’s Dean Martin, Ladies’ Man. If he was just Some Guy, his bouncing between applebottoms would be impossible to accept with the bland characterization afforded him.

Sam the circus manager is old Wallace Ford, who has a unique experience in disturbing circus movies – he starred in Tod Browning’s FREAKS (1932). Watch for Sig Ruman (Dr. Eggelhofer from LIVING IT UP) as the German lion tamer. And here’s Kathleen Freeman’s first cameo appearance in a Jerry Lewis film (as a custard customer); she also has circus experience (as a spectator) in DeMille’s and Heston’s THE GREATEST SHOW IN EARTH.

Filmed with the cooperation of The Clyde Beatty Circus, a fifteen-car traveling circus train, the movie retains a sense of authenticity, with many scenes of elephants, big fluffy-maned lions and other critters. As more testimony to this being “Jerry’s film,” Martin doesn’t even get a song until an hour into the movie – and then, not to a dame, but a menagerie of animal couples, whom we presume got busy after hearing Martin’s dulcet croon.

The two most touching segments of dialogue are when Jerry is threatened to be fired, and Pete reassures him: “You’re a real funny guy. You’ve got something you can’t buy or make. Inside you there’s a bug that makes people ticklish. One of these days, that thing’s gonna bust loose and when it does, somethin’ real nice is gonna happen to the whole world.” Touching because it’s what Jerry Lewis actually is. And what Martin and Lewis actually did.

Then Jill tries to fire Pete for bringing gambling to the midway, but is restrained because: “You can’t leave – not while your biggest marble in your bank is Jerrico!” Pete asks Sam, “What makes her think I’d take Jerrico?” Sam replies, “You don’t have to take him. Jerry loves you – he’ll go with you!” Again, the truth behind the fiction.

Even though their rift was widening, both Martin and Lewis seem the most chummy they’ve ever been on film, Martin getting many opportunities for funny lines and gags, which he pulls off effortlessly in his low-key manner. (He also gets a body-shaved parallel bar routine, that almost makes up for his singing – if it weren’t so obviously a stuntman.) 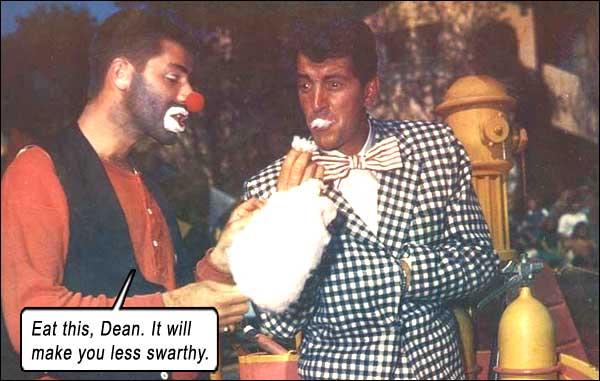 Some simplistic misunderstandings lead to Jerrico doing a children’s benefit, while Pete declines the supposedly noble cause to callously move on with the circus train. Even with all the plot discrepancies and childish mugging, Jerry and Pete share a mature arc of fundamental disagreement and reconciliation. One wonders how Martin and Lewis might have grown in film had they continued after 1956.

In the final sequence, Jerrico is doing everything in his power to make a little crippled girl in the audience laugh. (Some speculate this was the genesis of Lewis’s love affair with the Muscular Dystrophy Association.) It is only when he sheds a tear for her that she laughs at him. Even as a kid, I realized this is actually a very hurtful resolution to this scene. The girl yelps in joy: “The clown is crying!” and I have to ask myself, “In what twisted environment was this little monster raised that she would find a crying person funny?” Usually people with her disability are more attuned to empathize with people who are hurting. This clown is obviously hurting – empathizing with her deep sorrow that no comedy can cure – and she laughs at his pain! Horrible parents, breeding a horrible urchin. Is that really the message the film wants to convey?

Then another resolution that is touching yet equally stupid. Pete, who is supposedly elsewhere with the circus train, can suddenly be heard singing Punchinello, clear as if he’s here in the outdoor arena with us. He arrives in a clown car, thereby ending his beef with Jerry, whereupon many clowns pile out before Pete himself does. So how did we hear his voice so clearly from within the bodies of clowns? Was he laying sideways across them with his mouth out the window? And where’s that orchestra that I can hear accompanying Pete? Did he bring a real orchestra in the clown car? Nope. Is it playing on a portable device? Nope. It doesn’t matter, because every one of the little urchins now somehow knows the backing vocals to Punchinello as well, as the whole arena fills with song and proves that musicals just make clowns of us all…