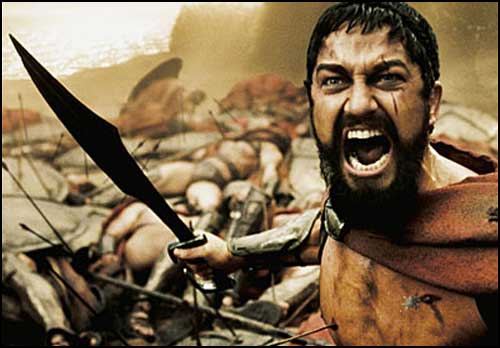 It’s hard to get the waiter’s attention while dining in Hell.

That reminds me, I need to hit the gym.

Some say 300 is as violent as Mel Gibson’s APOCALYPTO, but it’s not. 300 elevates violence to a new level – violence as art. Sure, APOCALYPTO and other movies that push the envelope on graphic pain could be construed as “art” – but only in 300 is the leg-lopping and artery-severing so balletic; only in 300 is the glittering pain so beautifully blood-smattered, so sensually body-oiled.

300 is ostensibly the story (legend, if you will) of three-hundred Spartans led by King Leonidas, who fanatically and suicidally opposed 100,000 Persians at the Battle of Thermopylae in 480 BC. 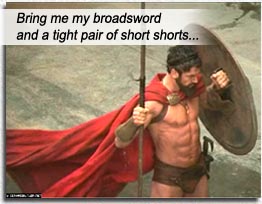 But other than that base fact of 300 battle-bred Spartans (allied with a sprinkling of undisciplined warriors from other city-states) smashing up against the insurmountable forces of Persian King Xerxes, most of this movie is fancy-pants in a jester’s bodysuit. Exhibit A: Xerxes himself (Rodrigo Santoro) – eight-foot tall, golden-skinned, face- and body-pierced androgyne with a ProTools voice.

I’m pretty sure there were no LORD OF THE RINGS elephants back in 480 BC; neither were there giant ogres, mountainous rhinos or executioners with blades for arms; 300 shoves dramatic license in our faces like a Medical Marijuana Certificate, whilst paying documented historical accuracy the shortest of shrifts. But the movie – and this review – should not be judged on didacticism. If you didn’t pay attention in school, I’m not going to refresh your memory of the Hot Gates here – read about it on the net. The beauty of this movie lies not in its adherence to fact, but, quite simply, in its Beauty. It just LOOKS so damn good.

Even before we mention the director or writer, the art directors should receive their accolades – Isabelle Guay, Nicolas Lepage and Jean-Pierre Paquet. The numerous CGI companies onboard this production (without whom this movie would have no backgrounds!) also warrant hefty acclaim, imbuing such a vibrancy of rust colors, warmth and grit to the production that every single frame is a 70’s album cover.

Directed effusively by Zack Snyder, screenplayed by Snyder, Kurt Johnstad and Michael Gordon (from the graphic novel by SIN CITY’s Frank Miller and Lynn Varley), 300 is a living, breathing Frank Frazetta or Boris Vallejo, screaming at the seams in four dimensions.

As with SIN CITY, sex and violence is back on the big screen where it belongs. 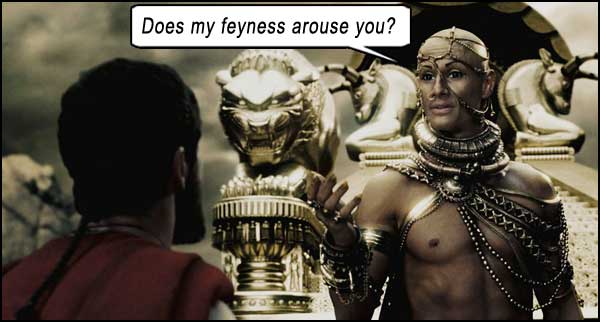 In this world where kings were Real Men and torsos were chiseled like marble statues, we meet Spartan King Leonidas (Gerard Butler – who only 4 years ago made a mule’s ass of himself in Richard Donner’s pathetic TIMELINE, now making mule’s asses of everyone around him with his Stentorian resolve, power pecs and Abs Absolut), who holds a very modern view of the Delphic Oracle (“not taking the ravings of a drunk teenager seriously”) and leads his warriors to battle against a Persian invasion contra the advice of the Ephors (a council of elders suspiciously resembling Yellow Bastard – either lepers or really heavy drinkers – Frank Miller’s fingerprint, mayhaps?).

Leonidas’ wife, Queen Gorgo (Lena Headey) sees Leonidas off with the Spartan credo on her lips, “Come back with your shield or on it”; as the Spartans themselves slam into glorious battle, spitting, “No prisoners! No mercy!” Strategically using the narrow Thermopylae Pass as his stand, Leonidas negates the overwhelming might of the Persian army, who are forced to come at the Spartans in manageable numbers, breaking like ephemeral surf upon Leonidas’ indestructible Spartan phalanx.

When Leonidas bellows, “No Spartan dies today!” we know he means it. It is the resolve of a real leader, the likes of which the world of politics (read “duplicity”) has long since forgotten – this is not someone who would hide behind his disgraced office, his criminal cabinet and his unmitigated ignorance and pigeon-chested physical weakness – Leonidas bellows from the front line of a death-dealing phalanx, shield and spear wielded for Maximum Hurting. No prisoners. No mercy. No rhetoric.

After awe-inspiring battles (where film-speed works as effectively as CGI to convey the melee – sudden slomo alternated with sudden slashing speed), where we see the machinery of the concerted Spartan shield and thrust attack in its trained glory; after building their enemies’ bodies into unbreachable walls and massacring the feared, “unkillable” Immortals in their hundreds, the Spartans are undone by betrayal.

Trained from youth to be insensitive, unfeeling killing machines, even betrayal cannot make them turn tail or change their tactics. The Spartans embraced death as lustily as they lived life, so when Leonidas exhorts his men to “Prepare for glory!” they look forward to a “good death,” not victory. They all die (not that I want to ruin the end, but if you’d listened in school, you’d know this). Yet the 300’s glorious, doomed stand served to buy some time and unite the Greek states, enabling them to halt the Persian assault on other fronts.

Yet even in this fictionalized heightened reality, the “democracy” the Spartans fight for is as dysfunctional as its modern version, if the body politic of Sparta is any indication (consisting of old guys who look like Archimedes and one male model, Theron (Dominic West, THE WIRE), all maneuvering quite independently for their own political agenda, Theron himself manipulating the Queen into a hot blackmail bang. Democracy in action. Further, the country retains slaves and monarchic/autocratic notions such as “kings” to begin with.

300 uses that old ploy of giving British accents to the ancients, because – well, somehow, it just sounds right. Butler infuses his Leonidas with a Connery-syrup brogue and a very pointy beard, Vincent Regan is wholly British as Captain, and David Wenham (in the largest leap of any of these actors – from CROCODILE HUNTER: COLLISION COURSE to Thermopylae) narrates in squinty, Aussie-Briton melodramatic overcheese. Having seen them for years in other roles, the question remains, “Under all their clothes, were these guys always that built and body-shaved?”

Truly, a Guy Movie – with every half-naked, startlingly-defined warrior a chip off a Chippendale for the laydayz. (The Spartans did, in fact, wear breastplates, but again – no apologies for liberties, especially body-oiled liberties.)