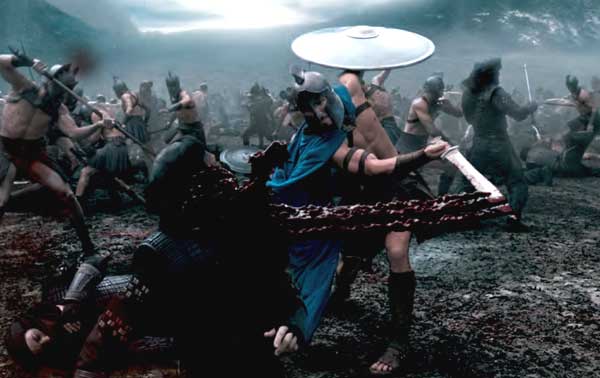 Looks like all the blood rushed to his head.

Oh, it still looks amazing, with the same ochre tint and album-cover pizzazz as Snyder’s epic, with that same filmic technique that lovingly embraces the crystalline gore, but the story (by Frank Miller, from his unpublished graphic novel, Xerxes) tries to cover so much ground (from before 300’s battle at the Hot Gates – to its consequences), that the movie loses itself in a lengthy story that seems to have no goal. Also, the term “300” has no meaning here, as that battle is happening in another movie. So…that’s naff. Also, “rise” of an empire? When the imperial Persians are clearly defeated by movie’s end. So, uh, who? What? And the lead characters don’t stir any empathy; they’re plastic tropes caught between trying to be “historical” and damn sexy. RISE OF AN EMPIRE seems like eye-candy pixel-ocean battle-fest for the sake of eye-candy pixel-ocean battle-fest.

For context, the movie opens by drawing us in with man-meat: the final shot of 300, King Leonidas (Gerard Butler) dead on the ground, amongst a sea of Spartan warriors, Persian arrows and urgent abs. Mmm, those rippling abs, those tight leather loincloths…

Needle scratch as the movie takes up the tale before that groin-splitting defeat, with a whole ‘nother Greek ab-roller, Themistokles (Sullivan Stapleton), leading Athens in a sea battle against those very same Persians, killing their leader Darius with a groin-splitting arrow, which prompts Darius’s son, Xerxes (Rodrigo Santoro) who looks like your average masculine warrior), to step into a pool of gold and emerge stripped, cleansed, towering, glamorous and smooth (just like my peepee!). We also hear, through lugubrious narration, of the Battle of Marathon – but we don’t get to see that streaker who ran 26 miles, 385 yards to deliver the glorious news to Athens, thereby giving the Olympic race its name before dropping dead. You lost me at empires rising, yet portraying them falling.

Xerxes is supported by Artemisia (Eva Green), who is the lead villain here. She is the one who helms the sea battles, she is the one who coaxes Xerxes into a pool of gold, she is the one who tries to look sexier than the men and fails. This dilutes the connectivity between this move and 300, as Xerxes seems to be the Emperor Palpatine behind the scenes, rather than the chief instigator of mucky-muck. 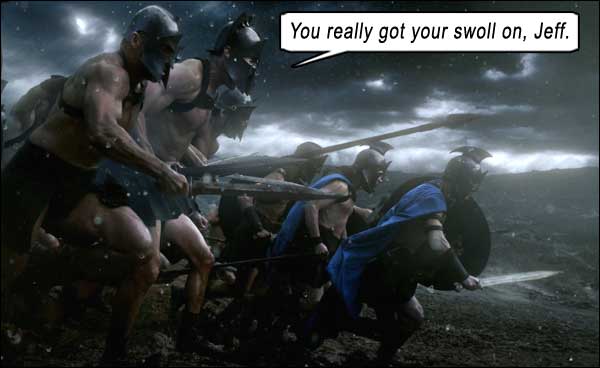 So even with the origin story on how Xerxes became a golden tranny, that thread is rendered irrelevant when we realize the actual chess game is between Themistokles (with all his ships sporting the Verizon logo) and Artemisia (whose ships are as evil as her hairdo). He out-tactics her Persians by using side-ramming and Hans Zimmer’s outrageous drumming soundtrack, and she out-tactics him by using petrol in the water and even louder drumming soundtrack. What I’m saying is, with all the rain and tidal waves, the strawberry body oil keeps washing off…

Stapleton and Green cannot hold our attention – even with Green’s attempted rape of Stapleton’s Themistokles, to entice him to go home instead of wasting both their navies in battle. Aussie Sullivan is one of those solid actors you call for a secondary cop role or a henchman; he lacks the gravitas and star charisma that Butler oozed, required to propel a tale this flamboyant. And Green (she was Vesper in Bond’s CASINO ROYALE; the one he lost his balls to) just looks like she’s “acting” evil. And it really doesn’t help place us in ancient Italy when everyone is speaking like Ian McKellen enunciating Shakespeare.

Lena Headey reprises her role as Queen Gorgo – but though this is the same time period (Themistokles actually visits her while the 300 are away getting their taut asses handed to them, regarding them as fanatic gym-rat extremists) – Headey looks ten years older! (Because she is!) Gorgo is not interested in uniting Sparta with Themistokles because he uses a different brand of body-oil. We see the continuance of David Wenham’s role from 300, as one-eyed Dilios, he and Gorgo eventually leading the Greek states against the marauding ships full of Persians. But didn’t you just say you weren’t…?

You lost me at groin-splitting.