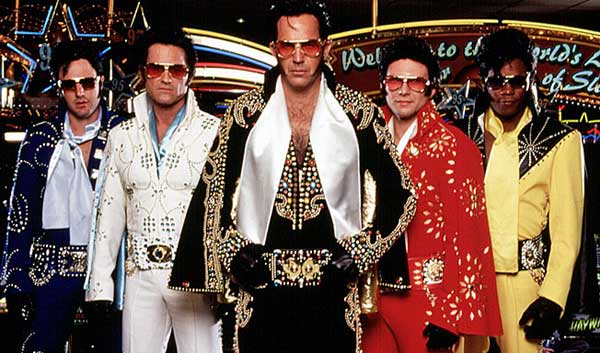 Another Nail In The King’s Coffin.

Obvious from the outset that this Clambake would be a shameless Hollywood glam-scam, wise men say only fools rush in – and Kurt Russell, the best Elvis of all time (well, uh, besides the real one…) – gets himself into Double Trouble by donning this cape. A-uh-huh. 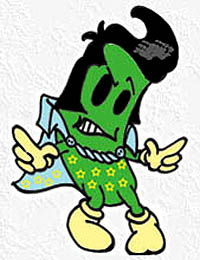 Poster, slogan and title of 3000 MILES TO GRACELAND are completely misrepresentative of the movie itself: you’ve seen Kurt and Costner both healthily Elvis on the ad campaign, slammin’ slogan Crime Is King splayed under their bejumpsuited selves – but the thrill of the heist and subsequent escape shreds like shooting-range flak in the first thirty minutes, which are very Super-Hero, Hard Guy, MTV-jump-cut, All Shook Up, flaming-gun-barrel, sneered lips, sequined cloaks and tight-panted thighs. And Kurt gets bonked twice by Courteney Cox in the ghetto! The film title refers to the cross-country trek Costner makes in an ambivalent attempt to escape the lazy arm of Thomas Haden Church’s and Kevin Pollak’s Law and make Crime pay.

Though an Elvis Heist may seem goofy on paper, the irony is, the first thirty shake rattle and roll minutes – whilst actually pulling off The Elvis Caper – are the best gutshock moments of the film! The rest of the movie meanders like a deer caught in the headlights of its own exposition – that is, the movie was run down by the quality of its opening sequence.

Then came act two, you seemed to change and you acted strange – and why I’ll never know. It degenerates into your clichéd tale of Costner offing the rest of his purple gang to keep all the loot fer hisself. His gang: David Arquette (perennial nerd and ultra-jerk – if a King Dork like this guy can score a bonk-junkie cyberbabe like Cox, there is yet hope for the rest of us), Christian Slater (walking the edge of Hard Guy and Court Jester), Bokeem Woodbine (token black dude), Kurt Russell (a hunka hunka burnin’ love) and Kevin himself (screwloose hard guy with a really tasty gun).

Well, Costner – bein’ nothin’ but a Hound Dog – offs the whole gang within five minutes of the heist, thinking he has also offed Kurt – but Kurt’s wearing kevlar! – suddenly we are asked to accept that the coolest of these cats would be pussy enough to don a vest!? (Lord almighty – I feel my temperature risin’.) And here we were thinking that all these men laughed in the face of death and flicked the ear of fatal woundings. Obviously one of them possesses enough insight and forethought to be wary of an Elvis impersonator who sports mutton-chop sideburns not as a disguise, but as a fashion statement (Costner), thereby sullying his Badness altogether, as we realize that he has all the impulsiveness of an Accountant! Through Unconscionable Afterthought Plot Points, Kurt makes off with the heist money, trailer-trash Courteney and her klepto kid, while Kevin is trying to extricate himself from the Egregious Coincidence Screenwriting.

So Kevin goes after Kurt, picking up a Long Legged Girl (With A Short Dress On) along the way, killing a guy, blowing up a gas station, doing all those hard guy things that come natchelly to hard guys like his bad self.

Round and round it goes, with Kevin and Courteney and Kurt and kid and cash in innumerable combinations of chasing each other, stranding one another, hi-tailing it down freeways, double-crossing, blackmailing, return to sender, snidely-whiplashing their way across the country, padding the film like a big fat Teddy Bear.

Meanwhile, Thomas Haden Church and Kevin Pollak, playing the two laziest detectives ever committed to celluloid, half-heartedly follow Costner’s trail of mindless meandering, mentioning at one point that Costner is “about 3000 miles to Graceland”, and deliberating as to whether he is the Lost Son Of Elvis. A Little Less Conversation A Little More Action, please! The paternity is never resolved and by movie’s end, when Church and Pollak are standing over Costner’s bloodied corpse, we are left guessing as to whether he was Elvis Junior – Is your heart filled with pain, shall I come back again? – Please, no sequels! I’m Hurt, much more than you’ll ever know.

Near movie’s end, there is the incongruous appearance of Ice-T, brought in to help Costner kill some cops and step on some blue suede shoes. Kevin tries shooting Kurt again, but Roustabout Kurt has another vest on – And Costner, not having a Suspicious Mind, falls for it again! Nothing really mattered to me by now, as I was bothering people around me who were all trying to get a little sleep, with my hip-shakin’ and my big collar.

In a climactic sequence – styled along the undeniably classic film-making of Ed Wood – Ice-T, suspended by his feet, spinning upside-down, gets his Mojo Workin’ and comes swinging across the shootout on a guy-wire with two machine-guns taped to his arms, blazing in all directions, as cops unload into him. It’s almost worth the sit through this shiftless movie just to witness how excruciatingly hilarious his demise was. Almost.

3000 miles of inane script later, at movie’s end, Courteney and Kurt and kid and cash sailing off into the sunset on Kurt’s boat, named – what else? – Graceland.