When you shoot the devil in the face… you’d better hope he’s not Russell Crowe.

Every way of man is right in his own eyes.
– Wade quoting the Book of Proverbs, 3:10 TO YUMA.

Every modern Western released after Eastwood’s mighty 1992 elegy has laid hollow claim to “The best western since UNFORGIVEN.”

That’s because – like UNFORGIVEN – YUMA is not a “Western,” but an operatic tale set in the old west, balancing themes of honor, cowardice, heroism, paternalism, on the simplicity of the road movie, the buddy movie, with magnificent performances, nuanced, subtle, graceful and uncompromising. 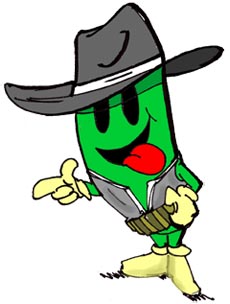 Phew, my thesaurus is bloody…

A crippled rancher, Evans (Christian Bale), must escort notorious captured outlaw, Wade (Russell Crowe), miles into town to put him onboard the 3:10 p.m. prison train to Yuma… With all hell on their trail.

Set in the 1880s, shortly after the Civil War, we meet rancher Evans (Bale), down on his luck, one foot lost to the war (in a heroic battle, he tells his sons), barely supporting a wife and two boys, staring into the abyss of a drought, while the local authorities constantly try to run him off his farm to make way for a railroad…

While Wade (Crowe) nonchalantly robs a bank stagecoach; a detached tyrant, Wade lets his men do the misdeeds while he draws pictures and moves in after the bloodletting. The savagery of his men washes over him without effect; he is well on his way to nihilism. Their loyalty means nothing: he emotionlessly guns down one of his gang taken hostage by the stagecoach driver, to remove the driver’s advantage – then he guns down the driver…Wade is so arrogant about his power and indifferent about his fate that he calmly rides into the town where the stagecoach was headed, has a drink and uses the fact that he looks exactly like Russell Crowe to seduce a bargirl into bed. 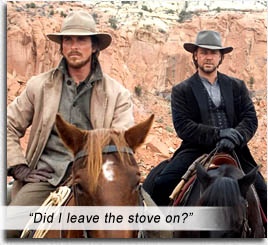 The lives of the outlaw and the rancher intertwine when Evans happens to be in town when Wade is captured, and accepts $200 to join the posse to escort Wade to the station. ($200 was exactly the amount the army paid for his shot-off foot. Analog with the Iraq war and the way America treats its war-wounded: Evans tells how the army gave out money not so the soldiers could walk away from the war recompensed, but so that the government could walk away from the soldiers, disavowing further responsibility.)

Peter Fonda (renowned for his iron horse, here riding a real one) is bounty hunter, Byron McElroy, so tough that after getting shot and having the bullet removed by a veterinarian, is ten minutes later taking Wade into custody and riding out of town with the posse.

3:10 TO YUMA is not about the train trip or the train – it is about the journey of the outlaw and the rancher, by road and by soul.

Remade from the 1957 film of the same name (with Glenn Ford and Van Heflin, from a short story by Elmore Leonard), director James Mangold (from the great COP LAND to the not-so-great WALK THE LINE) elevates the somewhat clichéd 1950’s characters to multi-dimensional, complex people.

Wade is not the sneering black-hat villain of the original, and it is no accident seductive Russell Crowe plays him – charming, principled, educated; in a stopover at Evans’s homestead overnight, Wade easily wins over the rancher’s wife (Gretchen Mol), “I once knew the daughter of a sea captain. She had the greenest eyes I ever saw. Like yours. And I’d stare deep into them. And they’d just change color right in front of me. All the colors of the sea…” (Women love that kind of tongue-dancing, don’t they? It’s too easy.) The only way we can even identify Wade as the “villain” is – ironically – his black hat.

Evans is not the respected, upright do-gooder. The town officials resent him for not surrendering his land, and his family regards him as less than manly. In impassioned desperation, he tells his wife why he needs to endanger his life accompanying the outlaw to the train – redemption: “I’m tired of the way that my boys look at me. I’m tired of the way that you don’t.”

Evans’s son (Logan Lerman), enamored with the outlaw way, tails the posse originally to worship Wade, and ends up finding a new respect for his father in a shocking new ending to the original tale.

Nuance reaches a zenith in the film’s final scenes as Wade admits to Evans that he has been to Yuma prison twice, and escaped twice, and the ghost of a knowing smile flits across Evans’s face… He would win back his respect this day.

The 2007 YUMA ends on a more powerful note than the original and Mangold and new screenwriters, Halsted Welles, Michael Brandt and Derek Haas, create a moral dilemma where Wade and Evans realize they are more like each other than each would dare admit – principled men – and were it not for the circumstances they might well have been friends. A reckoning looms – the gauntlet run through the town, the rancher and the poet villain, the rancher’s boy, and the mad homosexual – and somehow, Wade and Evans both find redemption in the tragedy that unfolds.

In the scenes where Wade and Evans flee through the town, dodging bullets from Wade’s gang and the townsfolk alike, we step outside ourselves and think, “Jesus Christ – it’s Christian Bale and Russell Crowe! – megastars together onscreen!” Amazing how they lost themselves in their characters so completely. A Brit and an Aussie playing two Wild West Americans. How does that grab ya, Yanks?