Most fun you can have not having sex.

Judd Apatow’s THE 40 YEAR OLD VIRGIN has a premise which is utterly ridiculous, a story utterly preposterous and a cast utterly hilarious. 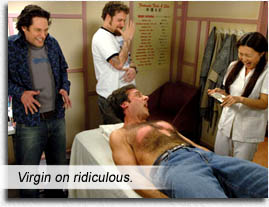 Steve Carell is Andy, the eponymous 40-year-old virgin, enjoying his bachelorhood working at an electronics store by day, painting action figures and playing video games by night. After Andy’s friends discover he is a virgin, in a priceless scene played to the hilt by Carell (where he describes breasts as sandbags and offers fake sexploits on the strength of overhearing other people’s war stories) they do the only thing good friends should do for a virgin buddy – take him out to a nightclub to try and get him laid.

The movie rides on the back of its supporting cast: Paul Rudd, Romany Malco, Seth Rogen, Elizabeth Banks, Jane Lynch – and Gerry Bednob as Mooj, the resident East Indian with the priceless accent and inappropriate crassness. These workmates and buddies are all so eccentric and so game (coupled with Apatow’s laid-back, improv directorial style) that we never quite anticipate what quotable gem they’re gonna spew next. (“You’re putting the pussy on a pedestal, the Pusilaya,” “You framed an Asia poster? How hard did the people at the frame store laugh when you brought this in?” “I will pray for your cock.” “Today’s forecast? Dark and cloudy, and chance of drive-by.”)

Ultimately, THE 40 YEAR OLD VIRGIN fails because it ends up doing what every “romantic comedy” does: lean towards the propaganda that Marriage & Kids is what we’re all aiming towards. Tragedy that Andy gets married to the first chick he plonks. For all the sex he’s gonna get now, he might as well be a 40 year old virgin again.