“Sorry mate. I’m Ray Winstone. If I don’t beat someone up in a movie, I get cranky.”

‘Cause I’m a man, I got my pride,
Don’t need no woman to hurt me inside.
I need love, like any other –
So go on and leave me! Leave me for another!
— “Good Lovin’ Gone Bad,” Bad Company.

I think 44 INCH CHEST is trying to set some kind of record for saying the word “cunt.” That’s why I love it so. It’s British. It’s brutish. It’s cuntish.

Busting at the gray-skied seams with testosterone, 44 INCH CHEST is as blackly humorous and yet as feverishly dramatic as only a cockney London thrasher could be. It’s about honor, loyalty, fidelity and flesh-tearing revenge. It’s about the measure of Manhood. How far would you go to prove your measure?

The formidable Ray Winstone stars as Colin Diamond, a principled, loving husband and father, who has just lost his wife, Liz (Joanne Whalley) to another man. Movie opens with Colin lying seemingly dead on the floor of his self-wrecked house, while Nilsson’s Without You flutters on the soundtrack.

Shattered, almost unable to speak coherently, let alone make life-changing decisions, Colin gathers four friends in a ramshackle rendezvous den to work through his pain – and to decide how to kill the man who stole his wife; the man who is even now locked in a cupboard before them, an armoire, a “44 inch chest,” if you will.

John Hurt, as cockney vicious as a starving pitbull, is cantankerous Old Man Peanut, who just wants blood – and to keep his arse away from suave-gay Meredith, played by Ian McShane with pimp swagger and cynical detachment; Tom Wilkinson is amiable, pragmatic Archie, who still lives with his mum; and Stephen Dillane is Mal, the impetuous muscle, “Let’s kill ‘im now – just give me the word, Colin!” 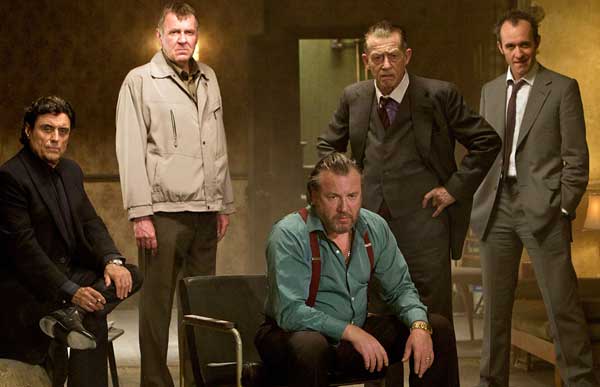 The amazing thing about this movie that reads like a stage play is that none of the characters have backstories! They just appear in this room, driving their brutal dialogue down Tasty Street, and we surmise they are gangsters, but they could very well be just a bunch of schoolmates. The way they stand up for their wronged compatriot could be applied to any profession; it is simply what Real Men would do under the circumstances. They never question why they are there and none of them is impatient to leave for other pressing appointments; we sense instinctively they would follow Colin into hell.

We see the capture of “Loverboy” (Melvil Poupaud) from his waitering day job – Mal headlocking him into a van while distressed patrons look on. They eventually drag him out of the cupboard, bloodied and beaten, and plant him on a chair where they berate him and threaten him, awaiting Colin’s ultimate decision. 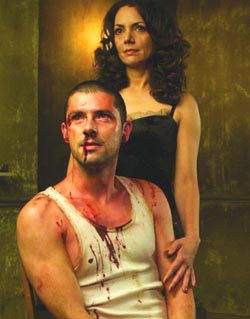 “What you did to me is NOTHING compared to what she does to me psychologically.”

As the story delves via flashback into Colin’s harried night, his wife’s confession and his decidedly unmanly reaction – he bashed the name of her French lover out of her – the bloodlust of the friends is stoked, and we seem to be tilting toward hell after all. Revenge will be sweet.

As the night wears on and Colin enters into fantasy scenes in his head (which include his wife appearing and tending to Loverboy, while his friends size her up in front of him, swapping roles, accusing, bantering, badgering), we realize that each of the friends is a different facet of Colin’s personality (the bellicose, impatient Old Prick, the boastful, cocky Muscle, the stalwart Good Friend and the personality that is completely insular, removed from the world of women – the Gaylord) and that they “complete” him – but not in a good way, as their constant profane, baleful repartee serves to confuse him all the more.

We realize also that Colin seeing his wife touching Loverboy’s wounds so intimately (as Peanut says, “They might as well be doing it right in front of him!”) is his mind trying to purge itself of that image, of the pain of knowing this went on behind his back… forgiveness may just be sweeter.

Eventually, after gripping monologues, morbidly humorous asides, and swearing the likes your drill sergeant wouldn’t believe, with the aid of his friends and his fantasies (some might call it “therapy”) barrel-chested Colin goes further than he has ever gone before, to make a decision that proves the true measure of his manhood…