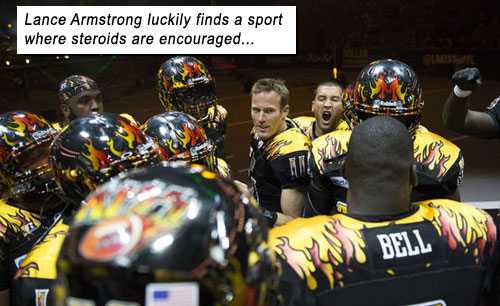 4TH AND LOUD is a quirky combination of all three. If you like even two out of three, you’re in for a treat with this rollicking, bollicking reality series from AMC, that follows KISS founders Gene Simmons and Paul Stanley as they put together the first Los Angeles American Football League team, called – natchelly – “LA KISS.” Yup, KISS goes from playing football stadiums to uh, owning the guys who play football in them.

Now, if you know KISS even minimally, you’ll know it’s not the full band that are forging this team – it’s Gene and Paul’s baby. Their fingerprints are on everything, applying their renowned hands-on, professional, business model approach to all things football, from hiring the coach, the manager, helmet and uniform design (it’s amusing seeing this rock hard football team all wearing black KISS t-shirts), public perception, ticket sales, to the conceptualizing of this series… and of course, auditioning hooers– I mean, strippers– I mean, dancers, uh, cheerleaders (whatever those hooers are called…). Who’s complaining at those half-naked auditions? Stanley pep talks the girls with one of his billion aphorisms: “I’m not looking for the girl next door – I’m looking for the girl I wish was next door.”

Throughout this show, it’s quite obvious Simmons and Stanley are merely transplanting their KISS business acumen into the football idiom, taking every opportunity to rehash their wistful platitudes and worn wisdom from 40 years of being at the forefront of rock. 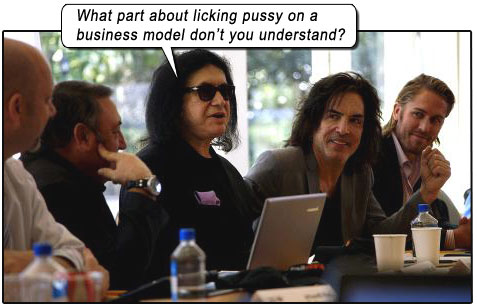 Of course, as with any business venture turned into a TV show, we are not privy to the soporific legal details which would drive us to brain aneurysms, but only see the end results of all the new offices established, the personnel being brought in, homemade pizza at Paul’s place, and Gene and Paul meeting the American Football League executives supposedly for the first time.

It’s an ambitious crossover project, owning a football team made up of outcasts (because apparently 90% of the real talent has already been bought by other teams), and the only reason it will not go the way of the ill-fated KISS wrestling characters is because Gene and Paul have cemented this project’s place in this voyeuristic culture via this reality show.

Not being a football aficionado, I cannot tell you whether anything they’re saying about the League is truth or bullshit; I can’t tell you – nor do I care – about the quality of the players; and I have absolutely no stakes in whether players are cut or make the team. So when the results from one of those foopball hooligan’s neurological tests comes back and advises to cut him from the team, I’m not shedding any tears or alerting social media. All I know is: 4TH AND LOUD contains all the prescribed reality show beats – the premise (rock entrepreneurs initiate a major league football team), the struggle (never been done before), the drama (the guy with the head injury, the two brothers trying to stay on the team, the guy who got time off work to tryout), the human interest (the player who was conceived at a KISS concert by his parents who had met just that night), the talking heads (“I’ve just been knocked down, but it’s about getting back up again!” Where’ve I heard that before?), the action (tinted in Reality Show Stankvision), with the added bonus of Gene and Paul milling through the frame at regular intervals, and the KISS logo up in yo face absolutely freakin’ everywhere.

Being about boring football, I’m sure this first episode is going to be quite similar to the last one in the series; and I’m doubly sure the producers are going to insert a bunch of irrelevant storylines to create drama to keep people watching after they’ve tired of Gene’s and Paul’s schtick and with big men grabbing other big men. No matter. Grand kudos once again to Gene and Paul. Why the hell not own a football team? They’ve got Nothing To Lose.