Another Adam Sandler movie. Another Chick Flick. Another romantic comedy. Another film that Rob Schneider appears in. All in all, another Spectacular Waste Of Time. 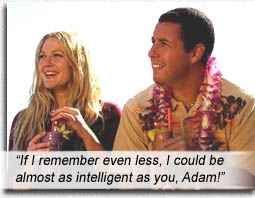 50 FIRST DATES is almost as painful as the brain injury it makes fun of.

Henry (Sandler) is a marine biologist at a SeaWorld in Hawaii. (If you can conceptualize Adam Sandler as a marine biologist, the rest of the outlandish and offensive concepts in the movie should just clack into place.) He’s a philanderer, bedding vacationing women and forgetting them the next day.

Henry falls for Lucy (Drew Barrymore, her lisping out of control from overdosing on coquettishness). Little does he know she suffers from short-term memory dysfunction – when she goes to sleep every night, her memory wipes clean. She retains memories up to the point of the accident that caused her condition.

So when Lucy sees Henry the next day, she doesn’t know him. Who can blame her? Don’t we all try to wipe Adam Sandler out of our minds daily?

Written unthinkingly by George Wing (his first movie) and directed adequately by Peter Segal, the premise of 50 FIRST DATES is a lecher’s wet dream, a sick exploitation. It is not even tragicomic – it is flatly simply a tragedy. You can sophomorically pass it off like a GILLIGAN’S ISLAND episode, but the reality is that this woman has BRAIN DAMAGE! 50 FIRST DATES is about a disabled, fecund chick and the genetically-dysfunctional, horny philanderer trying to screw her. We met Henry as a slut, and nothing in his relations with Lucy indicates he has changed his ways. What has come to light is his pathological eccentricity in pursuing this woman whom he has no possibility of having a future with.

If he was sincerely trying to cure her brain problem, we might excuse his randy “courting” – but he’s simply trying to get into her pants – on the pretense of “noble love.” He wants Lucy to regain her memory to remember HIM, not to improve her quality of life (even though we know that in his warped head, he is considering her memories of him as that very improvement).

Then there is the tragedy that is Sean Astin: from starring roles in three of the most renowned films in moviedom (Peter Jackson’s stunning LORD OF THE RINGS series), here he slips backwards, downwards, almost too comfortably into the filth from whence he came – his Z-character niche – as Lucy’s lisping, ambiguously-masculine brother, Doug. The mesh belly shirt doesn’t help. Or maybe it helps too much.

Doubt that Henry would be so intent on pursuing Lucy if she looked like Sean Astin in the belly shirt.

And Rob Schneider. At least Sandler tries for cred – with reputable roles in SPANGLISH, REIGN OVER ME, PUNCH DRUNK LOVE – but Schneider (playing Henry’s idiot friend here – no surprise) has never chosen one redeeming role in his sloppy-seconds career. A one-trick pony with two broken legs.

This movie should make audiences question the underlying qualities we look for in partners – instead, like SHALLOW HAL before it – it painstakingly weaves a confused, idiotic, contradictory, unfunny tale of humans bereft of human nature.

Henry’s major breakthrough in bedding Lucy is creating a video, which Lucy must watch every morning, outlining her life from her accident to that point in time, including the bilious parts about her falling for Henry.

He gets his wish, gaming it so badass one day (one of the many days he has nothing better to do with his life) that he scores third base. Of course, no one questions the morals or gullibility of a woman who would watch a video, be convinced she is the victim of a memory-loss accident and then fall for the guy on the video who is telling her that she loves him.

Someone responsible for greenlighting this turkey actually had to consider this and say, “Yep, I think the moron populace would belee dat.”

Henry eventually sails off to “find his dream” but realizes Lucy retains some shred of him in her memory, so – talk about “dreamkiller” – he returns to port, to find that Lucy has been made Art Director of a Spastic Institute (is the movie trying to be ironic?), surrounding herself with her drawings of Henry, not understanding why an image of this ugly guy who looks like Adam Sandler is in her mind.

My question: How does she remember she is an Art Director every day? How does she perform her administrative job with no memories of the previous day? What’s this Post-It on my desk? Where did I put my file of symposium attendees? How did I set up this computer program? Are the audience as stupid as we think they are to fall for this?

The movie’s message is noxious and disturbing. There is no badness in Henry – he is not exploiting her or taking advantage of her – it is the opposite: his innocence in wanting to “love” her is a genetic mutation, and that’s the disturbing part, because the movie tells us his behavior is laudable. But there is no evolutionary reason for Henry to try this hard with Lucy when he already has the game to impregnate hundreds of other females; his genes are malfunctioning if he considers these damaged goods a life-partner. The psychology of growing closer to your partner is linked with “shared experiences.” Lucy is never going to share any experiences with Henry, except those of a stranger within a 24-hour period. And even her day-to-day relationship with him is predicated on the fact that every single day she must believe she has lost her memory in the first place.

If she suffered this injury as his wife, we could maybe understand him sticking by her. But what does it say about Henry that he also must re-acclimatize himself with her confusion every morning? What kind of a sick person would get off on doing this every single day?