Because you knew there’d be this slow motion shot.

Ryan Reynolds leads six black-ops vigilantes in removing a dictator and installing his democratic brother in the fictional country of Turgistan (resembling Armenia or Persia, one of those places where the food is great but the religion sucks balls). Not exactly a democratic process though, is it? Oh, that’s right – it’s American democracy.

He’s not empowered by any government, just sick of red tape – as his maudlin narration tells us – so he faked his own death, and faked the death of his chosen espionage teammates, and is fixing the world on his own billionaire dime. And he’s got a mouth on him like Deadpool.

Modern unlistenable source music keeps 6 UNDERGROUND hip and kewl like a James Wan movie, with dialogue trying hard to be Tarantino, gunfights and Flying Movie Sparks plagiarizing John Woo, while slick flying-cam direction with cars flipping over 5 times when they crash with Pretty Orange Explosions like they’re carrying jet fuel just screams Michael Bay—wait, it IS Michael Bay directing. I shoulda guessed when my eyeballs had an aneurysm.

The team call themselves by their numbers, each bringing a special set of skills to the farcical hyper-real proceedings.

6 UNDERGROUND is dying for a sequel. One reveals they have nine missions, this first one is to oust despot Rovach (played with ferocious Middle-Eastern oiliness by Lior Raz) and install Murat (Payman Maadi). We know movie takes place during the shitstain reign of un-american traitor dumbo donald because One quips, “Our president can’t even spell Turgistan!”

It’s eye candy cinematography, brutal stunts, creative car destruction, with some throat-grabbing GoPro free-running scenes across a skyscraper under construction… but all the shooting and running and quipping gets tiring very quickly. You can sustain it in a DEADPOOL movie, where Ryan is the only motormouth, but it’s harder to make it sound convincing when six people all display the same sense of timing and gallows comedy. Also, in diametric opposition to the gagging (“I’m gonna kill him!” “I’m gonna let ya!”) we can do without the introspective narration. 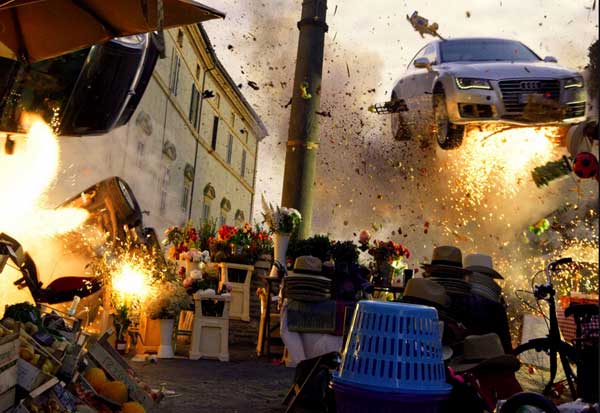 Because in a Michael Bay movie, you’ll believe a car can fly.

For everything excellent – like the visual of a girder slicing across the side of a car as it chases – Bay and writers Paul Wernick and Rhett Reese add a stupidity, like telling one of your team how to arm explosives only when you’re planting them, “Arm them – click to the right” – so they didn’t discuss this any time they went through the plan? Movie can be funny. Really funny. And yet, stupid. Really stupid.

It’s R-rated, so we get casual swearing – yet everyone has sex with their bra and panties on. WHY IS THE MPAA SO GUTLESS? The revolution itself is frankly cringeworthy and embarrassing, as the team throw the dictator out of a chopper and let the villagers beat him to death – just a vicarious fantasy on what we all wish on the white supremacist rapist kidnapper money-launderer dumbo donald.

The redemption ruins the fortitude and ethos of the main character. The concept of his team was that they were expendable professionals who would work for him (I’m sure for a pretty paycheck) anonymously, with no agencies able to track them, because they were ghosts; also ensuring that if they did not know one another, they all had plausible deniability on the identities of each other, should they be captured. When they joined, he gave them all The Speech – they know The Rules. Yet in humanizing them, the movie goes against the very tenets that brought them together.

Movie starts with Deadpool “hating the word family” – and through the mutinies of his soldiers (refusing to leave a man behind, revealing their names against his wishes, having inter-team affairs, etc.) gradually coming to realize that FAMILY GOOD. Someone actually says, “You got a soul man, you should let it out!” And that’s when I kicked over my Netflix account.