In 88 MINUTES, Al Pacino is FBI forensic psychiatrist Jack Gramm, who puts away a serial killer, Jon Forster (crazy-eyed Neal McDonough) and gets a phone call on Forster’s scheduled execution day – a Darth Voice telling him he has 88 minutes left to live. 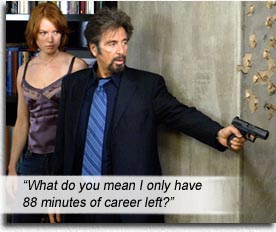 Coincidentally, Pacino’s hair is so big, he looks like he is auditioning for a pussy-metal band from ’88!

Matter of fact, his hair is so poufed, and his goatee so bushy and his complexion so darkly weathered, he looks Punjabi.

As a bevy of sensual women orbit Gramm (Deborah Kara Unger as The Dean, Amy Brenneman as his gay secretary, Alicia Witt as a wide-eyed student with a crush, Leelee Sobieski as a law student, and the most sensual of all, William Forsythe as a doughy cop), he finds himself considering everyone around him a potential suspect to his own impending murder.

It’s not as interesting as it sounds.