Sock It To Me. 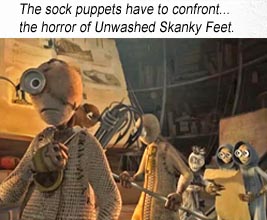 First, allow me to register a complaint: Tim Burton’s name is bandied about this production like it was his to bandy. Even the intriguing trailers stank of advertising Burton. Tim Burton is one of the producers and his name is for marquee strength only. “9” is solely the vision of animator-writer-director genius Shane Acker.

Shane Acker. We’ll hear from this boy in the future.

“9” is his jaw-dropping, wonder-making, magnificent animation sight-spectacular, and an ambitious stab at conceptual darkness. Gone awry. The concept is lost amidst this action movie that didn’t need to be.

A tiny hessian puppet named 9 awakens in a blasted cityscape and wonders at his existence. He meets others of his kind, all with numbered names, and they embark on a journey of self-discovery while facing monstrous mechabeasts with unknown motivations and fatal inclinations.

The animation in “9” is so unique and the story so strange that it takes viewing and listening to the Audio Commentary to understand the fullness of the world that Shane Acker created. But Acker attempts too much conceptualization and it gets lost. To relate to the motivations of the burlap sock puppets, they must be anthropomorphized, which turns them into little dolls. Which they aren’t.

Flashbacks via old newsreels reveal a Terminator-like past, where a useful artificial-intelligence machine was put to evil use by “The Chancellor” (no prizes for guessing he’s a Hitler allegory), whereby it gained evil sentience, created more of itself and wiped out mankind.

The machine is the villain – although I don’t like the way “science” is offhandedly blamed as the cause of the evil machine, as if science is a religion or a tangible thing. Science is a methodology.

Number 1 (voiced by Christopher Plummer) is especially aggravating in his denunciations of science-as-religion; an analog for Dr. Cornelius from PLANET OF THE APES, he is a quivering would-be leader who must create the perception of peril so that others will look to him for ad hoc leadership (much like Dick Cheney).

Number 2 is Martin Landau, old and inquisitive, who meets a brutal end. Numbers 3 and 4 are mute tabulators of history. One-eyed Number 5 is John C. Reilly. Stripey Number 6 is Crispin Glover. Number 7 is pretty hot, even without boobies, voiced by Jennifer Connelly (who is a 9 in real life). Number 8 (Fred Tatasciore) looks like Oogie Boogie from THE NIGHTMARE BEFORE CHRISTMAS. And Number 9 is Elijah Wood.

Giving voices to the rag dolls demeans the production. The Original 2005 Short for 9 (on the DVD) features a mute 9 and 5 in a well-structured little tale with great payoffs; it is alien, bizarre, excellent. The feature film is homogenized for family entertainment – and with Elijah Wood as the star voice, well, it’s just too comfortable to be darkly enjoyable.

A lot of Running and Screaming just to end on a very mundane preachy note. 9’s last words – when he is left with a nuclear family of himself, sexy 7 and the raggie twins, 3 and 4 – are “This is our world now. It’s what we make of it.”

More fun than losing a sock in the dryer.