We’ll never know The Truth about 9/11. And this shoddy movie proves it. 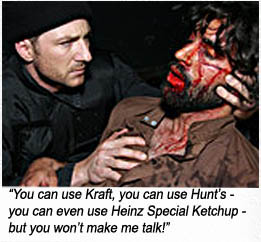 I recently watched a YouTube report claiming there were no planes involved in the Twin Towers’ destruction; that all the news programs were supposedly provided with same-angle shots of the Towers from a mysterious source (probably the gubmint?), and in that provided footage CGI planes were substituted for real-life MISSILES which actually hit the towers…

Though I am not a Wacko Conspiracy Theorist per se, I am still not sure myself whether actual planes hit anything that day (the Towers, the Shanksville field, the Pentagon) – because there is no plane wreckage available. (And what about those infamous “black boxes”? None recovered.)

A million other theories abound, all of them courting a droplet of Truth awash in an ocean of speculation. But you’ll drown in malarkey before you find anything truthful or worth speculating in THE 9/11 COMMISSION REPORT, a no-budget movie that is trying to close the barn door after all the horses and jihadists have escaped.

Writer-director Leigh Scott is obviously a concerned American citizen who wanted to enlighten audiences on what the 560-page report might reveal. It would help if his movie had actors, instead of a guy who looks like David Duchovny, a chick who looks like Gina Gershon, a guy who thinks he’s Russell Crowe and another guy who I’m pretty sure is trying hard to be Sean Bean. It would help if his camera operator didn’t have Parkinson’s; if the lighting director wasn’t trying to save on electricity; if his editor didn’t have Attention Deficit Disorder, or if the soundtrack wasn’t some tuneless new world esoterica; and the looping should have probably been inserted when people were actually moving their mouths.

We can’t even call this propaganda. It’s too funny. And by funny, I mean unwatchable.

You can’t squeeze an issue this complex into a two-hour film, but Leigh Scott tries anyway, including all those sexy catch-phrases we’ve grown to love like tender nails into our eyeballs: bin Laden’s intent to attack, purchasing weapons from Somalia, non-aggression agreement with Iraq, Mussawi attending flight school, weapons of mass destruction…

The problem is: we know it’s all retrospect, so every discussion the concerned intelligence operatives have with each other reeks of fake hindsight crammed into a neat conversation. Like contrived reverse engineering, everything pertinent is mentioned succinctly so that we can shake our heads in wonder at how incompetently all these branches of government screwed up.

There’s a ludicrous interrogation scene with a lubricious bimbo beating up on a guy with tomato sauce on his face. Now – that would be considered torture if most guys didn’t consider it a turn-on.

The tagline is: “What if the attack could have been stopped?” By this movie’s account – and, we presume, according to the Commission Report – the CIA and other covert agencies were all set to capture bin Laden. And didn’t. Everyone involved with the “terrorism” reports (you mean you actually read those reports?) is so concerned, we just want to slap them for their bad acting.

Yet the whole story goes so much deeper than the banal soundbytes the negligent Ku Bush Klan foisted on the American people after 9/11. We now know that even capturing bin Laden before the 9/11 attack would not have changed or achieved anything – the wheels were in motion with or without that Taliban figurehead whose involvement was the possible figment of someone’s fevered imagination to unite America against a common enemy. Contrary to popular belief “they” didn’t “attack us.” As Ron Paul tried to elucidate, it was a case of Middle Eastern blowback – “they” were so sick of America planting their infidel feet “over there” that they brought the war “over here.” So though George W. Death likes to tout the nonsensical, “We’re fighting them over there so we won’t have to fight them over here” palliation, in reality “Because we’re Over There, the fight has been brought Over Here.”

And then the scum who called himself president used the attacks brought about by his negligence as a political hammer against his own dumbed-down countryfolk to score a second term, shred the American Constitution and take America into a Fake War on the basis of a lie (WMD), with a country that had nothing to do with the 9/11 attacks. Strangely enough, this movie never treads near the Ku Bush Klan, offering no opinion or judgment, Leigh Scott wanting to remain neutral. Tell that to the raped and pillaged hundreds of thousands in the Fake War on Terror in Iraq.

Out of pure coincidence, I realized I was watching this DVD while wearing my “Bush Lied. Thousands Died.” t-shirt. I’ll put it to good use wiping up my brownies…

No one who reads this article will feel compelled to watch this movie… but everyone is interested in this twisted conspiratorial topic – whether there’s a “conspiracy” or not.

THE CONSPIRACY IS THAT THERE *IS* NO CONSPIRACY!
If every paranoid person on Earth was so sure someone was after them, how come only non-paranoid people disappear? Uh-oh, I just made brownies in my little greenies…

– Poffy (hiding out somewhere in the Luou Mountains)