I wrote in ANY WHICH WAY YOU CAN, “There’s nothing deep here; crack a beer, strip down to your wife-beater and just enjoy it.” 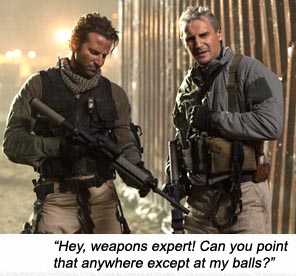 Ditto THE A-TEAM. More like the C+ team. The only ‘A’ in this movie is for Audacity. Or Ass – Jessica Biel’s.

From the 80’s TV series of the same name, with the same characters exhibiting all the same lunatic foibles, same theme music, same child-molester van (which is annihilated quickly – too 80’s! – in favor of Hummers and other such army-ware), same faceless enemy soldiers who can’t aim, and the same big explosions to keep 12-year-olds happy. The only thing different is the 12-year-old audience. Suckers born every minute…

Liam Neeson is Hannibal (saucy team leader and cigar-chomping insurrectionist), Bradley Cooper is Face (womanizer womanizer womanizer), Quinton ‘Rampage’ Jackson is B.A. Baracus, doing a tame Mr. T (If you were really that tough, would you go around asking people to call you “Rampage”? Seriously, how long’s that gonna last, mama’s boy? I pity the fool!), and Sharlto Copley is clinically insane pilot Murdock (nice to see him outside DISTRICT 9).

Jessica Biel plants her pear buttocks firmly in the role of The Misty Military Chick with the ass of steel who is trying to bring down Hannibal’s Alpha Team because she was once salad-tossed by Face. And loved it.

Patrick Wilson is the sinister CIA double-crosser, Mr. Lynch. Gerald McRaney plays old General Morrison who gives out A-Orders to Hannibal’s A-Team and covers his own A by pretending to be an A-rab with a fake beard. Hey, I didn’t write this feeble story – Brian Bloom and Skip Woods are the A-holes.

After we meet the team in the audacious opening action sequence, we flashforward “eight years later after 80 successful missions,” and we are told the story is set during the “Final American withdrawal from Iraq.” (Oh, so it must be in the distant future, like 2057 or something; because they can’t possibly mean the August 2010 Pretend Withdrawal, leaving 50,000 American troops still in Iraq, or these inculcated lunkheads completely misapprehend the word “final”…)

Co-written and directed by Joe Carnahan (SMOKIN’ ACES) like he forgot to take his Ritalin, the A-Team are given covert orders by Lynch and Morrison to retrieve counterfeiting plates from some Iraqis who are printing American money. This was the funniest joke of all: why do Iraqis have to print counterfeit American money when the American government is in collusion with them to “lose” pallets of real American money in Iraq?

So through a contrived storyline that rockets ahead without any thought, the A-Team are framed, court-martialed, jailed and escape (all within the time it takes to diagnose Joe Carnahan with attention deficit hyperactivity disorder), so that they can be “outlaws” and make chicks wetter than if they were just Good Christian Soldiers.

Then they do something else without thought: they go after those McGuffin counterfeit plates. Hannibal says it’s to clear their names – but if the whole op was covert to begin with, he would have to prove in a military court that their original orders existed in the first place, in order to then prove they were double-crossed; then he would need special dispensation to make it legal to escape jail in order to carry out those orders that no one wrote down and that everyone denies having given; then he would have to… well, you get the picture…

And the American government would probably throw him back in jail anyway for returning the plates to them: “You eeediot! We gave them those plates so they could print the money themselves and we could stop pretending to ‘lose pallets’ and ‘fund both sides’ and ‘sell weapons to our enemies’!”…

Nice to see Bradley Cooper and his square-bare chest making A-List gravy in this B-movie; nice to see the talented Sharlto Copley has reverted back to human form; nice to see Liam Neeson as anyone besides Qui-Gon Jinn. Nice to see bad guys still can’t aim (at one point, a bunch of baddies are ten feet away from an escaping helicopter, firing at it point-blank, and all they hit is the air); nice to see villains still talk too much when they can just kill the good guy with one trigger-squeeze.

The television A-TEAM was known for its cheap explosive stunts (and bad guys climbing out of exploded vehicles to prove they were not dead to the kids in the TV audience), while this A-TEAM continues the legacy of outlandish stunts with computer graphics instead of crash-test dummies. The parachuting tank is definitely the feature scene here, as the Team plummet to Earth in a tank and Face continues firing the turret gun at attacking drones, to a) try to dispense the drones and b) redirect the tank’s fall towards a body of water.  But the CGI finale at the shipyard container compound has the same problem as the rest of the action sequences – it looks faker than Heidi Montag’s humanity.

Hunted by the American government, the A-Team remain at large as outlaws, taking on those dirty mercenary jobs that we’ll only ever see in a sequel if they find the funding. And an even stupider script.