ABRAHAM LINCOLN VAMPIRE HUNTER is a film about the blood-drinking creatures of the night, the hellish, undead demon-spawn that crave the annihilation of the human species – that’s right, it’s about Republicans. 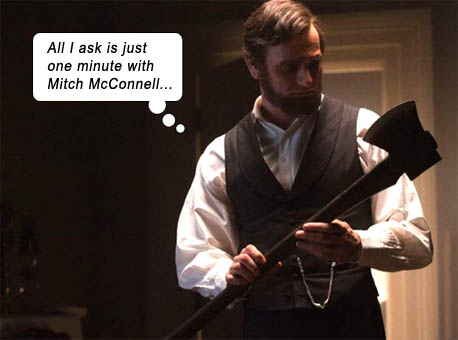 Ironic then, that the hunter of these bloodsuckers is none other than the most famous Republican, Abraham Lincoln – fighting to free the world of slaves. And vampires. Long before he became the 16th President of the United States, and before he grew that, ahem, Abraham Lincoln beard, we meet Lincoln as a dashing young man (Benjamin Walker, looking defiantly like a young Liam Neeson – until we realize he played the young Neeson in KINSEY!), hunting his mother’s killer, whom he discovers is a vampire.

Lincoln’s mentor is Henry Sturges (the masterful Dominic Cooper), a veteran vampire slayer who trains Lincoln in the art of being an axe-man. And not in the manner of Yngwie Malmsteen. Due to axes instead of guns, the hand-to-hand battles become balletic, after the crash-slomo stylings of Zack Snyder’s 300.

By day, Lincoln clerks in a general store for his boss, Mr. Speed (Jimmi Simpson, named after the KISS song) and studies law (“something to fall back on”), and by night he does Henry’s bidding, wiping out the insidious spread of the undead hiding in plain sight as pharmacists, innkeepers, pastors, blacksmiths, and Joe Lieberman. 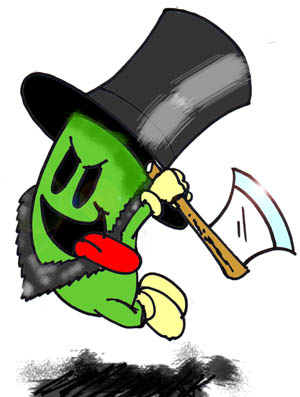 Henry tells Lincoln, “It falls to us, Abraham – the hunters – to keep the balance; to ensure that this remains a nation of men – and not monsters!” Ironic that modern Republicans are doing exactly the opposite – fighting with fang and claw to wipe out any trace of humanity and rule the nation like the monsters they are. (‘Monsters’? Isn’t that a bit harsh? You decide: Republicans deny healthcare to their own constituents, cut funding for education, hospitals, infrastructure, food stamps, block votes for minorities, despoil the environment, crave the death penalty… I think “monsters’ is too tame a word for such soulless pricks.)

Alan Tudyk is a bitter politician, whose fiancée would become Lincoln’s wife, Mary Todd  (Mary Elizabeth Winstead). Sally Field (who plays Lincoln’s wife in Spielberg’s LINCOLN, 2012) would pule about Mary being a strong woman, while never giving us an indication of that strength, except her acerbic tongue. Winstead, on the other hand, brings the mojo, what with her father being John McClane. Anthony Mackie is Lincoln’s ex-slave pal. Rufus Sewell is a king vampire, who spins his own subjective morality very convincingly. When chided by Abraham for keeping slaves, he counters, “Men have enslaved each other since they invented gods to forgive them for doing it.” Jesus agrees. And Republicans.

The look of the film is lavish, the action, deliriously kinetic; this is not some throwaway Lincoln B-movie. We find ourselves wondering how the film succeeds with its dual tone: it is firstly couched as a dark thriller, but the fact that the protagonist is Abraham Lincoln who is slaying vampires makes it a comedy of sorts with its core premise.

Director Timur Bekmambetov (WANTED, 2008) has taken Seth Grahame-Smith’s screenplay and brought it to raging life in muted ochres that leach sour gray whenever vampires are onscreen. And being a movie about Lincoln, it is filled with quaint platitudes: “Plant your feet and stand firm – the only question is where to put your feet.” And of course, the undercurrent of the quest for Freedom. Sewell the Vampire: “All I ever wanted is to see my kind granted their rightful place.” Hah! Like every downtrodden race, he seeks emancipation! After all, who wants to be treated like a 2nd-class citizen? All he wants, by god, are his devil-given civil rights…

Since time immemorial, we’ve seen fights atop moving vehicles, from stagecoaches to moving trains – here, we see a creative fight in the middle of a horse stampede. At this point, it gets non-believable. No, not because they jump from running horse to horse as if they were cars, not because one guy hangs off a horse that runs along the lip of a CGI cliff, not because they can get hit by a stampeding horse and then get up and continue the chase without any broken limbs (we signed up for this kind of supernatural silliness when we bought a ticket to a film called ABRAHAM LINCOLN VAMPIRE HUNTER); but when a vampire can throw a running horse at Lincoln and then cannot sink his fangs into Lincoln’s neck because Lincoln is holding him off, that’s just STOOPID! Didn’t this guy just throw a horse at Lincoln? Exactly how strong IS the Congressman from Illinois?

Is it any surprise that during the American Civil War, the vampires fight on the side of the south? Precipitating President Lincoln requisitioning all the silver in the north to melt into weapons, because silver is deadly to vampires ever since Judas was paid to betray Jesus. Don’t ask me how the two connect – but it must be true because it’s in all the history books.

Movie ends with Lincoln giving his Gettysburg Address and riding off to the theater. Just before he leaves, his vampire friend asks him, “Let me make you immortal, so that we can fight evil side by side for eternity.” And we wonder: is it a giggle, is it disrespectful, is it fact? Republicans can’t tell. The way they cannot tell they are not the party of Lincoln any more.

Pay especial attention to the outro graphics under the credits, where drips of blood trace out these United States of America.

Unfortunately, despite all the efforts of Lincoln, young Liam Neeson and Daniel Day-Lewis, the vampires are back in power again – James Inhofe, Louie Gohmert, Michele Bachmann, John Kyl, John McCain and his bumboy Lindsey Graham, Ted Cruz, Mitten Romney, David Koch, Sheldon Adelson, Joe Lieberman (was there ever any doubt this traitorous, face-worn succubus was a vampire?) – all trying to suck the human race dry…

Is Abraham Lincoln gonna have to cut a bitch?