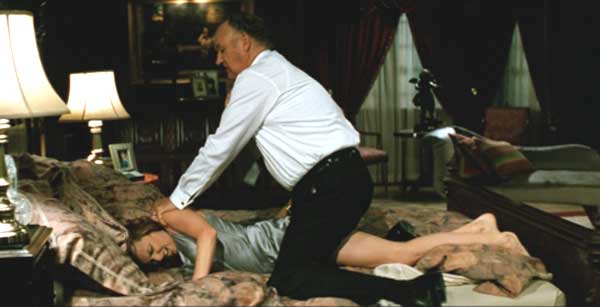 Every president rapes. Only one is an Oscar winner.

Thieves in the Temple.

In ABSOLUTE POWER, Clint Eastwood is super thief Luther Whitney, robbing a mansion when he is interrupted by two lovers entering the room. Luther takes cover and witnesses rough foreplay, until the man gets too rough for the woman and she retaliates by trying to stab him.

The man, pinned on the floor, cries, “Help! Help!” and two Secret Service men shoot the woman (the glorious Melora Hardin) fatally from behind.

The man is the American President (Gene Hackman). Judy Davis (who always looks like she never got enough sleep) is Secretary of State, and as she and her Secret Service men clean the room, Luther makes a break for it. The Secret Service men (Dennis Haysbert and Scott Glenn) pursue him, but he eludes them. With a secret that could topple the presidency.

Absolute Power Corrupts Absolutely. ABSOLUTE POWER does not give us any ambiguity on how the American President is corrupt – he’s pretty much been handed the White House by his billionaire benefactor, Walter Sullivan (E.G. Marshall), the old man whose wife he just killed. And Hackman imbues the role with every ounce of contempt and duplicity that we know the actual President has for the American people whom he should be serving.

The Prince song Thieves in the Temple has nothing to do with politics, but these lines could very well be applied to The White House: “…Don’t care where they kick / Just as long as they hurt you / There are thieves in the temple tonight.” And we begin to realize that the actual “thieves” in our temples are not those simple robbers in our houses who steal money and jewels – the thieves are in the highest temples of power, CREATING the social disparities that CAUSE the robbers in our houses. 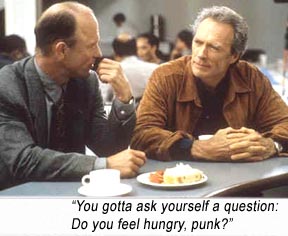 Ed Harris is police detective Seth Frank, misdirected off the murder scent by the cover up of the White House criminals; hot on the trail of Luther, but unable to prove anything. Besides, he’s hot on the TAIL of Luther’s estranged daughter Kate (Laura Linney), who is a trial lawyer, so he is stuck between a rock (the presidency responsible for murder – heaven forbid!) and a hard place (his pants). Once again demonstrating how real criminals (those in positions of sociological power) misdirect blame downwards. The thief becomes the focus of derision rather than the actual murderers.

While attempting to capture Luther, Scott Glenn and Ed Harris are paired up; though they are strangers from two rival departments at odds with each other, there is a nagging familiarity about them being onscreen together…Of course! These guys were astronaut pals in the Mercury 7 program in THE RIGHT STUFF!

On the president’s orders, the Secret Service go after Luther and his daughter. But Luther is there! In one of the most satisfying scenes of mercilessness Eastwood has ever performed: Secret Serviceman Colin (Haysbert) sneaks up on Kate in a hospital bed, with a lethal injection. From behind, Luther grabs Colin, puts a needle to his neck, warning him that a small dose will fry his brain, adding, “You went after my little girl – and that’s entirely unacceptable!” (From that day, I began using the phrase “Entirely Unacceptable” to people who let me down and you have no idea how powerful an indictment it is!). Colin pleads with Luther, “Mercy.” Luther replies, “I’m fresh out,” and pushes the needle’s plunger. (Stabbing those who let you down in the neck with a hypodermic needle is also pretty satisfying, but, like Dave Chappelle, I plead The Fif on that one.)

ABSOLUTE POWER is not “political” and makes no sociological statements. If anything, it underscores how the American president should be answerable for the crimes he commits – and we should already know that! In a more subtle way than usual, ABSOLUTE POWER shows us that Clint still has The Right Stuff. Though his character is a thief, he manages to retain the avenger idiom of his best anti-heroes and rights a wrong quite decisively. And takes down the President of the United States.