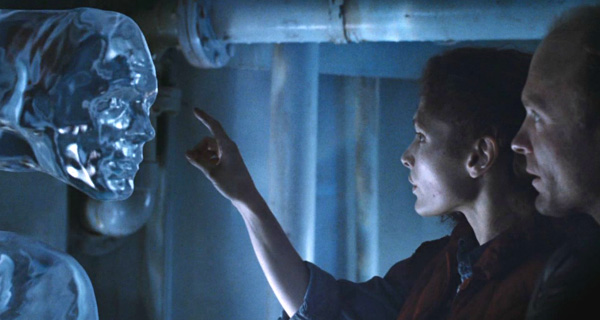 “Greetings, humans! Take me to your Department Of Water And Mermaids…”

He who fights with monsters should look to it that he himself does not become a monster. And when you gaze long into an abyss the abyss also gazes into you.
— Friedrich Nietzsche, Beyond Good and Evil, Aphorism 146 (1886).

James Cameron‘s parable about humans in an alien environment (at the bottom of the sea) close-encountering aliens in a human environment (here on Earth).

An American nuclear submarine crashes and sinks into THE ABYSS of the title, and civilian underwater oil-riggers, led by Bud Brigman (Ed Harris), are called in to help a Navy SEAL team recover it.

For such a long movie (some versions are 3 hours long), with practically nothing happening, writer-director Cameron echoes Ridley Scott’s ALIEN and Wolfgang Petersen’s DAS BOOT in all the best ways, charging THE ABYSS with claustrophobic suspense, primal fears of drowning and isolation, and human conflict military and personal. And neon-pulsing sky-blue aliens!

The Nietzsche quote is quite literal here, as Bud’s underwater team gaze at the bottomless drop they are perched over, and from below, presences gaze back at them.

Mary Elizabeth Mastrantonio is an expert undersea tech and Bud’s estranged wife Lindsey, brought into the story to cause conflict, we presume (ex-wives are fatal even in spacious places, try living with them in a sardine-sized biosphere); the rest of the crew are redneck C-Listers with quirky foibles. Michael Biehn is Navy SEAL Coffey, who seems to have ingested too much of his namesake, as his hands are constantly shaking and he suffers Charlie Manson-sized bouts of paranoia. 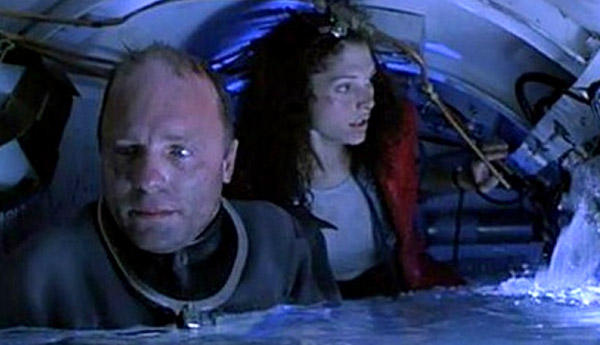 “Sheesh! When they said marriage was like being trapped in a claustrophobic submarine
and eventually drowning – they weren’t kidding!”

The brilliance of this movie is its relaxed pacing. After the opening’s harrowing submarine sinking, when Bud’s crew and the SEALs investigate the sub, it is one of those excellent naturalistic sequences where the crew seems to be doing nothing even mildly interesting – recon and salvage with a lot of protocol dialogue – that is yet somehow compelling. In the backs of our brains, an undercurrent of claustrophobia and imminent terror of being under so much water. And when the aliens do appear, it is not in thunderous orchestral stabs or as monumental godlike beings; their presence is subtle and unrushed, not hostile in the traditional laser-wielding ways. They float around like transparent jellyfish and minimally aid the undersea rig, and when Lindsey encounters one, she can’t quite convey to the crew that she is not hallucinating.

The alien water-column effects are the precursor to the startling, revolutionary “liquid-metal” effects Cameron would use in TERMINATOR 2: JUDGMENT DAY (1991).

Note that Cameron just made a bombastic alien film, the sequel to ALIEN, ALIENS (1986), diametrically opposite to Ridley Scott’s controlled masterpiece (yet a great film nonetheless); here, Cameron diametrically opposes himself in ALIENS by taking the Spielberg route with his realistic approach, human interactions and harmonious, amorphous extraterrestrials.

But humans never change, do they? Ever the same old weak-minded species…

After recovering a nuclear bomb from the crashed sub, Coffey goes bananas when the aliens make their presence known, and wants to blow them up, being a military guy an’ all. Not enough PTSD training? Or not enough chances to indiscriminately murder people, since no major wars were being prosecuted in 1989.

Makes us hope we never have to depend on a military guy for ANYTHING. Despite all the propaganda trying to humanize the military as aid for disaster relief, the only thing we can really depend on them for is indiscriminate murder. That’s how we WANT them though; they’re a special kind of drogue that every established ruling party needs. The “humanity” HAS to be leached out of them so they can perform their indiscriminate murdering jobs efficiently, without questioning amoral orders or immoral politicians. Of course, this is where the “He who fights with monsters…” quote applies, although it’s unfortunate that most lower-ranking military personnel are too incognizant to comprehend it.

Now, after all the hotheaded, paranoid military guys have vented their insults, misinterpreting my above sociology as derogation, onward… 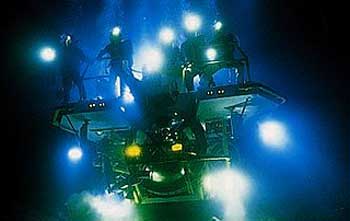 Close Encounters Of The Moist Kind.

The aliens eventually abduct (for want of a better word without the baggage of anal-probing) Bud, and take him to their undersea kingdom, where they communicate to him the age-old message of Mankind being a threat to itself. And they raise tsunamis on the coasts of major cities, threatening to destroy Mankind for being so destructive. Cough–THE DAY THE EARTH STOOD STILL.

And I’m not buying it.

Besides the obvious hypocritical paradox of threatening destruction to a species for being destructive, I refuse to fall into that anthropocentric belief that extraterrestrials would have a stake in human affairs. What is their motivation? Would humans care in the least if an ant colony was destroying itself? No – unless the ants had something humans wanted. What have humans got to offer aliens? Nothing. We are ants to a race that can traverse interstellar distances. And what is the point in trying to “save” humans by threatening our destruction? If we call your alien bluff, you destroy us anyway! Let us do it ourselves and save your alien resources for building pyramids and anal-probing and such.

Face it, fellow idiot humans: all messages of Mankind being its own destruction is really a human message to other humans.

Those who don’t like primal drowning scenes should stay away from THE ABYSS. There is a scene where Bud puts on a helmet that is filled with a modified liquid that he can extract oxygen from (apparently a real scientific development) – in essence, breathing in water – yet though we see him doing it, we still want to gag on our uvulas. And there is a scary, poignant, desperate drowning scene, where Bud pulls Lindsey through water like drying concrete, making us hold our breaths in sympathy until we turn blue.

Cutting the film, cutting the message.
The venal studio system that even mega-directors like James Cameron must kowtow to forced him to delete the climactic tidal wave scenes in the original theatrical release of THE ABYSS, to trim the film under 2.5 hours. I’ve never seen the movie without these integral scenes so I can’t imagine how pointless it might read.

The very message of human greed, pettiness and venality that THE ABYSS expounds is exhibited in its forced shortened running time: Studio heads HATE films longer than 90 minutes, not for aesthetic or moral reasons – purely because a longer-running film cannot be run at a cinema complex as many times as a shorter-running film, therefore making less money. Insulting their very audiences’ attention spans is a by-product of the fact that they NEVER take into account that a good film will generate income no matter how long it is.