When Over-The-Top is Under-Achieving.

Like a ballistic missile launched from the irreverent camp of IN LIVING COLOR, (of which he was the odd-white-man-out alumnus), Jim Carrey‘s second-ever leading role as the eponymous ACE VENTURA: PET DETECTIVE remains a watershed performance of mega-ultra-outré singularity. 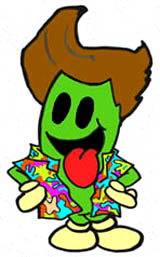 The plot of the singularly incongruous Pet Detective (roving rampant amidst the real police department’s investigations) recovering a kidnapped dolphin mascot for the Miami Dolphins football team is almost incidental, and made almost irrelevant, as scenery-chewing is taken to oxygen-depleting levels whenever Ace Ventura (Carrey) inhabits more than one-tenth of the screen frame, in a frenetic story that takes Ace from football fields to Southern backwaters, from infiltrating a mental asylum to swimming with sharks. Tom Shadyac‘s straightforward direction gives Carrey the space to run amok like a force of nature that few comedians before him have commanded (notably, early Jerry Lewis).

Courteney Cox in one of her few watchable roles as the football team’s liaison who hires Ace; Tone Loc as a sympathetic cop, whose tolerance for Ace’s parallel investigating extend to allowing Ace’s backside to talk to him; John Capodice as the gruff cop who disdains Ace’s pet detecting skills to the point of squishing a cockroach in front of him – and paying the price!; Sean Young as an iron maiden Lieutenant heading the dolphin investigation, with a six-inch secret in her panties; and Miami Dolphins quarterback Dan Marino playing himself.

But this movie, this mayhem, this moment – is owned and pwned by Jim Carrey. A smackdown hurricane, a body in perpetual motion, a whirling dervish as performance art.

The beauty of the Ace character is that it is so one-dimensional. And loving it! Ace was a principled, fun-loving, almost surreal personality, who knew his strengths and liked himself. Writers Jack Bernstein, Shadyac and Carrey don’t try to imbue this guy with any conflict; they keep it straight ahead Just For Laughs, in sudden left-turns, like the woman who kneels before him so quickly and vigorously that he must grab the roof beam for support, like catching a bullet in his teeth, or escaping an encounter with a man-eating shark with his clothes shredded and his hairstyle intact.

Carrey’s later characters (THE CABLE GUY, ME, MYSELF AND IRENE, LIAR LIAR) would be warring with themselves to be better persons; there was an outside factor tempering the simplicity of the character. Even the supposedly simplistic character in DUMB AND DUMBER was trying to better himself against the demons of his ignorance. And THE TRUMAN SHOW insidiously sailed these aspects into dark territory brilliantly.

That’s why Ace is such an enjoyable character – rarely do we see someone so at peace with themselves, so socially inept and politically incorrect, yet never apologizing or aiming at some censor’s stupid idea of “redemption.”

Sophisticates and art-house elitists whine over Carrey’s Method, but his execution is unquestionably adept in a world gone mediocre, and engineered for maximum impact in a world that lauds minimum finesse. Compared to the exhausted shtick of the Adam Sandlers and Pauly Shores, ACE VENTURA PET DETECTIVE is a Bergman Festival.