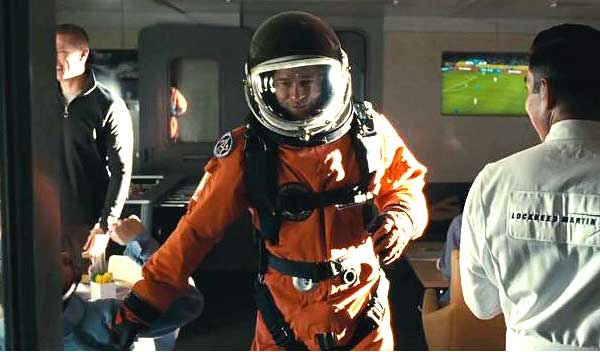 In AD ASTRA, Brad Pitt flexes all his other muscles.

Brad Pitt saves the world (like WORLD WAR Z) while pondering the meaning of existence (like Tyler Durden), in transit from the Moon to Neptune (like we didn’t already know Brad Pitt was a heavenly body).

AD ASTRA (“To The Stars”) turns an astronaut’s mission to save the Earth into a man’s search for his creator – no, not “God,” you idiots! – his father, while asking the big questions about Life, the Universe and Everything.

Roy McBride (Pitt) is such a gifted astronaut, his heart rate never rises above 80, even whilst plummeting from a space station in low Earth orbit after an explosion rattles him loose on his EVA. This opening scene establishes two things: one, the calmness of the lead character, with his measured breaths in the atmosphere suit as debris races him to the ground at terminal velocity, and two, the special effects muscle that AD ASTRA wields in an almost cavalier manner.

The same force that caused the destruction of the space station is raining down electromagnetic havoc around the world. Detecting the source from Neptune’s orbit, SpaceCom suspects Roy’s father Clifford (Tommy Lee Jones) as the cause: Clifford turned “to the stars” for intelligent life and the promise of progress, and abandoned the Earth, for which he held only derision; now his contempt manifests itself as EMPs originating from his last coordinates. Roy is sent on a savior mission – to save his father from dementia or to save the Earth by stopping his father. “My dad sacrificed himself for the search for extra-terrestrial intelligence. I was 16 when he left, 29 when he disappeared.” (To see the resemblance between Brad and Tommy, look no further than Pitt’s other movie this year, ONCE UPON A TIME IN HOLLYWOOD, where his face is as runneled as Tommy’s!)

Has Neptune ever been the focus of an astronomy-based movie before? Like a silent heroine peeking from behind Jupiter in her corner of the Solar System, radiant in all her azure glory—ah, now we know why they sent Brad Pitt…

Suddenly – Donald Sutherland! Nice to see he’s still healthy enough to make the trip to the Moon—Are we sure this isn’t a sequel to SPACE COWBOYS? I mean, the last time we saw Donald and Tommy, they were lassoing a Russian space station, and Tommy was riding that bucking nuclear bronco to the Moon. Maybe he didn’t stop there… 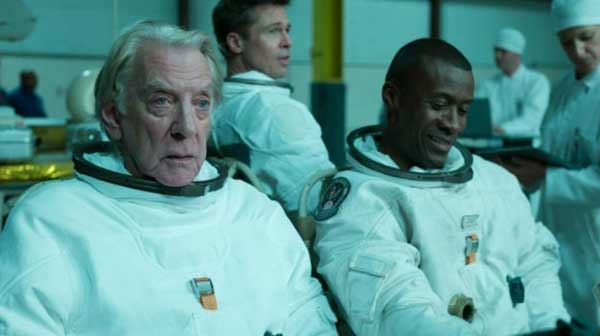 The look of a man who forgot to take his pills this morning.

The Moon here is a vacation hotspot. Roy narrates in his calm, dejected drone, how Clifford might have disdained the Moon colony as a tourist farce, “If my dad could see this now, he’d tear it all down!”

Car chase on the moon! We know it’s a device to get the Millennials wet (and we’re not exactly sure who is after Roy, or why, or the feasibility of firing laser guns at each other in this grounded science fiction thriller), but we have to admit, the astonishing cinematography (by Hoyte Van Hoytema – INTERSTELLAR, DUNKIRK), the physics in this low-gravity scenario, and the sheer audacity of the sequence, leaves us breathless. And on the Moon, that’s literal!

The seamless CGI in AD ASTRA only enhances our immersion into the story, rather than intrudes for the sake of eye-strain (like any Marvel or TRANSFORMERS debacle). When they turn to look at Earth in the Moon’s sky, or when Roy emerges from the pool under the rocket’s gimbals, or when he is floating above Neptune’s rings, it is subtle yet stunning visual gluttony.

Roy’s emotional state is monitored constantly, his mantra, “I am ready to do the job to the best of my abilities” (much like Andrea Riseborough in OBLIVION reciting, “We are an effective team,” almost like she is trying to convince herself of it).

From the Moon colony, a direct comm line to Neptune, Roy clinically calling on Clifford to respond. After days of nothing, Roy resorts to a heartfelt plea. And SpaceCom fires him: “Your personal connection made you unsuitable.” I thought that was the point – to use Roy’s connection to his father, yet when he actually “connects,” he is discarded.

Like any great democracy/bureaucracy, SpaceCom decides to wipe the slate clean, ordering Roy back to Earth, and targeting a nuke-laden ship to Neptune. Undeterred in his quest for dad, Roy sneaks onboard the Neptune ship.

The technology is not light-speed travel, yet it’s considerably faster than we have now: 19 days to Mars, 79 to Neptune! Roy narrates the zero-G is affecting him mentally and physically – but how can he be going crazy if after 2 months he can retain that sweet 3-day growth?

AD ASTRA plants us so firmly in the astronaut’s seat that it becomes truly terrifying on an existential level. This is not some space “fantasy,” fooling gullible fans into thinking it is based in science (STAR TREK, STAR WARS, STARCRASH) – this is real-world science hitting us in the chest: physics so unbreakable and unforgiving, space so black and remorseless, machines so fragile and futile, it takes all our will not to break down in gloom. So when Roy has to leave the safety of his rocket in a small docking craft, it is brain-glutting horror. Tempered by one of those visual gems this movie wields like chocolate murder cake: with his rocket parked in orbit “above” the plane of Neptune’s thin rings, Roy maneuvers the docking craft through the ring particles to Clifford’s space station “below.” And when he attains his father’s hull, his docking craft accidentally floats away, irretrievable… Again, this movie has planted in our breasts how unforgiving and deathly this environment is, so it is the end of Roy’s world! Roy watches it with that unperturbed heart rate, knowing he is lost – unless he finds his father within…

We are what our parents make us. Roy is so closed off, so unshakeable, so heart-steady because his father had that same something in him that crushed humanity out. To assuage some sort of guilt, or maybe for closure, Roy just needed to hear it from Clifford’s mouth, up here in orbit around the sixth planet: “I didn’t care for you or your mother, and your small ideas…”

The son suffers the sins of the father, “Am I you, being pulled down the same dark hole?” All this time, they’ve been using Roy’s unchanging heart rate as a metaphor for him being emotionless. The redemption for Roy is not in finding his way back to Earth, but in finding that his heart can beat faster… 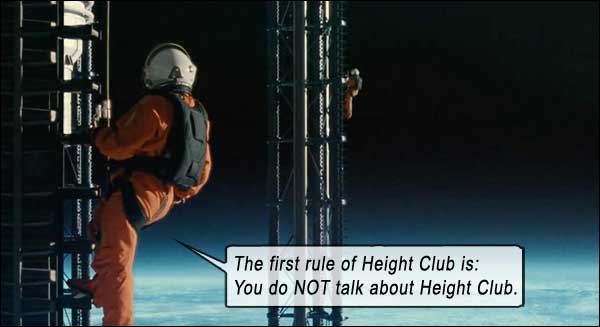 Written by James Gray and Ethan Gross, and directed by Gray, AD ASTRA is a space movie for adults, controlled, intellectual and thought-provoking. You take your girl to ONCE UPON A TIME IN HOLLYWOOD to watch Pitt and his muscles; you watch AD ASTRA alone, to watch Pitt’s acting muscles; his performance so naturalistic and underplaying. He conveys the expansive, crushing, infinite weight of the Cosmos on our insufficient human frames. And when he asks, at the end of his tolerance of life’s charade, “Why go on? Why keep trying?” we feel that truth in our marrow.

And then he “Iron Mans” outa there, making the same physics mistake as THE MARTIAN, ruining an almost perfect movie.

Thinking he is stranded on Clifford’s dead ship, Roy lightbulbs on the idea to sling himself off Clifford’s rotating radar dish, to be hurled back to his own ship. He uses a metal plate to shield him from the ring particles as he ploughs through them.

[sigh] It’s a well-known fact big budget movies hire science advisors and then DON’T take their advice. But it’s especially galling when AD ASTRA obviously took lots of science advice and then decided to throw all their hard-won cred in the toilet with these final imbecilic scenes.

Firstly, why did Roy park above the rings? Because he had to drive through ring particles down to Clifford’s ship, and any time you encounter celestial bodies – be they moons or grains of sand – they affect your direction and velocity, and endanger your safety. Now Roy has to hurl himself through the particles to get back. And all orbital mechanics goes out the window, as he aims at his ship as if it was in an atmosphere, then hits so many thousands of particles on the way back, his direction and velocity should have left him head-down ass-up at Uranus.