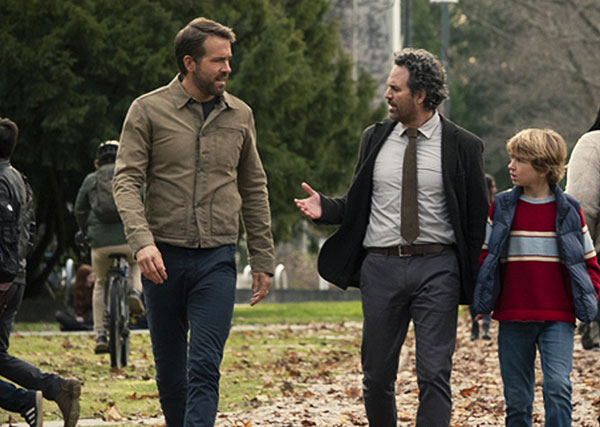 It doesn’t matter which cinematic universe you’re from – Mark Ruffalo will be there to charm you.

For the Love of Adam.

Never have I cried so much at a time travel film, especially one loaded with this many Hollywood tropes. THE ADAM PROJECT is pretty straightforward in its first two acts, about a pilot from the future who lands in 2022 and enlists the aid of his 12-year-old self to time-travel further back in time to meet their dead father and restore something-something one-point-twenty-one-gigawatts… but in its third act, ADAM PROJECT just overwhelms with the poignancy of its father-son redemption.

When we meet Young Adam (played well by Walker Scobell), his father is one year dead, and for some reason Adam resents him. We take it for granted it will turn out to be the same ole trope of working-father- with-no-time-for-son. Then we meet Big Adam (Ryan Reynolds, still just playing Ryan Reynolds and somehow getting away with it), arriving from the future, and retaining a hatred for his father. Oh, so maybe it was alcoholism, or wife-beating, or gambling away Adam’s college money?—we grit our teeth and wait for the inevitable flashbacks; obviously a character build for the two Adams – something tragic in their past to overcome together… but the flashbacks never come… There’s something original (for Hollywood at least) coming ‘round the corner to slap us in the smug…

Adam’s mother is Jennifer Garner, who basically disappears from the movie after the adventure kicks in.

The adventure itself is the infamous Biff Conundrum: “We have to stop the baddie from the future going back in time and giving their young self a McGuffin that will make them all-powerful in the future.” Biff is played by Catherine Keener and her past self de-aged looks like the efx department used a deepfake phone app.

Zoe Saldana is Laura, Big Adam’s modern action-chick girlfriend, another soldier from the future whom he is battling across time to reunite with.

ADAM PROJECT has all the whoosh and whizbang and paradoxical jargon that comes with any time travel movie, but the father-son relationship at the heart of it will tear your heart out. Probably because father is Mark Ruffalo – those puppy dog eyes for days.

We discover Young Adam resents his father for the simple fact that he died. And in so dying was “not there for him” – Ruffalo’s untimely death itself was regarded as “abandonment” by the young child. Young Adam maintains “It’s easier to hate than to forgive,” and would carry that irrational emotion into adulthood.

And the tears will come when puppy-dog Ruffalo holds Big Adam’s face and tells him over and over, “I love you! I love you!” … I fully realize that as we age, more and more things make us cry, whether aimed at our heartstrings or not, because the regrets just keep piling up. Any tenuous resonance with our own broken life sets us off: estrangements, missed opportunities, loves lost, failed fathers and mothers and sons and daughters – yet this open admission of love from a father to a son is anything but tenuous; direct and unambiguous, it’s what ALL humans seek.

Alright, all weeping aside, after Ruffalo declares his love for the 47th time to Big Adam, right there in front of Young Adam… wouldn’t that mean that Young Adam’s whole worldview would change, and therefore his lifestyle and life choices would change? Therefore, turning Big Adam into a different person immediately. There’s a throwaway line about Big Adam being ripped (because – Ryan Reynolds), but if Young Adam flensed the animus toward his father at this young age, wouldn’t his older body shape be different? Meaning that a lot of his anger and inborn need to dominate the gym was born of revenge focused on his father. Maybe he’d still have a motormouth, but probably not as successful with the ladies as ripped Adam. And now, with his newfound love of his father blessed deep into his heart, would he even need the crutch of a hot girlfriend like Zoe? Would he have had the drive to even go after a chick like this?

The love of Mark Ruffalo can be a terrible thing.