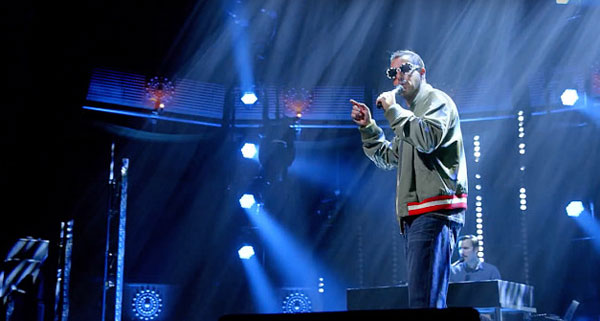 The lightshow is the least of the distractions you have to work through to find the jokes.

Adam Sandler used to be a funny standup comedian. I used to love that unsure persona, and the sudden left turns in his gags. This was way back before most of you Adam Sandler fans were Adam Sandler fans (circa 1990). Then came SNL (1990-1995), and numerous movies, some good, most bad; a handful of comedy albums that rivaled the boorishness of his worst movies, and after all those decades, we arrive at – his first  Standup Special, ADAM SANDLER: 100% FRESH.

Yes, Adam Sandler used to be a funny standup comedian.

In 100% FRESH, Sandler tries to recapture that unsure youth of his past: funny songs (that were a feature on SNL), disjointed observations, framing himself as an Everyman (an area rug on the stage and some middle-class furniture in the background) even though he’s a multi-millionaire, dressed casually-to-the-point-of-unkempt, with thousands of edits skipping between small clubs and arenas, that we realize are purely a distraction due to the comedy being so weak. Let’s face it: Sandler has traveled way too far down the stream of Life to recapture the youthful spark that ironically made him what he is today.

The distracting edits are not like the effective cutting between Chris Rock’s KILL THE MESSENGER (2008, which cut between arena performances in London, New York and Johannesburg), where the comedy was powerhouse across the board, across the pond and across the edits; the cuts in 100% FRESH seem like Sandler’s team filmed all his bits in small clubs where he was crafting the jokes, and then, in a pique of desperation, left most of those bits in the final edit because they couldn’t find anything better in his “polished” arena shows.

Sandler has made some reasonably watchable movies (PUNCH-DRUNK LOVE, REIGN OVER ME, FUNNY PEOPLE), but this standup presentation is Sandler in the vein of his most juvenile roles (THE WATERBOY, LITTLE NICKY, BIG DADDY), his jutting-jawed voice prominently featured, the jokes mostly going nowhere, and many landing totally flat – if it weren’t for the canned laughter.

Though rock bands are the main offenders in tweaking their live album audiences, here, in glaring obviousness, we can hear laughter in many places that really doesn’t match the performance, or ambience of the venue. Because the film switches constantly between performances in various forums, the filmmakers (directors Steven Brill and Nicholaus Goossen) cross-fade the applause/laughter from one performance into the next performance, sometimes retaining the previous crowd’s heft throughout the new edit, where it clearly doesn’t match the room, or the reaction to a certain joke. Just watch carefully as some truly flat jokes are propped up with canned laughter – which surprises us firstly for how big the crowd is reacting to this lame punchline, and secondly for the audacity of the producers who think we are falling for this duplicity.

When you can’t find an actual funny gag line for the trailer, you’re in deep caca. Watch as the trailer meanders through a montage of Sandler cackling and hooning around onstage – with not one actual gag line worthy of a superstar of Sandler’s ilk.

Sometimes accompanying himself on guitar, sometimes accompanied by keyboardist Dan Bulla, 80% of the show is raunchy comedy songs, some funny, most resorting to lowest common denominator fare, i.e. piss, shit, farts and sex. He talks and sings a little about his wife and daughters, always referring to himself in the third person as “the Sandman.”

The show gets tiresome very quickly (which also accounts for the many edits, trying to retain our interest over 73 minutes).

And then Sandler’s Number One Champion Unfunny Bumboy Rob Schneider appears in a cameo, as an astronaut singing about sixty-nining in zero-gee. And my faith in humanity is lost all over again.

To each their own: George Carlin fans love him for his articulate incendiary insight, his intelligent deconstruction of society, his hilarious observations on human nature, and his mind-breaking syllogistic pummeling of calcified institutions like religion, government, marriage and war. And Adam Sandler fans love Adam Sandler for exactly the opposite.

100% FRESH is exactly the opposite of comedy.