The Unbearable Rightness of Being.

They make sure the world is running to The Plan. They’re THE ADJUSTMENT BUREAU and they’re watching Matt Damon’s every move. And adjusting it. All while wearing bad hats. 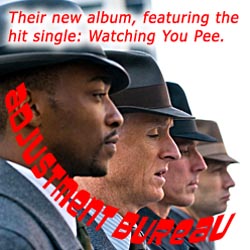 Damon is Congressman David Norris, on a campaign engine steaming to the White House. Then he meets a girl. From Helen of Troy to the chick in the trunk of THE TRANSPORTER’s car – Women Be Trouble.

Average girl Emily Blunt is Elise, whom David falls for madly after he meets her in a men’s room (my kinda woman – not afraid to troll for penis, and if she’s inured to the stink of a men’s room, she’s not going to throw you out of bed for farting either). But a strange group of reservoir dogs called The Adjustment Bureau tells him he can’t have her. They inform David, “The Chairman makes the decisions… you use many names for him” (implying, of course, God, maybe Frank Sinatra, maybe Eric Clapton…?) and David’s destiny aims toward U.S. President – if he hooks up with Elise, it’s goodbye White House. But David obstinately refuses to follow their directives – by God and all that is Adjustable, he wants that Toilet Panty bad…

The movie is well-made, with good performances and good direction, and the intriguing story has the potential to be world-girdling (from a Philip K. Dick short story called The Adjustment Team), but then writer-director George Nolfi does something unutterably stupid that loses me completely. He uses magic.

You see, early in the tale, David’s actions have to be “adjusted” by Bureau guy Harry (Anthony Mackie) ensuring David spills his coffee and misses his bus. But Harry falls asleep. Okay, I can let slide superior beings being as lazy and unreliable as humans (“made in his image” an’ all), but then Harry wakes and gives chase to the bus that David has boarded (with coffee unspilled); after two whole minutes of chasing the bus on foot, unable to catch it, Harry eventually gestures with his hand – using MAGIC to make the coffee spill! Why didn’t he do that in the first place instead of running after the bus?

Poffy in need of Adjustment

Later, when David is trying to run from the Adjustment Bureau, Richardson (John Slattery) makes him trip by magic. My point is: if these guys have magic at their disposal, then the whole movie, which is predicated on that coffee spill gone awry, is moot, because magic could have been used at any point to bring events back on track.Dick’s original story features a dog that speaks English (a “Summoner”) who is integral to the fork in the timeline. So a speaking dog is too outlandish for this movie and yet arbitrary magic is somehow more feasible?

Slattery as Richardson reminds us of Terence Stamp – lo and behold! – Terence Stamp suddenly appears as Thompson, the Adjustment Officer above Richardson! (Constantly implying Thompson shares a cubicle so close to “God” he can flick rubber bands at him.) Thompson is also Mr. Exposition: “We actually tried Free Will before. After taking you from hunting and gathering to the height of the Roman Empire we stepped back to see how you’d do on your own. You gave us the Dark Ages for five centuries…” Basically, Thompson blames all the good parts of human history on the Bureau and all the World Wars and Missile Crises on dumb humans. “…You don’t have free will, David. You have the appearance of free will.”

My question is: Why do they care? And who’s responsible for Snooki?

Thompson lays out that David would go on to be president and Elise would become a world class choreographer if they separated. Here’s the flaw in his thinking: he’s equating quality of life with those posts. And David is equating quality of life with being with Elise. Of, course, they’re both right. Being with a chick or being the president are both only part-happiness. No one’s life revolves around just One Thing.

Then Thompson makes a conceptual mistake: “If you stay together it destroys both your dreams – she’ll end up teaching dance to 6-year-olds…” Well, Mr. Pompous Co-Worker to God, some people consider teaching 6-year-olds an ultimate joy; nurturing the dreams of hundreds of little souls. Weigh that against the trauma and responsibilities of being a world-class dancer… And who wants to be president these days? Shit job, shit pay, shit hours – and you’ve got to put up with John Boehner.

Ponderings on religion, guardian angels, the nature of free will, but all subsumed by puppy romance. Like THE ILLUSIONIST (2006), what could have been an intriguing world-shaking story (Philip K. Dick’s tale revolved around nothing less than world peace if the protagonist followed his destiny), THE ADJUSTMENT BUREAU degenerates to The Getting Of Panty. This shallow abomination tells us that if you fight to keep your chick hard enough, even God will change world destiny to suit you. And all those warring people in Darfur and Yemen and Iraq and Palestine and Ireland can just wait for the next magic bus to World Peace.

Has no one seen the other giant problem with this story? That if Harry can fall asleep ONCE and cause world history to be diverted through his fallibility, how many other mistakes have the Adjustment Bureau made? Is that why W got elected twice? Is that why Rob Schneider is still acting?

And Harry shows his proclivity for Chick Flicks by siding with David in the film’s final chase – where literally hundreds of New York elements could have been used to trip David, but no one can scare up the magical energy to just gesture at him – with Harry showing David how the Bureau hats allow them to traverse the magical doorways. (In other words: “That’s some bad hat, Harry!”)

The Bureau tells Matt Damon, “Your entire personality will be expunged if you reveal us!” Oh, so that’s what happened to Jason Bourne!