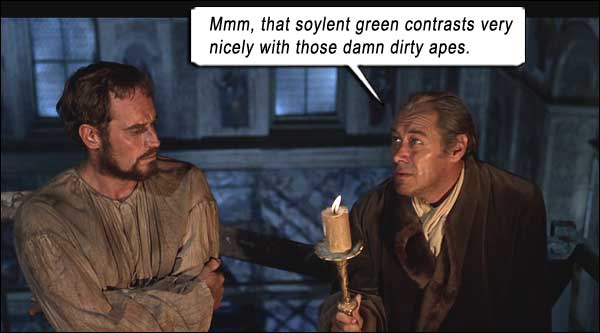 Stupendous over-acting from both Rex Harrison and Our Man Charlton is the saving grace of director Carol Reed‘s lavish THE AGONY AND THE ECSTASY, which threatens to bog itself sermonizing over religion and art, set in an epoch seemingly dominated by both, The Renaissance.

Adapted from a slice of Irving Stone‘s book of the same name, Heston is Michelangelo Buonarroti, all melodramatic neck-grabbing and body-hugging, whose quest to complete the Sistine Chapel ceiling fresco is tempered by his patron and inadvertent nemesis, Harrison, as Pope Julius II, who must balance the Chapel commission against his war efforts, constantly spurring Michelangelo into gratuitous melodrama.

The most dogged nullifidian would find inspiration in this tale through the sheer pioneering brilliance and stamina invested in the completed vault, camera in final scene panning over the Sistine’s magnificence, vainly trying to capture on 70mm that which is uncapturable. Goethe effuses: “Without having seen the Sistine Chapel one can form no appreciable idea of what one man is capable of achieving.”

Midway to completion, Julius tries to convey the majesty of his own craft to Michelangelo, who self-effaces, “It’s only painted plaster, Your Holiness.” Indeed. And Beethoven’s Ninth Symphony is only music notes.