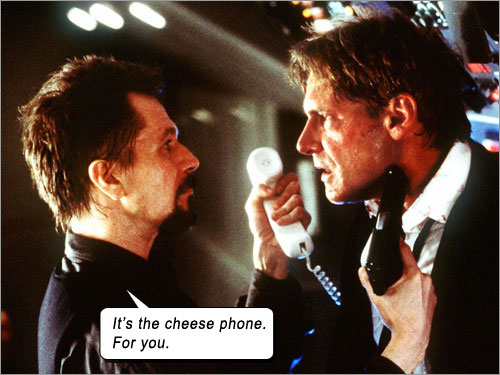 Russians hijack the American President’s plane, AIR FORCE ONE! Oh my! Whatever is going to happen now? Can I have a serving of foregone conclusion with my helping of blockbuster actioner?

Harrison Ford is American President James Marshall (because the name President Privileged Whiteman was taken), and Gary Oldman is Russian hijacker Egor Korshunov (because it’s Russian and Russians are evil). Their interplay as hero and villain is far from compelling. Why? Because in the best stories, we always feel like the villain has a chance of winning. But not in AIR FORCE ONE. Because it’s an American movie – and nothing bad ever happens to American presidents in American wide-release movies. Because – America.

First of all: Han Solo as president? How did that happen? Don’t Americans frown on their president being born in a foreign country – like Hawaii? And Solo is from a galaxy far, far away.

Movie opens with American Seal Team Pricks kidnapping a Kazakhstan general (Jürgen Prochnow). At a world leader dinner, we find out the general was committing atrocities on his own people and President Marshall chastises America and the world for taking so long to step in. He vows that America will never again negotiate with terrorists. (Don’t know what he meant by that, because it was a straight up kidnapping of a dictator, but we don’t question the red white and blue of it all.)

Let’s sidestep here to call this bullshit what it is, cinematically and in real life. Cinematically, whenever anyone says No Negotiating With Terrorists, they always end up as the negotiable commodity. And in real life, when a leader stakes that claim – and if he were to be kidnapped – it would be tacitly understood: Okay, negotiate, negotiate! What government in their right mind would stick to an absolutist policy if their leader was threatened? Think of that line from BATTLE FOR THE PLANET OF THE APES: “lf a king forbids his subjects to wear a crown, that doesn’t mean he can’t wear one himself.” In other words, what applies to the plebs doesn’t apply to the leaders. So even cinematically, when James Marshall is kidnapped, you’d have to be mentally challenged to think all his underlings would stick to his policy like a schoolyard pinky swear. But I guess they all swore this morning before eating their Cocoa Puffs…

Russians hijack the president’s plane (called Air Force One because they weren’t allowed to call it Dick In The Sky) demanding that America free the Kazak general. President Marshall escapes to the bowels of the plane and does his best John McClane in sneaking around and wiping out the Russians one by one until he must face off with The Villain.

With an R-rating, one would think that maybe the filmmakers would try something new – like allowing the Russians to win against the Americans, in a morally ambiguous tale of political conundrum. Not gonna happen. Because America big dick always right fuck you.

Directed by Wolfgang Petersen (who directed Prochnow in the magnificent DAS BOOT (1981); here, Prochnow is no more than a McGuffin), with an over-enthusiastic soundtrack by Jerry Goldsmith, AIR FORCE ONE is a decent actioner with an outcome so obvious you could set an Obama election by it.

Wendy Crewson is First Lady, William H. Macy is a general, Dean Stockwell is a cabinet member, Xander Berkeley is a treacherous secret service agent, Elya Baskin is Gary’s right-hand hijacker, and Glenn Close is the Vice President, emoting the shit out of a speakerphone.

At one point, Korshunov speaks delicately to the president’s daughter (Liesel Matthews) about the necessary evils of leaders like her father. Again, being R-rated, we wish this exchange might have ripped open a moral ambiguity like a wound; instead, daughter is drunk on red white and blue Kool Aid and tearfully pronounces her father a great man. The dialogue so slanted and ignorant, it almost seems like the original interesting dialogue was cut from this scene by the Gutless MPAA and overdubbed with lines cribbed from Screenwriting For Dummies.

The fact that America commits an illegal act (kidnapping) to stop an unethical act (genocide) is never addressed. So many interesting angles might have been addressed, like America shoving its fist up other countries’ arses without so much as a ‘By your leave.’ Then when that country retaliates for America’s fist, they’re the bad guys.

Movie makes a big commotion when Korshunov executes hostages – White House staffers – and gets all haughty about the “innocence” of people like the NSA Advisor (Tom Everett). Let’s not forget the USA executed Saddam Hussein (and many others before him in similar baked-up circumstances) for something he did not do. That’s not to say Saddam was innocent of crimes against humanity. But then, who’s to say the NSA Advisor is innocent? That particular American post is responsible for ten times more deaths and ruination of peoples’ lives than Saddam ever was.

Ignore. Slick Hollywood action movie in progress. Imminent cringeworthy dialogue on deck; President Marshall to Egor Russian: “Get – off – my – plane!” Oh no, he di’nt! That’s OUR plane, Mr. President, We the Taxpayers. You just get to borrow it for four years when you buy the White House with corporate blood money. Or was the beloved President pining for the Kazakhstani way of life, where his junta owns all the military hardware, which would give him the right to call it “his” plane?

We knew we shouldn’ta trusted an alien as president!