Big Ups. And Much Sideways. 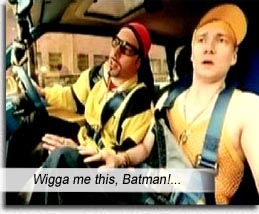 Bet Charles Dance has never in his career said anything remotely like: “Is there any reason why there should be an absurdly dressed half-naked man chained to a fence being tossed off by an old blind council worker?”

The half-naked man is hip hop defender of the Westside Massive turf of Staines, west of London, Ali G (Sacha Baron Cohen), chained to a government building on a hunger strike (which he has just broken by nibbling on a KFC chicken tender). A rival gang leader has taken advantage of him and pulled his pants down. Whereupon a blind council worker polishing the fence is also unknowingly polishing Ali’s knob. If you haven’t guessed yet, ALI G INDAHOUSE is not the type of girl you take home to mama.

Buoyed by the success of his criminally funny DA ALI G SHOW (where Cohen perfected the art of catching people off guard with his naive, ambiguously-wigga Ali G, using their ignorance of his parodied character against them), Cohen ambitiously ramps Ali G into movie format. Which is a big up for Cohen, aiii, but not so formidable a career move for Ali G.

ALI G INDAHOUSE works more often than it doesn’t. The cultural gap is not so much to blame as the aura that Cohen has built around his fake celebrity hip hopster. We are used to seeing him blindsiding real life celebs and officials, whereas here, too many people are in on the gag. That is, we know everyone Ali G interacts with is in concert creating a “comedy” – even those people who seem oblivious to his shtick, like the Prime Minister (Michael Gambon). The movie works best when Ali can riff without too much involvement with the other cast, ironically, his own ignorance creating the humor this time.

Charles Dance is Deputy Prime Minister, David Carlton (aided by perfect-9 hardbody Rhona Mitra), who fixes Ali’s election into Parliament, to be the Prime Minister’s advisor on gaining the youth demographic, knowing full well Ali would embarrass the Prime Minister out of office, thereby setting the stage for him to be elected PM himself. His plan works all too well, when Ali’s forthright stance on “keeping it real” only skyrockets the PM’s popularity.

Ali’s girlfriend/ prozzie/ ho/ skank/ bitch is “Me Julie” (Kellie Bright); his posse mate, Martin Freeman (best known from Ricky Gervais’s THE OFFICE), who pulls off some fine jamming for a whiteboy.

Drug gags, sex gags, scat gags, hip hop gags, gags that fall absolutely flat and gags that fly, ALI G INDAHOUSE is an uneven potpourri of throwing everything this character has against the wall and not caring whether it sticks or not; like a British version of POOTIE TANG (2001) – absurdist comedy about a street thug rising to prominence to battle the establishment.

The message that politicians are either stupid or crooked is nothing new, and director Mark Mylod, with writers Cohen and Dan Mazer, traverse no new ground imparting that message, which Ali spells out quite literally: “R.E.S.T.E.C.P! Do ya even know wha it spellz? Yes, Restecp. How’s anyone out there meant to restecp each other, if you lot in here, don’t even start restecpa-ing one another?”

Unfortunately, Ali’s character does not remain the resolute, clueless renegade. It is disappointing that the film gives him a “respectable” arc, so to speak (or a restecpable one at least) – he is made Ambassador to Jamaica (the wicked pot being a bonus, of course) and goes from being a drug-addled misogynist to a Parliamentary drug-addled misogynist…