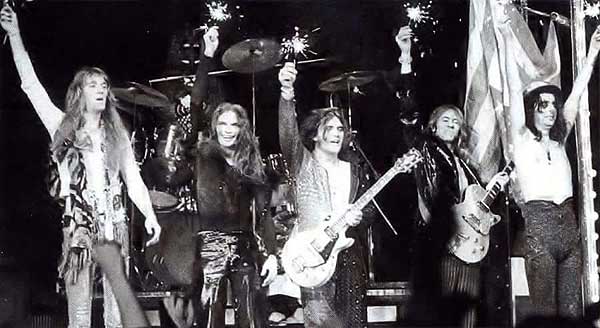 Alice Cooper Band 1971: most killers end up in a lineup.

Killer on the loose!

lice Cooper’s fourth album Killer expands on the ambitious rock-opera direction the band started on Love It to Death. There are still vestiges of the avant-garde they flaunted on their first two bizarre albums, but producer Bob Ezrin’s mighty hand guided them like wayward sheep through the horror forest.

On the cover, a constrictor – a snake that Alice drapes around himself onstage in what was now the premier shock-rock stage show in America.

Under Ezrin’s guidance, the same lineup (Glen Buxton – lead guitar, Michael Bruce – guitar, keyboards, Dennis Dunaway – bass, Neal Smith – drums, and Alice Cooper – vocals) would all work meticulously to craft an album where each instrument worked at its greatest potential to craft songs that seemed impossible for just five men to create. Ezrin’s little forays into orchestra would also not go unnoticed as the spectacular icing on this graveyard cake.

Both the singles (Under My Wheels, Be My Lover) made it into respectable positions on the Hot 100 Billboard charts. 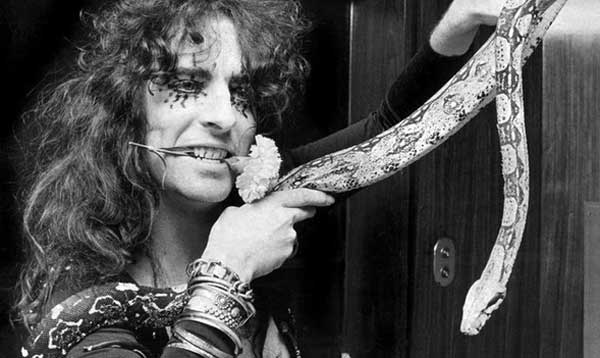 The straight-ahead rock and roll of Under My Wheels opens the album, complete with horn section! (Ezrin, you old dog!)

Slinks into the sleazy Be My Lover. My young drummer friend and I always loved the way Cooper sneered the line, “She asked me why the singer’s name was Alice…” Vince Furnier might claim that [paraphrased] “Alice Cooper was always meant to be a BAND NAME, conjuring a little girl with pigtails – hiding an axe behind her back. But over time it kinda settled on me as the lead singer,” but we can see from the credits of Pretties For You onwards, Furnier was always being credited as “Alice Cooper” for writing and lead vocals, so he wasn’t trying too hard to discourage the name as “his,” from the very beginning of its tabulation on public product.

At 8 minutes, 22 seconds, Halo Of Flies is arguably the “epic” of this album (reportedly to show King Crimson that Alice could also write prog-rock), opening with guitars simulating the buzzing of flies; then, a repeated single organ note over a dirty guitar riff is so effective, as it launches into a galloping screed about the international spy game that changes feel many times, at one point treading lightly over the melody of My Favorite Things (from THE SOUND OF MUSIC), with lyrics instead: “Daggers and contacts / And bright shiny limos…”

Strangely, Halo was released as a single only in Netherlands – and was a Top 10 hit. So it grew little legs, infiltrating society: a Minneapolis band named itself after the song, and it was covered by a few other artists. 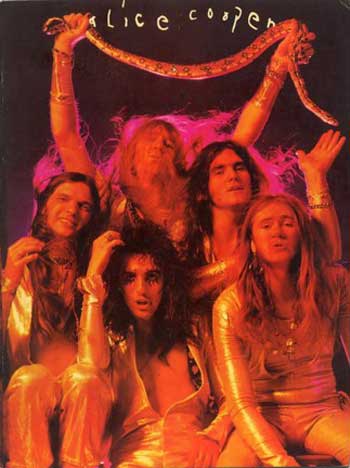 Note the energy that went into this photo shoot: matching outfits, Alice makeup, lighting, wind machine, SNAKE! 4th album, but only second mainstream album, their management already gearing them up to look like superstars. No matter the thinking back then on this photo shoot, in retrospect the visual legacy is priceless!

In Desperado, a gunslinger boasts of his lightning hands, “You’re a notch / And I’m a legend..” but is not without introspection: “I’m a picture / Of ugly stories / I’m a killer / And I’m a clown.” A cello interlude, courtesy of Bob Ezrin.

You Drive Me Nervous; the slam-forward driving beat, intensity foaming at the mouth; Buxton’s wailing guitars, all capturing the parental-induced psychosis of the singer.

Yeah, Yeah, Yeah, a throwaway track; seems like Ezrin took a day off and the Alice Cooper Band threw down this raw bucking thing with the creeping bass line and forward thrusting bellbottoms.

Dead Babies. These are the unmitigated classics on Alice Cooper albums – those taboo fascinations that separate them conceptually from every other artist. Like I Love The Dead a few years hence, as long as it caused mothers to cringe, that was the appeal to a young long-haired cucumber finding his controversial way in the world. Bass guitar picking somberly, with Leslie’d guitar in background, while Alice whispers something about Daddy being an agrophile, mommy an alcoholic, and Little Betty sleeping in the graveyard… and then – a baby’s cry – oh shit! “Dead babies / Can’t take care of themselves / Dead babies / Can’t take things off the shelves…” and of course, the unique modal approach of Buxton making things scarier than they already are.

I did not follow the careers of the other band members after Alice co-opted the name and struck out on his own after 7 albums, but he seems to be the only one who embraced the horrorshow as career.

Killer. The seven-minute discordant closer to the album, which starts off straight rock (with a side salad of tritone wailing), then spirals into another layered section, funneling into wailing at the gates of Dante’s Inferno; ultimately diminishing to organ pads, like a funeral procession… leading us down, down, into the soil of the earth. The band pulls out all the operatic stops on this one. A hard stop – and a halo of flies buzzsaws us out! 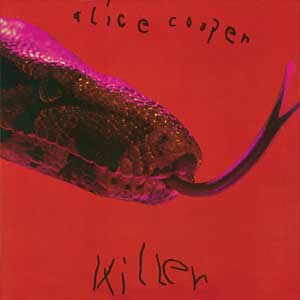 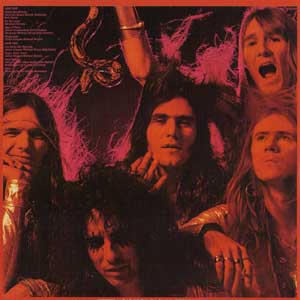 “Under My Wheels” ♦ Alice Cooper (mimed, with live vocals and horns removed)