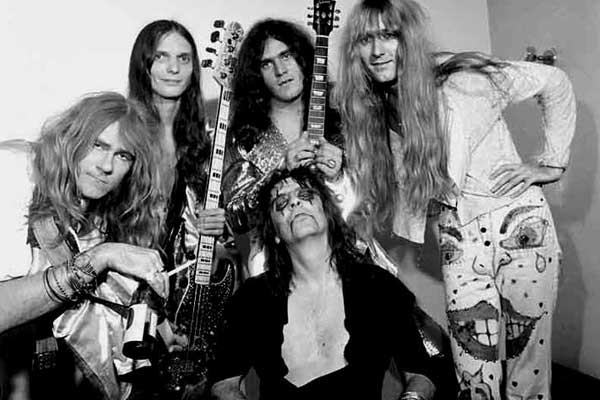 Alice Cooper Band 1971: No more pretties for you…

A melody black / Flowed out of my breath…

rapped in a dark room. From out of the blackness swirls a delicate piano and an unsure voice, quaking, lamenting, “I couldn’t tell if the bells are getting louder / The songs they ring I finally recognize…”
Something ominous this way comes…

“I only know / Hell is getting hotter / Devil’s getting smarter all the time…”
Something mystical, something unholy.

“And it would be nice / To walk upon the water / To talk again to angels on my side…”
Something RUINOUS!

This was how I heard the album Love It To Death. My older cousin would entomb me in his dark room for maximum horror effect, and crank the volume on his tiny record player up to at least 20 decibels, which is the sound of a jackhammer (about ten blocks away). No matter, it was loud enough for my virgin ears to be forever lost to the demonic epilepsy of – Alice Cooper…

Love It To Death is the Alice Cooper band’s third studio album, although it could easily be regarded as their first. It changed gears with grinding force from the avant-garde freakshow of their first two albums (Pretties For You and Easy Action, both on Frank Zappa’s Straight label), and established the sinister horror-movie ethos that would be Alice Cooper’s calling card for the band’s – and then the singer’s – career. (Keep in mind, at this point, the name “Alice Cooper” still referred to the BAND, not the lead singer, Vincent Furnier, whom public perception would endow with the name, which he would then roll with.)

A 19-year-old Bob Ezrin was hired to produce and hone the still avant-garde band into a commercial hard rock act. Ezrin’s superior production, coupled with the fact that Zappa had affiliated his label with Warner Bros., propelled Alice Cooper into the world arena.

Though Alice Cooper originated from the direction of nihilistic arty smartypants – not, as conjectured, from glam, although they rode the wave of its popularity – the band was not as musically challenging as Genesis (Trespass, 1970), not as trippy as Pink Floyd (Atom Heart Mother, 1970), not as experimental as Zappa (Weasels Ripped My Flesh, 1970), but rather like an evil Small Faces or Rolling Stones. It was blues-based heavy rock, with tritones aplenty from warlock guitarist Glen Buxton.

Love It To Death is not a concept album, but it sure as shit feels like one. The overbearing weighty doom of its three standout tracks (Black Juju, Second Coming, Ballad Of Dwight Fry) enshroud the album like a storyteller weaving his past sins from a gray limbo. This unholy trinity is surrounded by great rock and roll, each straight ahead kicker yet seeming to have some tenuous link to the prime three, from the swirly Caught In A Dream, to the angsty punch of I’m Eighteen, to the driving rockers Long Way To Go and Hallowed Be My Name.

The album cover seems to ape Paul McCartney’s Band On The Run – a band caught in a spotlight – but the Wings classic would not be released until December 1973; and these guys really looked like they had escaped a mental asylum. Front and center, lead singer Vince Furnier, wrapped in a cloak, not wearing the characteristic eye makeup that would define his onstage character (on the original cover, Furnier is poking his finger through a hole in the cloak to simulate his penis – removed in later versions, because people allow censors to turn them into the gutless imbeciles that the censors themselves are); guitarist/organist Michael Bruce leans in with tasseled jacket and gold lamé pants; far right, evil-semitone monger Glen Buxton with Wolverine sideburns and – hippie shirt? sarong? flowing wizard sleeves? Please let it be flowing wizard sleeves. One guy wearing a spaghetti-strap blouse: drummer Neal Smith. One guy looking like a zombie, not because he is wearing zombie makeup – no, bassist Dennis Dunaway just really looked like a zombie. 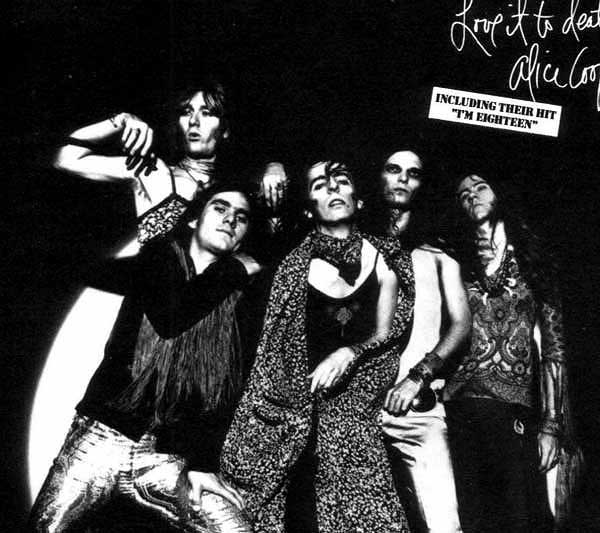 Caught In A Dream opens the album like an apology for the last two albums. A straight-ahead, tongue-in-cheek Stones-ish rocker about a boy trying to find his way in a world that he thinks owes him; heralding the new direction for the Alice Cooper band – which would soon enough branch into more complex hard rock fare, with the band surprisingly finding its unique voice on this very album, long before they complete Side 2.

I’m Eighteen. The smash single that spoke to a generation – and then that same generation with different members, over and over again. Plodding, plaintive, subversive. Maligned youth blaming the very thing he is maligned for – his age – “in the middle of doubt” “confused every day” – ultimately embracing his shortcoming – “I’m eighteen and I LIKE it!”

Apparently, the band helped the single’s success by calling radio stations for airplay (back in the day when you could do that, and when radio airplay mattered).

Furnier would cover his vocal range in this song, and we would discover – uh, he can’t really sing! No trained vocalist, Furnier would keep his low end in tune like a parody of 1940’s radio announcers (almost “talking in tune”) with his high-end getting “scratchier” the higher he went. Anything from the high G4 upwards was just pure tearing of vocal cords. But we loved it! It was this stamp of uniqueness that would launch a thousand coffins. 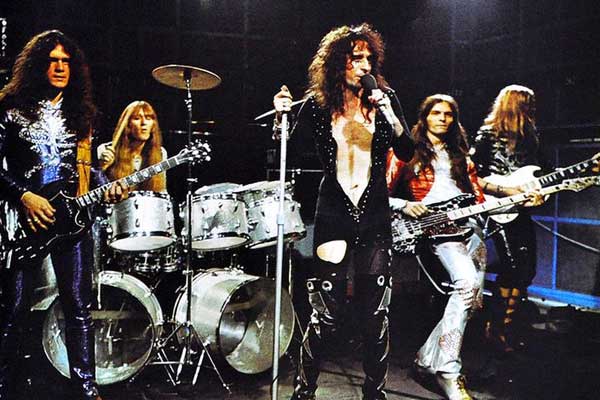 Alice Cooper Band 1971: the horror… of a onesie that’s lower than your happy trail…

Black Juju, like Zeppelin’s Black Dog, was apparently named for a stray dog that wandered into the studio. But it’s really about the devil. I should know – I heard it when I was 8 in a dark room. Tribal drums, fading in from blackness; eerie organ, big clutched chords; an evil carnival barker wailing, “Bodehhhhhhhh…!”

In heady horror-pantomime, it consumes us, “Touched by the toil and plunged into his arms…” Terrifying lyrics, “A melody black / Flowed out of my breath…” He talks about something “under the soil, now waiting for worms…” Bruce pads the organ, while Buxton conjures his enigmatic diminished and minor-7th lead guitar noises… The carnival orgy dies down and Furnier speaks softly, reasonably, “We all need our rest”…. as the music fades to nothing but a ticking clock (drumsticks). You’d never be able to sustain this kind of breakdown nowadays. Alice Cooper leaves us to think they are rational at last… as we rest… — until the screaming starts!— And the power chords and swirling organ lead us to the climax, like the buildup to the last chord in The Beatles’ A Day In The Life. Only more evil.

This would not be the only Beatles reference. Second Coming would be the first song in the band’s epic diptych on Side 2. (Apparently, it was titled as a dig over the pomposity of the Beatles’ Sergeant Pepper album “like it was the Second Coming.”)

The opening lyrics, in the dark room, are from Second Coming. Is this man watching the world go by from some other dimension? Is he in limbo? Why has he, “just come back to show you / All my words are golden / So have no gods before me /

Ballad Of Dwight Fry. Segued from Second Coming, this operatic piece opens with caressed piano and a child’s voice asking when daddy will come home. Then we hear from daddy…

Is daddy in a mental home? In purgatory? Is he – Dwight Fry? (The real life Dwight Frye was an actor in the 1920s-40s, who in 1931 would secure two of his most iconic roles – as Renfield in DRACULA, and Fritz in FRANKENSTEIN. From what I can tell, this song’s title is just a serendipitous coincidence.)

Evocative, hypnotic, Daddy sings about being in misery watching his mind slip away, wishing to get back to his daughter. This line still send chills up my spine: “I’d give her back / All of her playthings / Even – even the ones I stole…”

By now the band’s stage shows had developed to reflect the horror-panto of the music, with Dwight Fry featuring Furnier singing the body of the song while entwined in a straitjacket; upon his “escape” he strangles his nurse, and is then dragged to a guillotine – and beheaded! All smoke and mirrors of course, but imagine this spectacle for a 1970’s audience! The industry was exploding with glam (The Sweet, David Bowie, T.Rex), and these guys were taking it ten steps into the crazy crazy…

Sun Arise. How did this American shock rock group ever come across the Australian Outback entertainers Harry Butler and Rolf Harris, to cover this song? This connection blows my mind! A catchy melody and simple lyrics, where you are just waiting for it to be “evil” in some way – but this E major tribal chant speaks of nothing more than the sun rising, “bringing back the warmth to the ground…”

By the time the majestic outro chorus fades with its I-IV-V tribute, we are breathless. How does a band DO this? Come from art-folk-weird to power-rock-epic? The Alice Cooper band would stay this course for four more incredible albums, until they would quietly “disband” without anyone realizing it because Vince Furnier would take up the mantle of Alice Cooper and keep releasing albums under that same name (but now as HIS name instead of the band name), never deviating from the ominous trajectory started with this classic offering.

I’ve never really left that dark room, have I?… 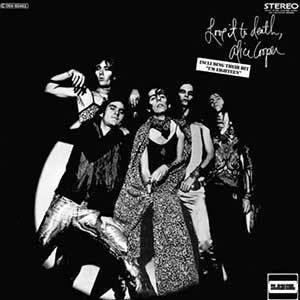 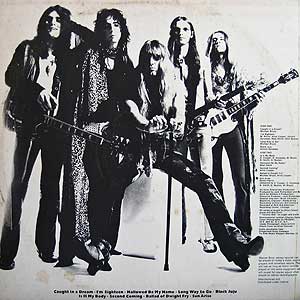