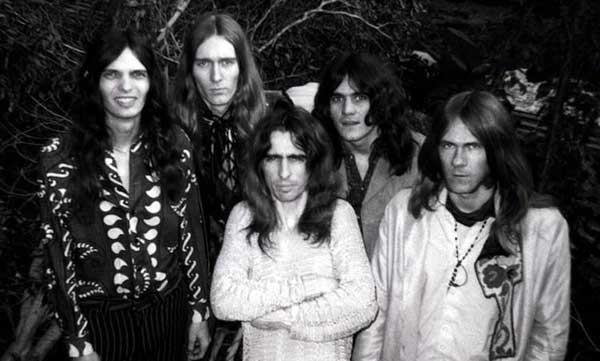 t wasn’t exactly crap. Yet Alice Cooper’s debut album, Pretties For You, was not exactly the theatrical cock-rock the group would become renowned for. Having ingested over a decade of Alice Cooper’s mainstream output (starting with Love It To Death – what I thought was their debut album), suddenly being exposed to the band’s rare, little-known first two albums (Pretties For You and Easy Action) was like a hippie bucket of water to the face. Man, this was high art. Not cock.

As an adult, I hear them very differently. The boy had no time for experimental artsy psychedelia – he had songs to write and people to be. The adult, with no more songs to write and no one to be but himself, is won over by the eclectic bravura.

They were raw, directionless, in need of a guiding hand (which would only come on their third album, in the form of Bob Ezrin and Warner Bros). For now, their debut, Pretties For You, effectively had NO producer, as legend has it that the band were left in the hands of Frank Zappa’s brother at Whitney Studios in Burbank; they thought they were just rehearsing – until Frank (who signed them to his Straight label on the strength of their ability to clear out a room with their bombastic stage shows) turned up at the end of the session and told them the recordings they made were THE ALBUM.

In this album’s formative grooves, I hear all the influences and roots of the band (and artist) that I would grow to love like a reptile. I never imagined I would re-hear beauty in this album’s saucy juggling of musical styles, the beatnik wantonness of the production quality and jangling looseness of the arrangements. But here I sit, as compelled as I was when first exposed to Love It To Death or Welcome To My Nightmare…

From its thunderous opening, Titanic Overture, the album journeys on short experiments that almost find a subject, motif, then shy away and end. Shades of Todd Rundgren, Pink Floyd, early David Bowie, and Frank Zappa himself.

10 Minutes Before the Worm and B.B. On Mars are bizarre, avant-garde experimentation.

Sing Low, Sweet Cheerio sounds like a heavier Monkees loosely jamming until they get mugged by jazz musicians.

Today Mueller. Well, who is Mueller? Today (2020), we can only envision the Special Counsel guy who fucked up taking down dumbo donald. But I think this orchestral piece with its strange flourishes and noises is named after a girl.

Living is the only real straight-ahead rocker, with a heavy fuzzed riff, reminiscent of The Yardbirds and the Moody Blues’ I’m Just A Singer In A Rock And Roll Band.

Fields of Regret opens with a bed of heavy guitars; a duel between that heavily distorted axe and Doors-like organ screeches, which devolves to both the instruments resorting to monster sounds before Alice is heard over the top almost indistinctly, in that coffin voice we know so well: “What horror must invade the mind / When the approaching judge shall find / Sinful deeds from all mankind?…” 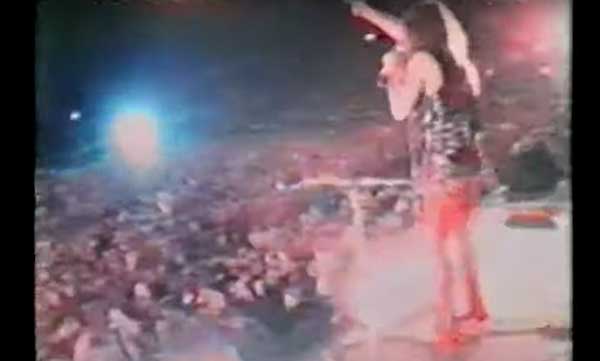 No Longer Umpire opens Side 2, an almost comical melody line in a 3/4 signature.

Levity Ball is a live onstage recording. The only song not recorded in the studio sessions at Burbank, it actually showcases how tight and bizarre the band was live. The clarity between all the instruments is commendable (considering it was done with 1968 audio gear!), but it shows the band’s ability at dynamics and smart arrangement of their own instruments (i.e. the lack of a producer on the album did not hinder the ideas getting across intact, albeit unfulfilled).

Earwigs To Eternity is a short experiment, sounding decidedly Beatles-esque. There’s probably more to this song than its one-minute, nineteen-second duration can convey, as The Earwigs was the first group name of the young turks that would eventually go on to create the Alice Cooper Band; they dressed in Beatles wigs and parodied Beatles songs.

Apple Bush. It’s about a redhead, right? Whose carpet matches her drapes, right?

Changing Arranging. I really like the death-fuzz of the guitars, which is achieved at many points on this album. A slightly more straight-ahead rocker closes out the album, with an introspective message from the artist “I fight a never ending battle inside / Just trying to rectify my personal pride / I swear I don’t know what it’s got over me / But I know it doesn’t want to be free!” Discordant interludes, an almost-shredding guitar solo, and a spasm of big ending hullaballoo.

On this album, Alice uses a straightforward singing voice; a smooth, clear baritone-tenor that has yet to find its character as the sneering, scratching graveyard troubadour. His visual onstage image was slightly clearer, as he based his look in part on Bette Davis in WHATEVER HAPPENED TO BABY JANE? “…disgusting caked makeup smeared on her face and underneath her eyes, deep, dark, black eyeliner.” Zappa’s all-female group Girls Together Outrageously (aka GTO) also got in on the act: “liked to dress the Cooper boys up like full size Barbie Dolls…”

You’d think that with the emphasis on their androgyny and dark promiscuity, Alice Cooper’s next album, Easy Action, would lean into the Barbie Doll ethos of visually attractive sex. Ironically, it was still experimental art. Not cock. 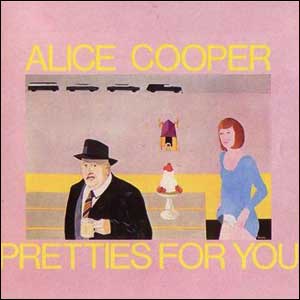 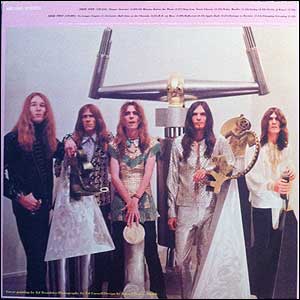