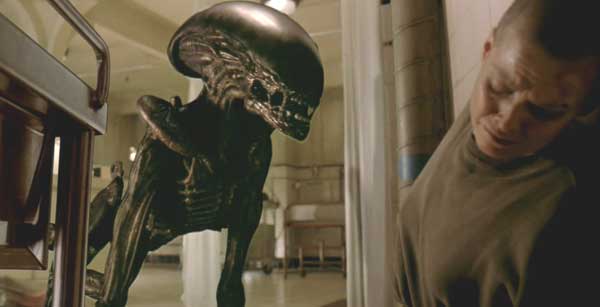 One maximum security prison planet. One xenomorph extra-terrestrial alien. Let the screaming begin. That no one can hear you doing in space…

And well I should bastardize the original slogan for the original ALIEN (1979). After the shotgun-sequel ass-klownery of James Cameron’s ALIENS (1986), with hundreds of hissing, cavorting aliens cluttering the frame, the filmmakers of ALIEN 3 pull back on the reins and again give us just one. A choice that would prove to be brave, smart and suspenseful, artfully cancelling out the devaluing nature of Cameron’s bombastic creature-palooza. 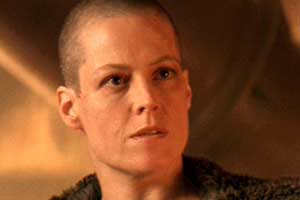 Before SE7EN (1995) and FIGHT CLUB (1997), video director David Fincher made his bones with this impactful third entry in ALIEN canon. And – like the two male directors before him – brings out the raunchy femininity of his star Sigourney Weaver, not by getting her down to her panties, but this time, by shaving her head! (Something about keeping the lice down, but only succeeding at keeping flies down…)

ALIEN 3 is a back-to-basics thriller, more concerned with tone than bone; more intent on eerie claustrophobia than popcorn spectacle. Rust-choked passageways and slime-soaked crawlspaces; an abandoned lead refinery morphed into a prison, populated with an all-male contingent of rapists, murderers and religious fanatics. As with all the ALIEN films, production design is visually stunning; characters come fully formed and madly maladjusted, and performances are stellar from the mostly British cast. Mostly.

Weaver returns as Ripley, following the events of ALIENS, crash-landing on this planet in her escape module. In the decimated module, the bodies of marine Hicks, android Bishop and youngster Newt, all dead or deactivated. Only hibernating Ripley survived. Unwittingly bringing with her something more dangerous than rapists, murderers and religious fanatics (well, maybe not more dangerous than religious fanatics) – an Alien.

Into this XY-chromosome den of iniquity, mysterious murders start apace. Only Ripley suspects it is something more than repressed man-rage or the word of Christ. 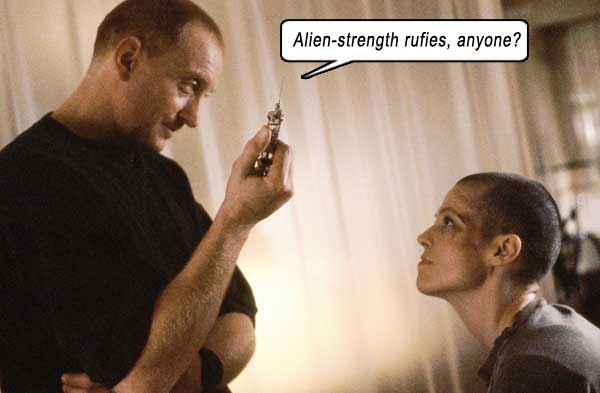 Amongst the paranoid lifers and repressed death-dealers who have forgotten the scent of a woman, Ripley finds an almost well-adjusted ally in prison doctor Clemens (Charles Dance), and butts heads with the warden (Brian Glover, who loves his “rumor control” announcements) and his squirrelly first mate (Ralph Brown), trying to alert them to an alien infiltrator on their outpost. She finds out soon enough that not only did an adult xenomorph hitch a ride in her module – a babymorph is growing where no one can hear you scream…

Still based on H.R. Giger’s core design, the new Alien creature’s physical makeup reflects the organism it was birthed from – a prisoner’s Rottweiler dog; sleeker, faster, more bestial than its predecessors. Amongst the ochre corridors, it races like a canine beast, up and around the walls without stressing gravity. Victims are taken reminiscent of the beasts of Africa, plucked off one by one from the herd, struck at from blackness, dragged through hatchways, while seething acid blood scars through floors and panels.

In this simple yet effective story, the prisoners band together under Ripley’s stewardship to coax the creature into a liquid metal hell, using themselves as bait. 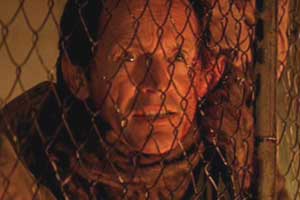 Meanwhile, The Company is sending an envoy to extract Ripley from the planet because, once again, their prime objective is the babymorph, with zero survival considerations for the human host. And they send – android Bishop! Hooray! (He prefers the term “artificial person” himself.) But it’s not another Bishop android – he says he’s The Real Thing. Lance Henriksen as Bishop employs his most velvety brogue to tempt Ripley into giving up the contents of her womb. He tells her he’s here to help, he’s here to “take it out of you” (replete with iconic hand gesture) and that he is the man whom the Bishop android was modeled on. The company thought to send a friendly face… But we know the truth. Lance Henriksen is an android. Hooray!

During the finale’s grand sacrifice, the majestic orchestral score of Eliot Goldenthal sweeps our senses to a bittersweet conclusion.

Like most franchises, ALIEN 3 truly was the conclusion of a trilogy. Even though it barely made its production budget back and was considered a financial flop, like most franchises that continue past their point of diminishing returns, its established audience worked towards its – ahem – “resurrection” five years later. All those fans and critics that couldn’t appreciate this more sober outing, were mostly those desensitized by the headrush of the previous film. Mostly.