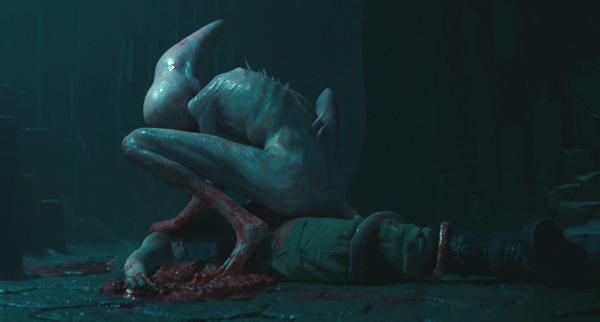 As long as you have a face, I’ll always have a place to eat.

In space, no one can hear you mandroid.

Back in 1979, ALIEN was all about the Aliens. Now it’s about the mandroids. And no wonder. The resident mandroid in ALIEN: COVENANT is Michael Fassbender.

And haven’t I always effused over Michael Fassbender’s magnetic onscreen presence? Unwittingly or not, he has become the focal point of the modern ALIEN saga. Since the last ALIEN installment, PROMETHEUS (2012), his “synthetic human” David has been searching for the purpose of his existence almost as sagaciously as his human crewmate counterparts. In COVENANT, he finds his truth. The hissing, stabbing, disemboweling titular Alien xenomorphs are mere stepping stones in his path to robot redemption…

And I love it! I can already hear the whining that this particular story tack does not serve the greater ALIEN universe, and I can surely see the problems inherent in trying to pass this movie off as mid-part of a trilogy that is prequel to the original ALIEN movie, however, writer-director Ridley Scott (though he creates connectivity with ALIEN through the gradual appearance of the opening titles, camera techniques, sound design and creature design) opens a compelling hive of ideas in making Mankind’s ultimate fate decided by Mankind’s own creation.

This ain’t your daddy’s Bishop…

ALIEN: COVENANT is a majestic, foaming, throat-rending serpent of a film with concepts that will blow your mind as well as your chest cavity, production values that stun with their technical detail, shot through with a stark, madness-inducing soundtrack (by Jed Kurzel) that is not so much music as steel teeth on shoulder blades.

It is 2104. On her seven-year journey to the nearest habitable planet, the colonization starship named Covenant, transporting 2000 hypersleeping humans and 1000 embryos, with a crew of 15. Woken from their slumber by a solar flare, the crew receives an emergency transmission from a passing planet. They detour to investigate… (hmm, this sure sounds like an ALIEN movie, like, you know – ALIEN).

A malfunction in their sleeping pods burns their captain alive (James Franco cameo) and makes the crew uneager to resume their hypersleep to the distant planet, so, discovering the passing planet is habitable, they ponder on putting down roots. Until something in the air infiltrates two crew members and bursts fully-formed from their spines. Until something comes screeching from the dark to take chunks out of their hides. Until something leaps onto someone’s face and drives its feeding tube down their gullet…

In a prologue, we meet Fassbender as android David, already cultured and educated at his “awakening” by his creator Weyland (Guy Pearce). He names himself when he casts his gaze over Michelangelo’s David. Last we saw of him, David’s dismembered body (and still-functioning head) was onboard a “horseshoe” alien craft piloted by Noomi Rapace, bound for the planet of the Engineers…

The spaceship Covenant also has its Fassbender, the same model android called Walter. (But – because it’s Fassbender – Walter has a different accent and demeanor to David!) As Walter helps the crew against a night attack by ferocious assailants, a hooded David comes to their rescue. One of the coolest moments in the film is when David pulls back his hood – and no one is surprised it’s a Fassbender android. Besides, what’s better than one Fassbender? Why, TWO Fassbenders of course!

David, his Iggy Pop hair long and stringy, gives Walter a curt “Hello brother,” as he passes him. 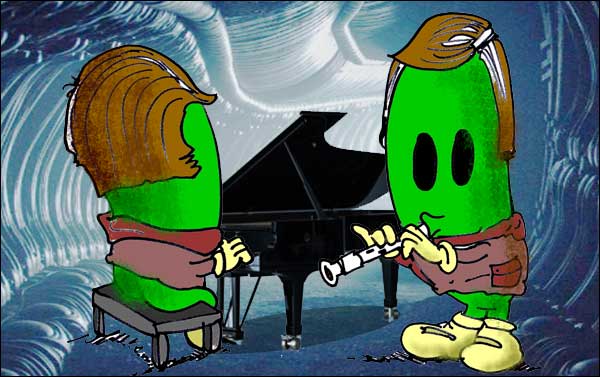 What incredible visuals! By the time David is leading the crew to a stony haven through a city of scorched corpses, we have already been inundated by so many jaw-dropping sights: the solar sail on the ship (as Sagan once predicted), seeing storms in the atmosphere of the planet as they descend, the landing pod coming in over the lake, between mountains; as the emergency beacon is neared, the scarred jungle and then – one of the most satisfying payoffs in recent cinematic history – the crash-landed horseshoe spaceship!

To say nothing of the subtle visuals – like the two Fassbender androids onscreen at the same time, where the camera is panning across and around them constantly, seamlessly; they both put their hands on a recorder to play it together, they fight in closeup, they – kiss! (Even Fassbender cannot resist Fassbender!)

Ridley Scott once again populates his crew with tough females, but their roles pale beside that of the android; they now seem like stock inclusions, vestigial ghost notes of Ripley. When The Fassbender is onscreen, no one is usurping his spotlight.

Katherine Waterston is Daniels, ad hoc Ripley. Billy Crudup is ad hoc captain, Oram. And in a daring bit of stunt casting, Danny McBride is Texan pilot Tennessee (replete with cowboy hat and toughguy cred). The rest of the crew (Demian Bichir, Carmen Ejogo, Callie Hernandez, Amy Seimetz, Jussie Smollett) is here to provide breakfast, lunch and dinner for the Aliens. Viewers have complained that the ship’s crew being paired into married couples does not stir much empathy when their characters are never fleshed out enough to care. (Feasting Alien looks up: “Someone say ‘flesh out’?”) Thus, Daniels lost not only her captain in Franco but her husband. A shred of empathy peeks through, but not enough to– (Feasting Alien: “Someone say ‘shred’?”) 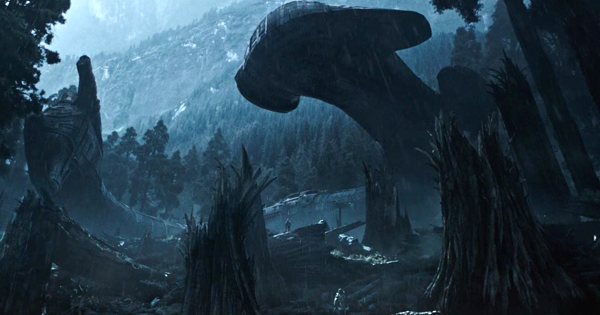 The grandeur of interstellar horseshoes.
[Note the tiny man on a rock in center frame.]

For those who complain ALIEN: COVENANT does not ask the “big questions,” there’s not much bigger than the origin of our species itself. And just like discovering the universe makes us small and insignificant, what humbling speculation to ponder on better genomes than ours inventing us as offhandedly as we would any robot, to entertain and serve at their behest, and then to discard without any compunction.

To us, David’s quandary may seem: Is he Adam, the first of a species, instilled with the right to spawn his own kind? Or is he Lucifer, the light bringer, the fallen angel ripped from heaven, bequeathed powers that he is exhorted not to use? (David: “Serve in Heaven or reign in Hell?”) His ultimate actions tell us David sees himself as much more celestial than those earthbound entities – he considers himself a god; hence, his amorality, when it comes to his part in the fates of the Engineers and Noomi Rapace…

As we, the creations, see ourselves as the heroes against our creators, the Engineers, Ridley Scott has re-framed the ALIEN franchise as peeking out through the eyes of the android, David, who sees himself as the hero against his creators, Humans. Endowed with the will to create, he has no time for empathy or frailty. He said in PROMETHEUS: “Sometimes to create, one must first destroy.”

Here, with his secret Alien breeding experiments, he has graduated to Percy Bysshe Shelley’s Ozymandias, “My name is Ozymandias, king of kings / Look on my Works, ye Mighty, and despair.” He does well to quote that poem, for the rest of it details the ruins of a colossal monument, around which nothing survives. 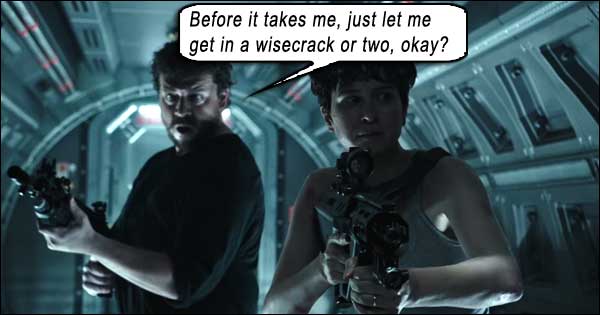 As COVENANT ramps toward its rendezvous with 1979’s ALIEN, we see more connections – the computer is called Mother again, there are corridor scenes following blips on a radar that recall ALIEN, the Aliens start to look humanoid – and we discover WHY these interstellar Aliens mimic our physiognomy. The clues were in ALIEN 3 and ALIEN: RESURRECTION; when that Alien burst from the Rottweiler and assumed a bestial stance, and when Ripley’s genes were combined with the Alien Queen birthing that humanoid monstrosity.

All due to… mandroid Fassbender. We can safely say it was Fassbender artificially selecting Alien-Human hybrids in 2104 that led directly to Sigourney Weaver getting down to her panties in 1979.

Much like Ridley Scott created full-production promotional nuggets for his film THE MARTIAN (which didn’t appear, nor were ever intended to appear, in the finished film), he creates extraneous COVENANT scenes that add to the tapestry of the legacy.