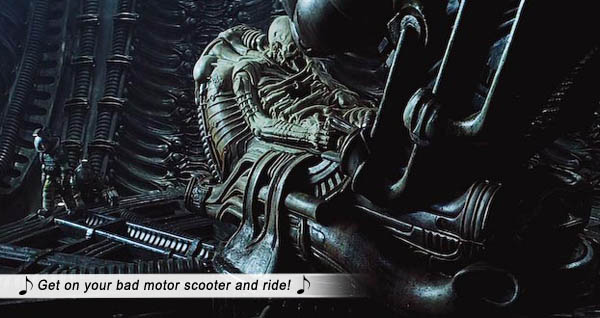 The slogan for ALIEN is embedded in pop culture: “In space, no one can hear you scream.” Even so, there’s an awful lot of screaming going on…

A deep space mining crew investigates a distress signal from an unchartered planet, and inadvertently takes onboard a malignant alien life form. What could possibly happen next, but grisly deaths, cattle-prod battles, flamethrowers, and chicks in panties? 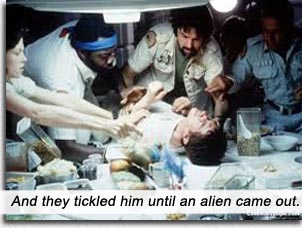 Director Ridley Scott helms a horror movie that is actually horrifying, a space movie where the vacuum of space is treated with helmeted respect, a science fiction movie that is actually scientific fiction; blood-spattering us with an extra-terrestrial organism whose life-cycle is incomprehensible to human evolutionary idiom… everything about this movie is so alien to the Hollywood meatgrinder system, no wonder it’s called – ALIEN.

Aboard the mining vessel Nostromo (what a damn cool name!), leading the ragtag crew is unflappable Dallas (Tom Skerritt), dispassionate science officer Ash (Ian Holm), old Kane (John Hurt, eternally 60), weepy Lambert (Veronica Cartwright, whose constant screaming is so annoying it’s like – oh man! Y’know, I don’t even feel like rescuing you now with all that puffy-eyed crying and snot running down your nose…), journeyman mechanics Yaphet Kotto and Harry Dean Stanton (griping about wages and overtime), and Lieutenant Ellen Ripley (Sigourney Weaver, strikingly young and man-sexy, her lethal jawline smooth like a baby’s angular bottom). Unbeknownst to all of us at the time, this movie would rocket her to superstardom as a fem-dom icon, who would yet never lose her womanly allure. (Her salary alone for 1997’s ALIEN: RESURRECTION would equal the production cost of ALIEN – $11 million.) 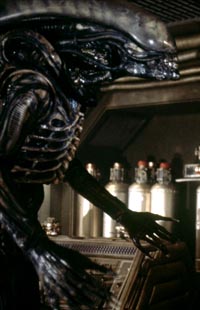 And haunting the darkened passageways of the Nostromo, the intruder, the infiltrator, the Alien – a creature of sensual nightmare conjured by Swiss surrealist H.R. Giger. A creature with a lifecycle created from whole cloth by writers Dan O’Bannon and Ronald Shusett – from egg to “facehugger” to “chestburster” to xenomorph, double-jawed and iron-clawed, with a steel-belted exoskeleton and acid for blood. Immediate lifetime membership in the pantheon of immortal screen monsters…

ALIEN would meld two classic genres: science fiction and horror, using a device as old as Vincent Price – the haunted house. And the stupid cat jumping out of nowhere.

The Nostromo reminds us of the best aspects of Monty Python set dressing: everything onboard looks worn and tired, well-used and wasted. A perfect setting for a haunted tale, where Dallas would go creeping through pitch black claustrophobic air ducts, with something on the radar blipping towards him… The ship is not a shiny technological marvel, it is a utilitarian warhorse, such an acclimated crawlspace for its crew they never exhibit that “soldierly” attitude toward being onboard a spaceship; they behave like they’re on a vessel at sea, with a camaraderie and familiarity that bespeaks this is not their first rodeo.

The breakfast scene where John Hurt is suddenly overcome by the “chestburster” is a marvel of naturalistic overlapping dialogue – and sudden gutshock terror, as a tiny, blood-meat thing squeals at the crew from Hurt’s innards. (The reactions of horror from the cast are apparently a result of them not knowing how ferocious this stunt was going to be.) The breezy performances also remind us of the best Spielberg movies of this era – CLOSE ENCOUNTERS, JAWS – where the acting sold the story as much as the plot and effects.

And ALIEN did not shirk on its effects. Ridley Scott was not going for space-battle action, but a sober and eerie reality: a spaceship that slowly spun for artificial gravity, only brief shots of the alien creature (inhabited by rail-thin Bolaji Badejo); the ship’s computer, nicknamed “Mother,” interfaced with all the green-texted “computers” (big-keyed typewriter-descendants that now look hokey); with H.R. Giger’s machine-flesh designs passim, from the ship’s innards to the elephantine “space jockey” discovered ossified in his seat in the horseshoe spaceship on the planet of the howling winds…

Let’s step back in time for a moment: Remember that feeling of awe seeing that elephant-skulled alien in that reclined seat? We had seen Lucas’s Cantina Sequence, we had seen Cylons and Sleestak and Kirk’s green-skinned bitches, yet Giger’s disturbing visual brought not only an otherworldliness to the production, but opened a million questions – “So are there other alien races that humans know of but choose to ignore?” “Was this extra-terrestrial just another miner or scientist?” “Do these aliens know of humans and Earth?” – and left them all unanswered.

A simple plot, but Darwinian in execution. We feel no pity for the Alien and it evokes no sympathy, but we realize it is killing because it is geared purely for survival. Ash tells us so, in another disturbing sequence where he is beheaded and discovered to be – a cyborg, hidden in plain view amongst the crew! His disembodied head is electrically charged back to pseudo-life and he reveals another layer of subplot – the mining corporation empowered him to bring back this death-dealing Alien species over the priorities of the human crew. And in a bizarre irony, Ash – oh, clinical, pedagogic Ash – reveals emotion. But not in the direction we’d expect. He lovingly praises the evolutionary primacy of the Alien species until Ripley interjects in horror, “You admire it!” He felt less empathy towards the species he was modeled after, his purely mathematical brain gravitating toward the species better equipped for survival and procreation.

The false reprieve – where Ripley gets down to her vulva-licious hip-bone panties – and then the full reveal of the Alien in a guttural climax will leave you shuddering in adrenaline, as the best-adapted creature wins out; the most ferocious animal the cosmos has ever birthed, the organism with the most ruthless killing skills against Man – Woman.

“Nostromo”
is Italian for “shipmate” or “boatswain”, but the name could also be considered a corruption of the Italian phrase “nostro uomo,” meaning “our man.” (Wikipedia.)

Is any of this relevant to the naming of the ship in ALIEN? Who knows? It’s just a damn cool name.

Alien then and now.
Watch the trailer for ALIEN (below) and we suddenly realize how cohesive Ridley Scott’s vision was/is for his most recent Alien entry PROMETHEUS (2012).

The trailer starts slow and foreboding, and then takes our breath away with its chilling sound design and incomprehensible visuals. It’s eerie and disturbing and we have no idea of the plot. Yet we feel compelled to view the movie. The trailers for PROMETHEUS utilize the same method, with virtually the same chilling sound design. And no cats.