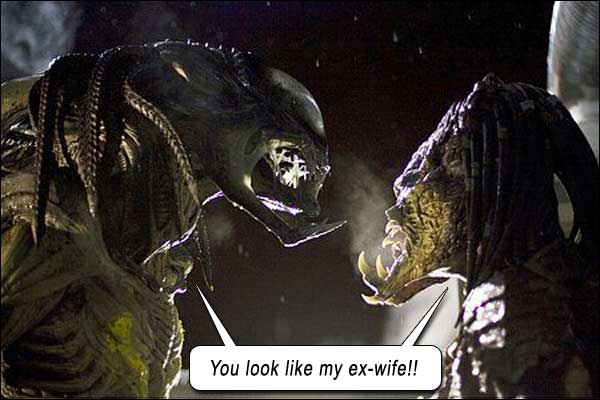 Requiem for a Dweeb.

Hundreds of Aliens. One Predator. No actors.

The splash-slogans on the DVD packaging of ALIENS VS. PREDATOR: REQUIEM scream at us louder than the Predator’s roar: “More Blood… More Guts… More Gore!” Pretty much guarantees a maximum rating of five cucumbers out of ten – if everything else is top-notch. Everything else is not.

Story picks up exactly where we thought it had thankfully ended in the last movie, AVP: ALIEN VERSUS PREDATOR (2004), with a cute Alien busting through the chest of a Predator onboard a Predator rescue ship. Sporting Predator-like quad-jowls (therefore affectionately called Pred-Alien by the film-makers), the little tyke quickly dispatches all the supposedly-tough Predator warriors onboard and crash-lands the ship back on Earth in a small town called Sequel Land. Whereupon Pred-Alien starts laying eggs, whereupon face-huggers face-fuck every human in sight, whereupon chest-bursters emerge, and Aliens over-run Sequel Land.

A decidedly hyper-masculine Predator from Predator Planet receives the auto distress signal from the downed Preda-ship and takes the express Sequel Rescue Ship to Earth to take on this Pred-Alien who unceremoniously capped his Predapeeps (even though there was a Predator mother ship that was just leaving Earth orbit, all those Predators apparently too insubordinate to be stop-lossed and turned around to return the few hundred miles to Earth).

But think about it: if the Pred-Alien can kill Predators so efficiently while still a tiny chest-burster, imagine her lethality when she grows into one of H.R. Giger’s rubber suits. And only ONE Predator goes back for the clambake?

Like the last film, it’s another B-Actor hoedown, everyone conveying just enough emotion to get past the audition for a detergent commercial: the ex-prisoner (who looks like a model), the small-town sheriff, the dork pizza delivery guy, the college jocks, the salubrious chick who digs the dork, but jacks the jocks… But that’s why there’s “more blood, more guts, more gore!” – more distraction.

Credit where it’s due: the Alien character was created by Dan O’Bannon and Ron Shusett (ALIEN, 1979) and the Predator character was created by Jim Thomas and John Thomas (PREDATOR, 1987). Though this movie launches another salvo that only aids marketing synergy and recognition, I can’t help feeling a little sorry for the crafters of these once-ominous alien beings, their legacies being smeared more heinously than the Republicans smear men of honor and vision.

Directed by The Brothers Strause (Colin and Greg, two effects supervisors whose best work as directors could definitely be said to be in front of them), REQUIEM boasts many staff who worked on both PREDATOR and ALIEN franchises; movie also retains the ominous elements of the PREDATOR soundtrack – those tribal drums, coupled with that eerie music.

Then Ripley turns up.

Well, not exactly. One of the human stories shows a female Marine returning home to find her daughter has bonded closely with her husband. Struggling to regain her daughter’s trust, an Alien comes to her rescue – as her husband is mangled by an Alien, she doesn’t hesitate: grabs the kid and hi-tails it like Jackie Onassis off the back of that limo in Dealey Plaza – so much for “leaving no one behind.” She and the prison model rally the puny humans into fighting back. And fail. Need more testosterone than that to be Ripley, honey…

Then there’s a government guy who obviously works for even less than Lance Henriksen. But kinda looks like him if you squint real hard. He’s the baddie (cos he’s from The Government, see?).

As the Aliens rip into the townsfolk, who all use magical guns (Happiness is never having to reload), the Predator, who is all alone against hundreds of Aliens, shows he’s a pretty resourceful son-of-a-predatoress by using his gadgets and superior intellect (so who died and made the Predators the good guys?) in attrition against the Aliens until there remains only him and the Pred-Alien.

And what happens to all the B-actors? Who cares?

Hundreds of clichés. One script. No kidding.